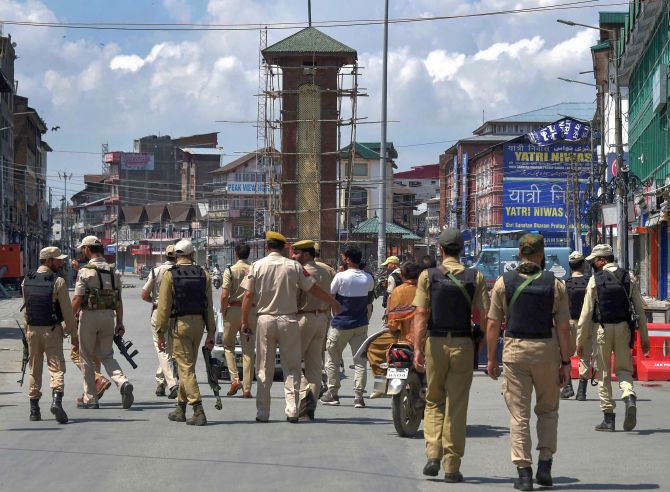 Life was slowly returning to normal in Jammu and Kashmir with the authorities further easing restrictions on Tuesday, officials said.

Restrictions were relaxed in 136 police station areas, out of total 197, in Jammu and Kashmir.

Barricades around the Clock Tower in Srinagar's city centre Lal Chowk were removed after 15 days, allowing the movement of people and traffic in the commercial hub, as restrictions eased in several localities while continuing in others.

He said attendance and schools and government offices increased across Jammu and Kashmir.

More landline phones were made operational on Tuesday. Over 73,000, out of total about 99,000, landlines phones were functional across Jammu and Kashmir, he said. 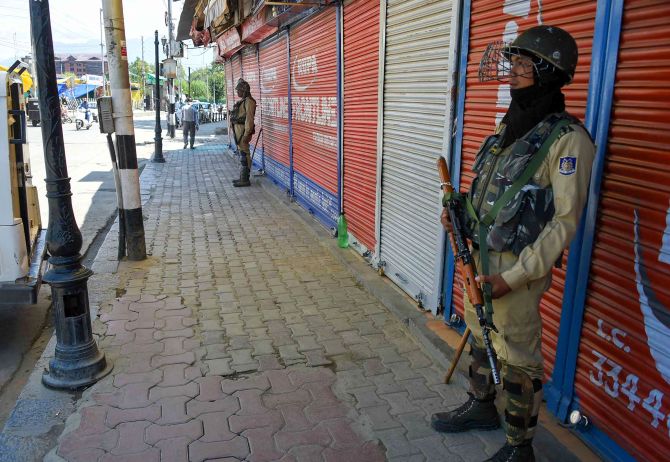 There was increased traffic flow in some parts of the Civil Lines areas of the city but curbs on movement persisted in Downtown Srinagar and in many parts of the Kashmir Valley, officials said.

Though restrictions were lifted in several places, the deployment of security forces continued to ensure law and order, they said.

A lot of private cars were seen plying in Dalgate, Boulevard, Sonwar, M A Road, Rajbagh and adjoining areas. Some inter-district cabs also plied in the morning, they said.

Vehicles plied between districts in the valley as well.

Markets in the Valley were shut.

The officials said the situation has remained largely peaceful since the Centre announced the abrogation of Article 370 and the reorganisation of Jammu and Kashmir into two union territories on August 5. 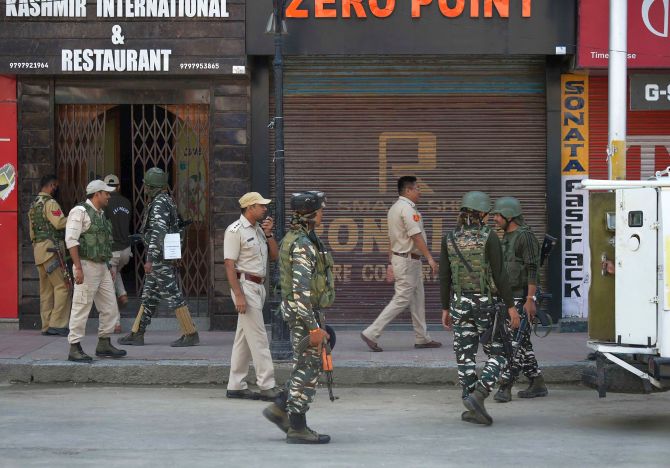 IMAGE: Barricades around the Clock Tower in Srinagar's city centre Lal Chowk were removed after 15 days, allowing the movement of people and traffic in the commercial hub. Photograph: S Irfan/PTI Photo

There were clashes between groups of youth and security forces in several parts of the Valley but authorities said the situation remained peaceful with few injuries reported.

Restrictions in many areas of Kashmir are being eased gradually since Saturday -- first for six hours in 35 police stations across the Valley and then for eight hours in 50 police station areas.

On Monday, the authorities made all necessary arrangements for the reopening of primary schools in the Valley, including 190 in the city. However, there were no students in most schools, particularly private educational institutions.

The civil secretariat -- the seat of the Jammu and Kashmir government in Srinagar -- witnessed about 98 per cent attendance on Monday, while attendance in other government offices is improving, the officials said.

The government spokesperson said there was adequate stock of essential commodities.

The officials appealed to people to not resort to panic buying.