Moderate to high polling was recorded on Tuesday in by-elections to 54 assembly constituencies in 10 states despite the shadow of COVID-19 pandemic, with nearly 70 per cent turnout in 28 seats in Madhya Pradesh where the results will decide the fate of the seven-month-old Bharatiya Janata Party government. 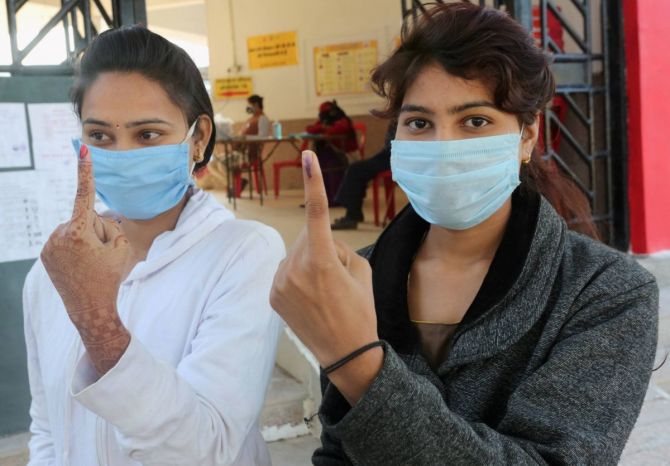 Stray incidents of clashes between Congress and BJP workers were reported in MP and one person was injured in firing in Morena district, according to officials in the state.

Elsewhere, polling was by and large peaceful as voters, wearing masks and gloves, queued up at polling booths where election staff in personal protective equipment (PPE) suits assisted them during the first pan-India electoral exercise in the pandemic.

"The electoral exercise going on in the country is by far the largest exercise in the world amid the pandemic ...the voter turnout in the first phase has been exceptionally good.

"The voter turnout has further continued and the confidence level has been much more in this phase," EC Secretary General Umesh Sinha said.

The bypolls coincided with the second phase of assembly elections in Bihar. Counting of votes will be held on November 10.

While Pungro-Kiphire seat in Nagaland saw the highest voting of 89.8 per cent, the turnout was the poorest in Rajarajeshwari Nagar in Karnataka at 39.15 per cent, according to figures from officials of respective states.

In most of the other seats the polling figure was above 50 per cent.

Prime Minister Narendra Modi and other leaders had urged the people to vote in large numbers.

An average of over 53 per cent voters exercised their franchise in seven seats in Uttar Pradesh, where 88 candidates were in the fray, according to state election officials.

Six of these seven seats were held by the BJP, while the Malhani seat in Jaunpur district was with the Samajwadi Party.

"Everyone should exercise caution and discharge the duty of casting vote. Democracy will win, coronavirus will lose," Chief Minister Yogi Adityanath tweeted earlier in the day.

BJP candidate Sangeeta Chauhan for Naugaon Sadat seat in Amroha district alleged "fake" voting in her constituency and demanded that those wearing the burqa should remove the face cover to enable poll officials ascertain their identities.

The chief electoral officer told PTI that he would look into the allegations.

People at some places in Tundla constituency in Firozabad district boycotted the by-election, alleging there was no development in their area. On Tuesday, voters in 28 constituencies in MP decided the fate of not just 355 candidates, including 12 ministers, but also of the Shivraj Singh Chouhan government which needs at least eight more MLAs for a simple majority in the assembly.

Voters seemed to have brushed aside the fear of coronavirus as they flocked to polling booths.

A turnout of of 69.93 per cent was recorded and would be updated later, state officials said.

Both Chief Minister Shivraj Singh Chouhan of the BJP and Congress leader and former CM Kamal Nath claimed that high turnout would favour their respective parties.

The average voting percentage in the 2018 Assembly polls in these 28 constituencies, most of them in the Gwalior-Chambal region, was 72.93.

Congress veteran Digvijaya Singh questioned the use of Electronic Voting Machines (EVMs), saying the device is prone to hacking.

Chief Minister Shivraj Singh Chouhan responded to Singh, stating that the Congress has already sensed its defeat and hence its party leader is finding fault with EVMs which are being used in India for decades.

In Morena district, Congress and BJP supporters clashed at the Jatavara polling booth and an unidentified person fired a bullet during the incident, Superintendent of Police Anurag Sujania said.

"A person was injured," the official said.

In Bhind, Collector Virendra Singh Rawat said they received a report about gunshots being fired near a booth in Sondha village under Mehgaon Assembly constituency. The report was being verified, Rawat said. 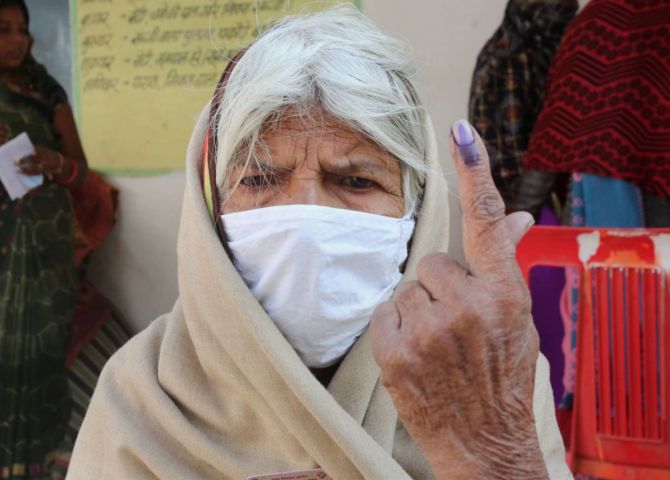 The Congress had sitting MLAs in 27 of the 28 seats going to the polls. Twenty-five resigned early this year and joined the BJP after a rebellion by Jyotiraditya Scindia, leading to the collapse of the Kamal Nath government.

They are now contesting as BJP candidates. In the three other seats, the by-election was necessitated following the deaths of the sitting legislators.

In Madhya Pradesh, Gujarat and Karnataka, the saffron party is fielding 31 candidates who had won on a Congress ticket but switched sides and resigned, necessitating the bypolls.

Workers of the ruling BJP and opposition Congress came to blows outside a polling booth in Gadhadha town over alleged bogus voting. The police separated the two groups.

Bypolls in the state are being held in these seats after Congress MLAs resigned ahead of the Rajya Sabha polls in June. Five of them later joined the BJP and are contesting again.

Nearly 68 percent voters exercised their franchise in Baroda seat in Haryana which had recorded 69.43 per cent polling in the 2019 assembly polls.

There were 14 candidates, including Olympian wrestler and Bharatiya Janata Party (BJP) nominee Yogeshwar Dutt, in the fray for the seat, which has around 1.81 lakh registered voters.

Before casting his vote in the morning,  Dutt offered prayers to Lord Hanuman at his village.

The seat had fallen vacant in April following the death of Krishan Hooda, who had won it consecutively thrice in 2009, 2014 and 2019 assembly polls.

Poor voter turnout was recorded in Rajarajeshwari Nagar bypoll in Karnataka at 45.24 per cent, while 82.31 per cent of voters exercised their franchise till 5 pm in Sira constituency.

The death of Sira JD-S MLA B Satyanarayana in August and the resignation of RR Nagar Congress MLA Munirathna from the assembly last year led to the bypolls.

A high voter turnout of 77 per cent was recorded in the bypoll to Marwahi assembly constituency in Chhattisgarh.

Voters who had tested positive for COVID-19 were still in the premises of some polling stations to cast ballots even after the end of official voting time, he said.

The death of former chief minister and JCC-J legislator Ajit Jogi necessitated the by-election in the seat.

About 82 per cent polling was recorded in Dubbak assembly constituency in Telangana.

The administration facilitated voting for Covid-19 patients from 5 pm to 6 p and 11 such people exercised their franchise, sources said, adding 70 positive people had opted for postal ballot.

Earlier in the day, the Congress complained to the Election Commission and the state DGP about a social media post, made to appear like the news broadcast of a prominent TV channel, that Congress candidate in the Dubbak bypoll Cheruku Srinivas Reddy switched over to the ruling Telangana Rashtra Samiti.

Though 20 others are also in the fray, the main contest was among the candidates of the TRS, BJP and Congress. Around 62.51 per cent of total 5.63 lakh voters cast their ballots in the by- elections to two assembly seats in Jharkhand.

The voter turnout was 65.27 per cent for Dumka reserved seat and 60.30 per cent for Bermo seat in Bokaro district, the Chief Electoral Officers office said.

From the morning electors were seen standing in queues in polling booths by maintaining social distancing. They were given masks, sanitiser and gloves, officials said.

Over 70 per cent of total 4.67 lakh voters exercised their franchise in by-elections to two assembly seats in Odisha.

Balasore seat recorded 71 per cent polling, while 69.9 per cent of voters in Tirtol constituency in Jagatsinghpur district cast their ballots during voting held from 7 am to 6 pm.

The BJD and the BJP had won Tirtol and Balasore respectively in the 2019 assembly elections.

Two polling personnel were removed from a booth in Balasore following complaints about attempts to influence the voters, while police was looking into media reports about alleged distribution of money by a woman, also in Balasore, officials said,

The voters with symptoms of COVID-19 and high body temperature were given a token to cast their votes at the end.

A total of 84.41 per cent votes were cast in the 22 polling stations under Southern Angami-I constituency in Kohima district while Pungro-Kiphire segment which has 77 polling stations saw a turnout of 89.8 per cent in Nagaland.

There were complaints from both ruling Nationalist Democratic Progressive Party (NDPP) and opposition Naga Peoples Front (NPF) under Southern Angami-I seat but it didn't disturb the polling, officials said.

In Pungro-Kiphire seat, polling in Singrep village was adjourned due to disturbance following a clash between supporters of two parties.

The returning officer and district election officer Kiphire have also submitted the report and a new date would be fixed for fresh poll, they said. 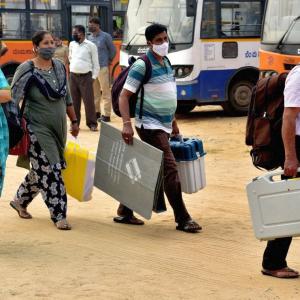 Bypolls to 54 assembly seats in 10 states on Tuesday