Twelve people, including an infant and seven women, were killed and 11 others injured when a four-storey residential building collapsed in suburban Ghatkopar on Tuesday, civic officials said. 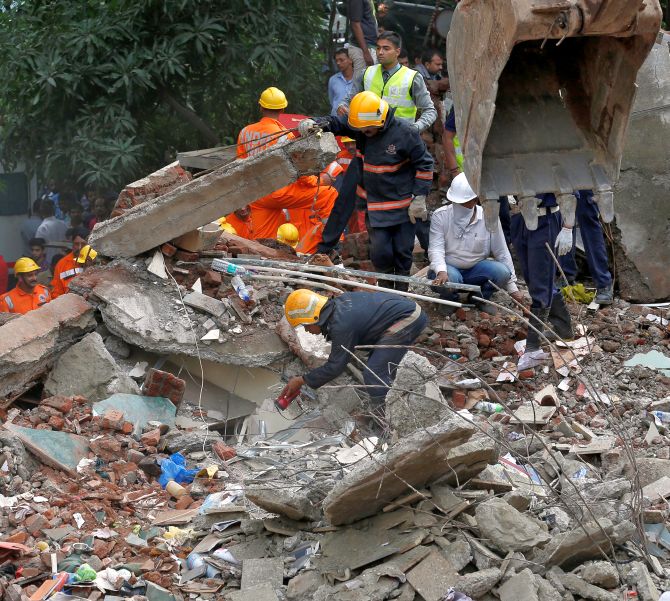 IMAGE: Firefighters and rescue workers search for survivors at the site of a collapsed building in the suburbs of Mumbai. Photograph: Danish Siddiqui/Reuters

According to residents of the ill-fated Siddhi-Sai Cooperative Housing Society, the pillars of the building got weakened due to ongoing renovation of a nursing home located on its ground floor, reportedly owned by a local Shiv Sena leader.

“Until 9 pm, 23 people were extricated from under the rubble, out of whom 12 were declared dead while 11 injured have been admitted in various hospitals,” said Mahesh Narvekar, Head, Disaster Management cell, Brihanmumbai Municipal Corporation.

Out of the injured, six persons were discharged later in afternoon, he said.

When asked whether the search and rescue operation was called off, the officer said it would continue. 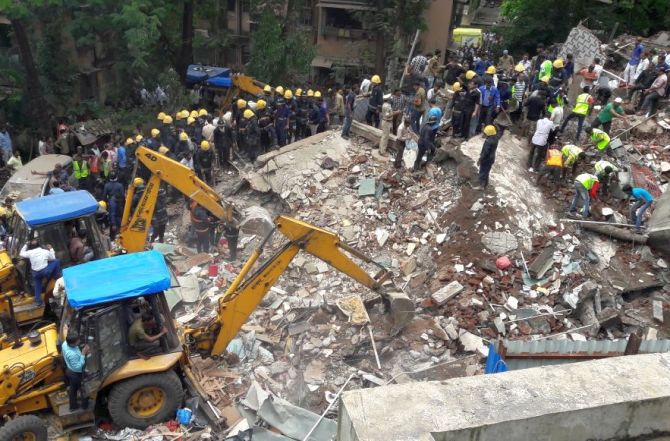 IMAGE: A total of 60 National Disaster Response Force jawans along with sniffer dogs were pressed into service. Photograph: Sahil Salvi

A total of 60 National Disaster Response Force jawans along with sniffer dogs were pressed into service. According to the official, sniffer dogs helped in rescuing two people alive from under the debris.

“An offence has been registered and police are investigating. I have directed the commissioner of BMC to investigate and submit report within 15 days,” he said. 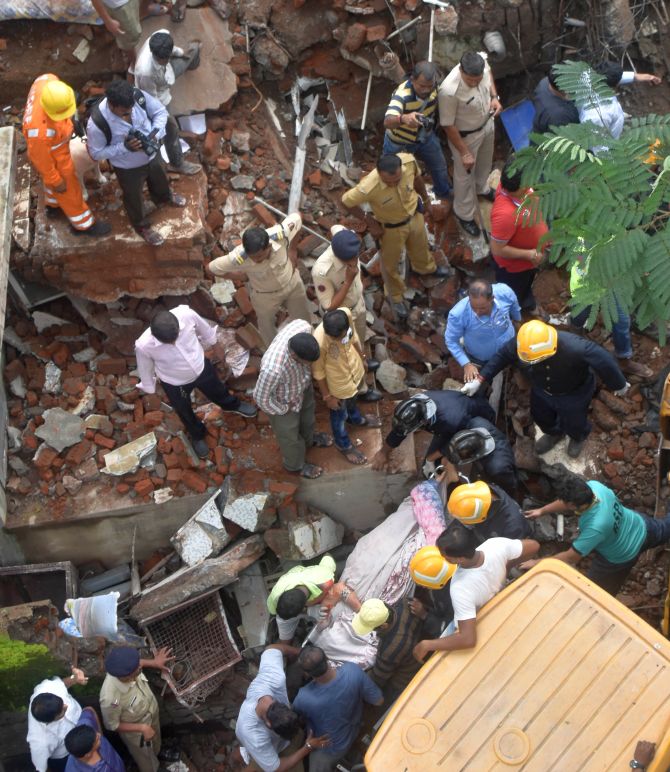 Meanwhile, the police have detained one Sunil Shitap, said to be the owner of the nursing home on the ground floor of the building.

“Prima facie, it appears that the accused was carrying out illegal renovation in the building. At this juncture, it will not be appropriate to give other details as investigations are underway and available information needs verification,” said Joint Commissioner of Police (Law and order) Deven Bharti.

Sources said Shitap is a leader of the Sena. IMAGE: Search operations was on to extricate the people feared trapped under the rubble.
Photograph: Sahil Salvi

Eyewitnesses said they heard a loud sound, similar to that of lightning in the morning as the building crumbled in a massive heap of rubble.

The structure, located in Ghatkopar’s DamodarPark area, housed around 15 families.

“When I came out of my building, I found a lot of dust, cries of people seeking help. I saw parts of the building collapse,” an eyewitness said.

According to a local resident, it was a 35-year-old structure.

The city and its suburbs received heavy rains over the last several days, though there has been some respite since Monday with downpour giving way to intermittent showers.

The Mumbai Police blocked the traffic on Lal Bhadur Shastri road to provide a ‘green corridor’ to rush those rescued to hospitals. 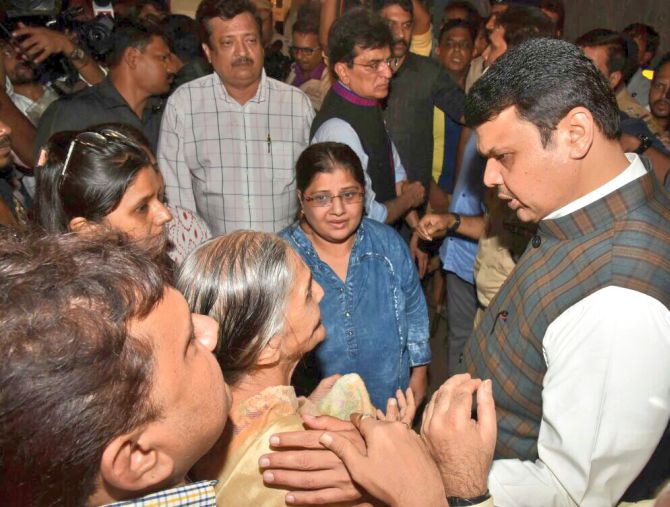 IMAGE: Maharashtra CM Devendra Fadnavis visited the site and consoled the victims' families. He also assured that quick action will be taken against the culprits. Photograph: @dev_fadnavis/Twitter

Rajesh Diyora, a resident of the ill-fated structure, said some commercial activity was being carried out on the ground floor and that might have led to the collapse.

The building was not listed among those in dangerous category, as per local residents.

According to a written reply by the government in the Legislative assembly about unsafe buildings in the metropolis, a survey by the BMC earlier this year had identified 617 such structures.

These buildings were termed as “dilapidated” in the survey report. The BMC has initiated action on the report under the Mumbai Municipal Corporation Act, 1888.

In all, 112 such buildings were vacated, while 42 were referred to the technical advisory committee to decide their fate.

The BMC has also submitted an affidavit in the Bombay high court regarding 45 buildings identified as dangerous for habitation where people continue to live. 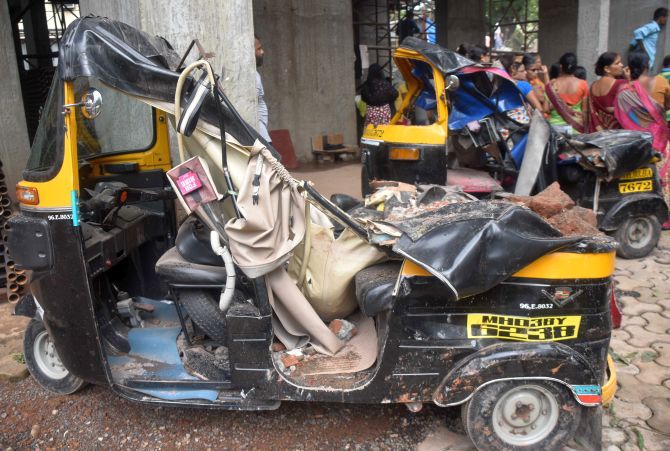 IMAGE: The affected people and the survivors have been moved to three municipal schools nearby.
Photograph: Sahil Salvi

Meanwhile, Narvekar said the civic body has shifted the affected people and the survivors in three municipal schools nearby.

Locals who helped the fire brigade and NDRF jawans said the building seemed to be in a “good condition” and it couldn’t have collapsed without a damage caused to its core structure.

They said the nursing home didn’t have many patients as it was being renovated.

Mumbai Mayor Vishwanath Mahadeshwar visited the spot and said a proper inquiry will be conducted into the incident.

He announced setting up a committee, comprising deputy municipal commissioners, to inquire into the cause of the incident, which he said would submit its report within 15 days. 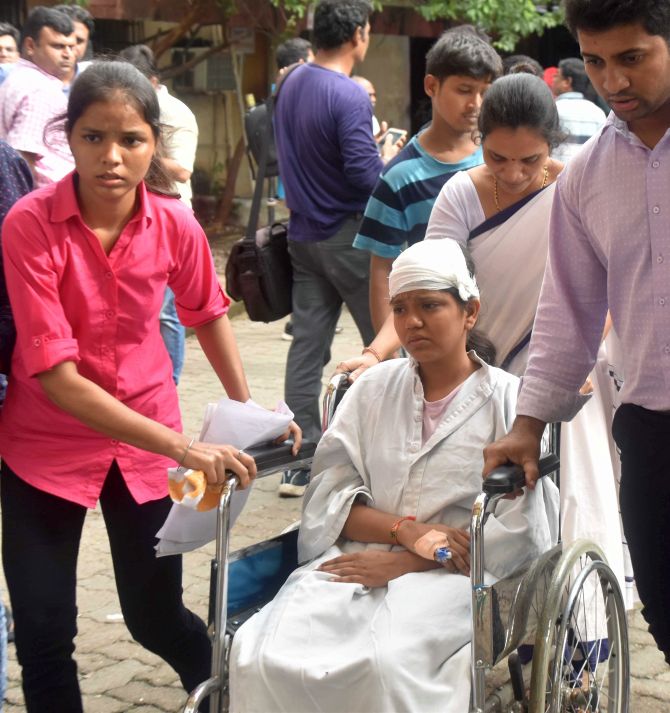 IMAGE: Eyewitnesses said in the morning they heard a loud sound, similar to that of lightning since it is monsoon season. Photograph: Sahil Salvi

After visiting the spot, Congress leader and MLA Naseem Khan said prima facie BMC has failed to curb the ongoing alteration in the building.

“The alteration work involving the building’s core structure was going on since the last eight days, and despite some residents raising an alarm, the BMC’s Engineering department completely failed to act in time.

“I am also told that the civic body did not act against the owner of the nursing home because he is a Shiv Sena leader. If this allegation is true then it’s a very serious matter,” he said.

Mumbai unit Congress president Sanjay Nirupam said the Sena-Bharatiya Janata Party alliance in power in the BMC was responsible for the incident.

“Residents of the building had complained about the illegal alteration being carried out by a local Sena leader, but officials of the BMC just sat on the complaint.

“The building collapsed because the Sena leader had removed a pillar. I demand strictest action against that leader,” he demanded.

However, the BJP group leader in the BMC Manoj Kotak said this is not time to do politics on the issue.

“This is a very unfortunate incident. Our first and foremost priority is to help the survivors and the kin of the deceased. It’s not the time to play the blame game,” he said. 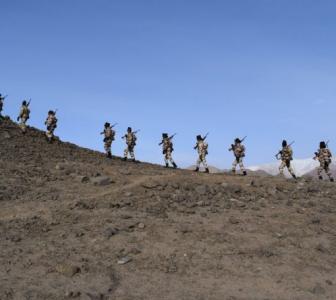 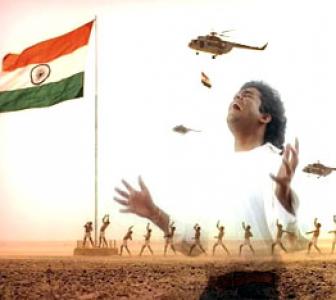 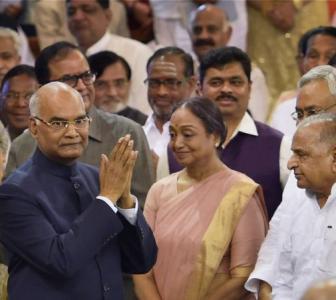 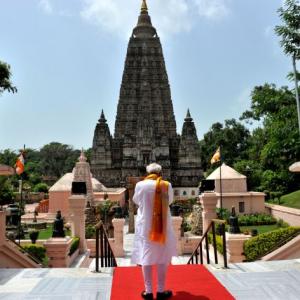 'Why are Hindus controlling the Mahabodhi temple?'