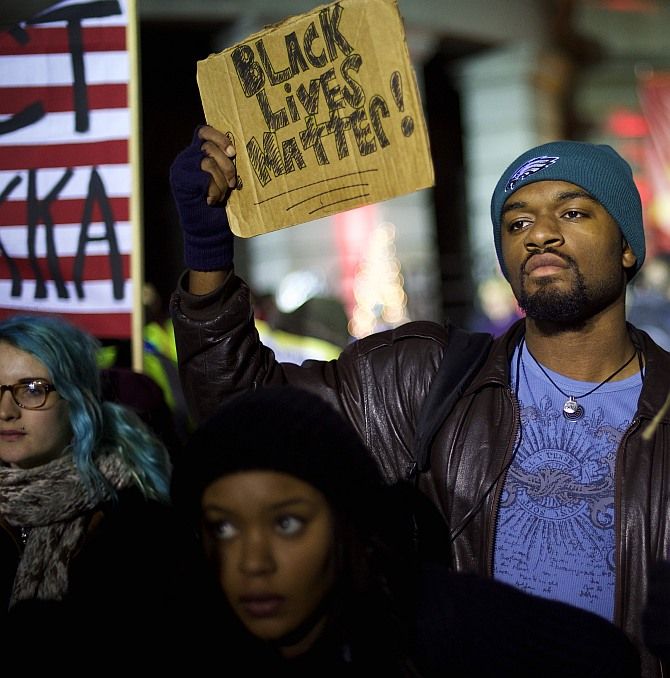 Widespread protests broke out in New York following a grand jury verdict not to indict officers involved in the death of Eric Garner, the unarmed African American man who died after being placed in a chokehold by a white New York police officer last summer.

Garner died on July 17 after being placed in a chokehold by Officer David Pantaleo. The incident was caught on tape and showed that the black teenager was unarmed and posed no threat to the half-dozen officers around him. He was heard on tape saying, "I can't breathe." 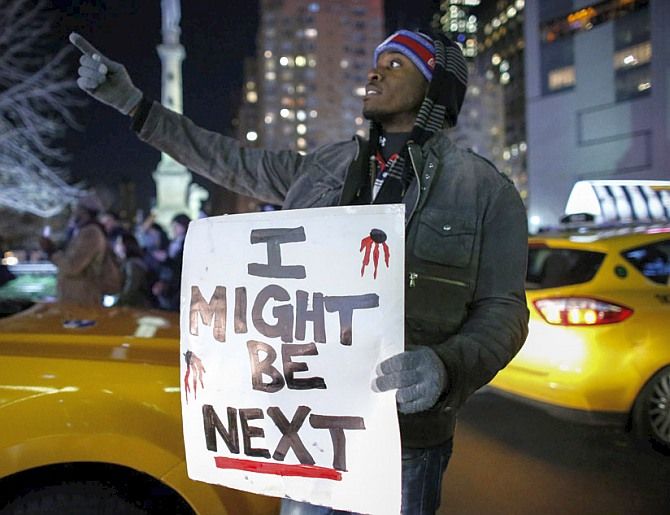 A man holds a sign as he takes part in a protest on 6th Avenue in Manhattan. Photograph: Kena Betancur/Getty Images

The grand jury's decision followed a similar verdict given by a grand jury in Missouri in the Michael Brown case in which the unarmed, black teenager was shot by Officer Darren Wilson in Ferguson.

Angry protesters occupied several parts of the city chanting "no justice, no tree!" to protest against the grand jury's decision. 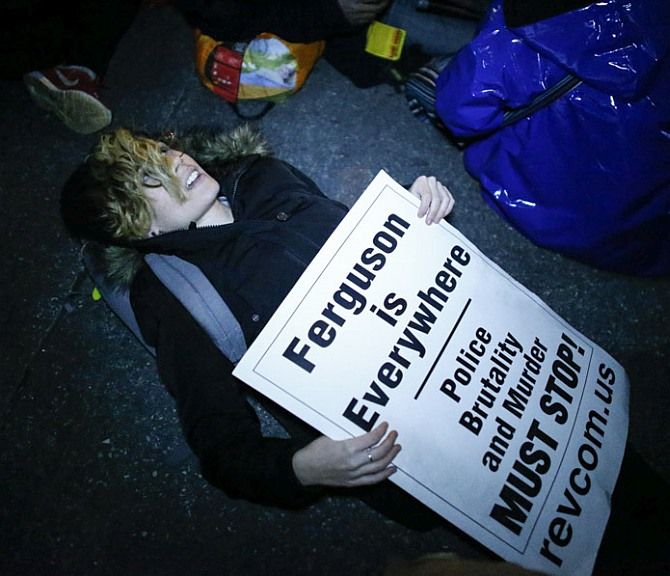 A woman lies down in the street as she takes part in a protest on 6th Avenue in Manhattan. Photograph: Kena Betancur/Getty Images

A crowd of about 50 demonstrators staged a "die in" next to the information booth at Grand Central as cops surrounded them but took no action.

The New York Times and CNN reported that 30 people were arrested during the demonstrations. 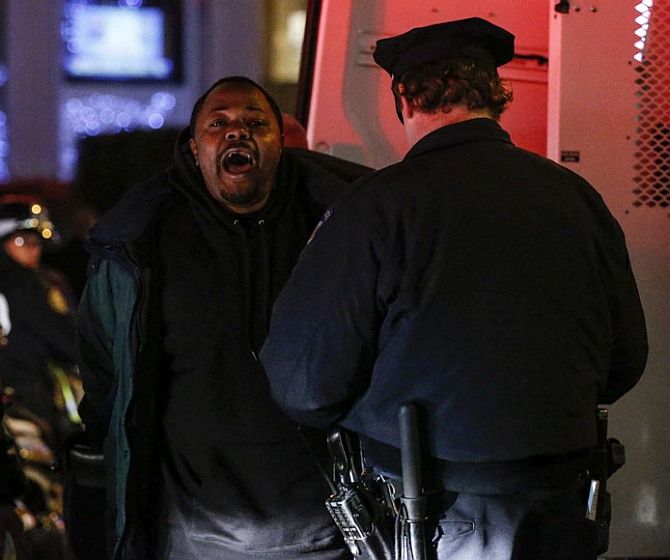 A man is arrested by police as he takes part in a protest on 6th Avenue in Manhattan. Photograph: Kena Betancur/Getty Images 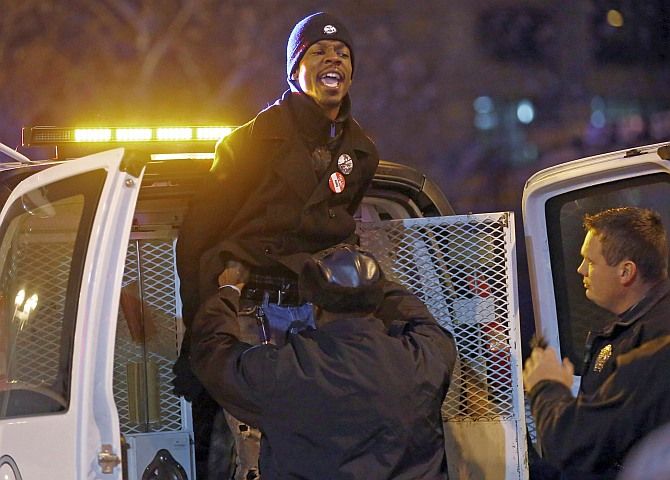 A protester yells as he is detained during a demonstration against police violence and the grand jury decision in the Eric Garner case. Photograph: Jim Young/Reuters

In a statement released on Wednesday night, Pantaleo expressed his condolences to Garner’s family.

"I became a police officer to help people and to protect those who can’t protect themselves. It is never my intention to harm anyone and I feel very bad about the death of Garner," he said. 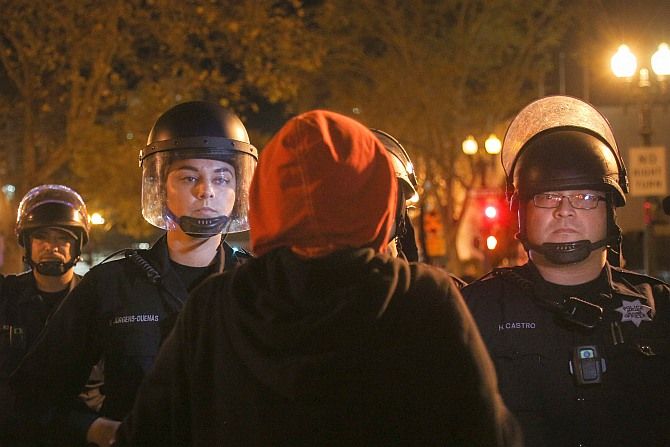 The New York Police Department bans the use of the chokehold, and Pantaleo’s attorney Stuart London said the officer used an approved take-down move, which he had learned in the police academy, because Garner was resisting arrest.

When asked if she would accept an apology from Pantaleo, Garner answered, "Hell no." 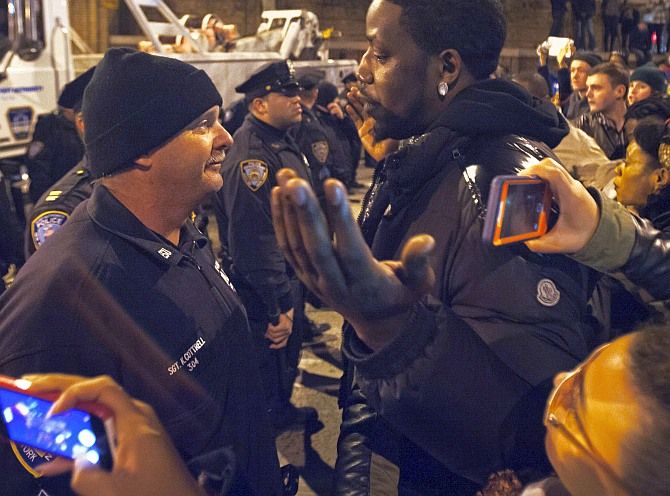 "I could care less about his condolences," Garner later said. "He's still working, he's still getting a paycheck, he's still feeding his kids. And my husband is 6 feet under, and I'm looking for a way to feed my kids now."

She later asked, "Who's gonna play Santa Claus for my grandkids this year?" 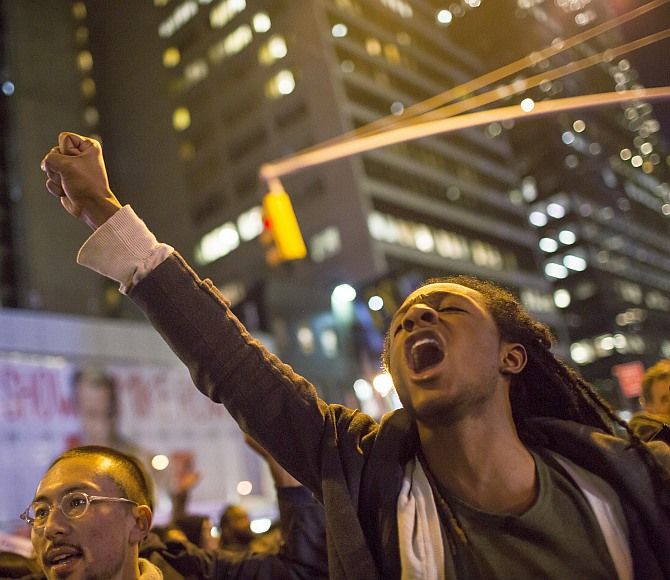 People take part in a protest against the grand jury decision on the death of Eric Garner in midtown Manhattan in New York. Photograph: Eric Thayer

In a televised address, Holder said the Justice Department would investigate whether Garner suffered any civil rights violations when he was placed in a chokehold by New York police department officer Daniel Pantaleo.

The attorney general acknowledged the deaths of 43-year-old Garner and 18-year-old Brown had tapped into wider concerns about policing. “This is not a New York issue, nor a Ferguson issue alone,” he said. 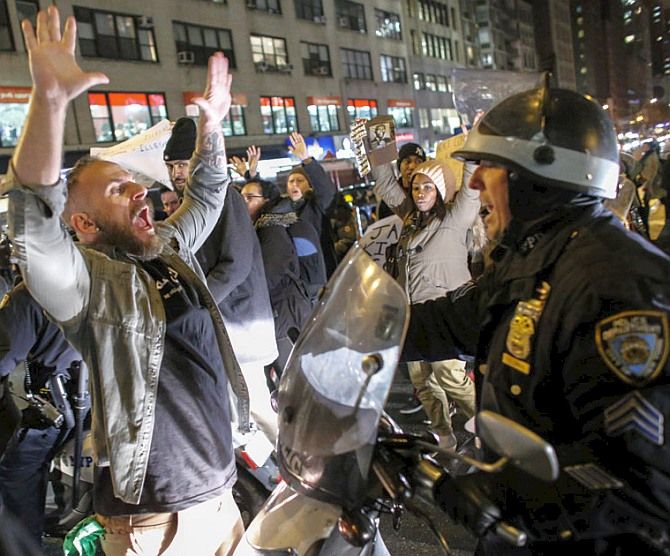 A man yells at a police officer as he takes part during a protest on 6th Avenue in Manhattan. Photograph: Kena Betancur/Getty Images

“We’ve all seen the video of Garner’s arrest,” Holder added. “His death is of course was a tragedy. All lives must be valued – all lives. Garner’s death is one of several recent incidents across our great country that have tested the sense of trust that must exist between law enforcement and the communities they are charged to serve and to protect.”

Holder said “substantial numbers of people” would want to protest against the decision not to indict the police officer. But he cautioned those demonstrating that “those most successful movements are those that adhere to the principles of nonviolence”. 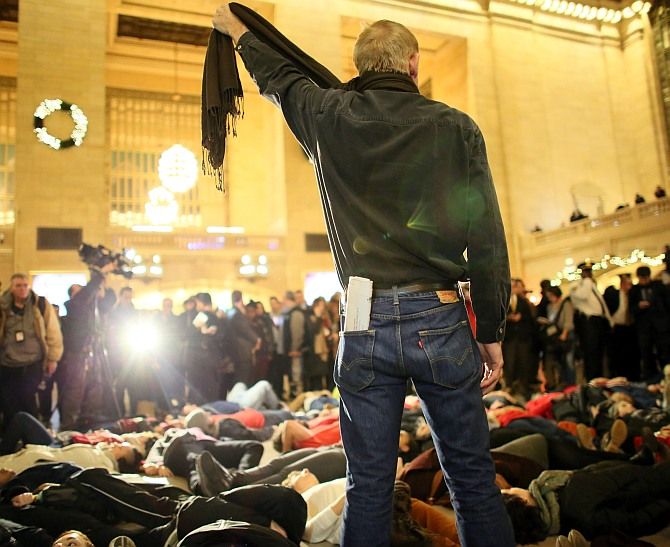 A man symbolically chokes himself with a scarf during a protest in Grand Central Terminal in New York. Photograph: Yana Paskova/Getty Images

“I urge all inclined to demonstrate tonight, and in the days ahead, to remain peaceful in their demonstrations and not to engage in activities that deflect our attention from the very serious matters that our nation must confront,” Holder said.

The United States has been confronted with a series of images of unarmed black men who have died after encounters with police: video of Garner grappling with officers on a sidewalk, pictures of Brown’s body lying in a street and surveillance footage of a black 12-year-old in Cleveland, Tamir Rice, who was fatally shot after a police officer mistook his BB gun for a firearm. 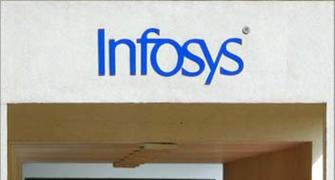 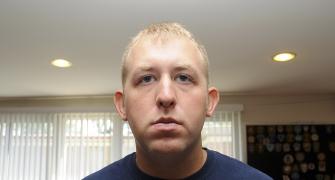 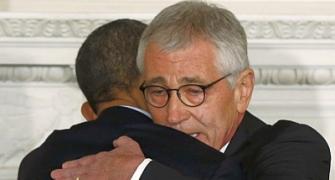 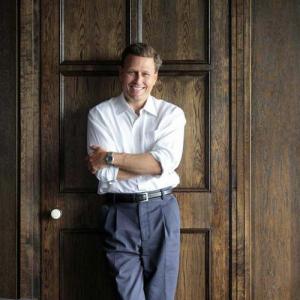 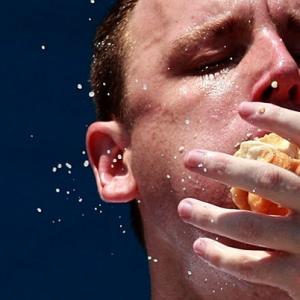