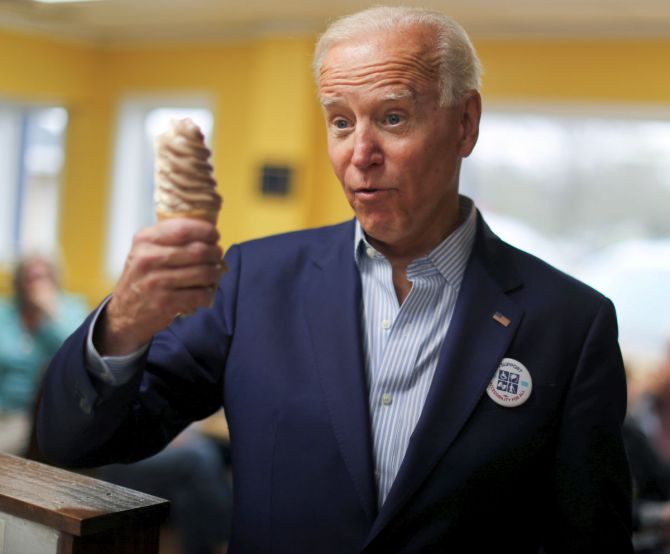 IMAGE: During a two-day campaign kickoff in Monticello, Iowa, Joe Biden quips that it's awkward to talk about foreign policy to reporters with an ice cream cone in his hand. Photograph: Jonathan Ernst/Reuters

Third time lucky is an apt phrase to describe the remarkable rise of Joseph Robinette Biden Jr, a veteran in US politics for around five decades, from being one of the youngest senators in history to the oldest American president-to-be.

The presidential dreams that the veteran leader from Delaware had harboured since childhood seemed all but over for a third time until he won South Carolina's Democratic Party primary on February 29, forcing most rivals out of the race and making one of the most dramatic comebacks in American political history. 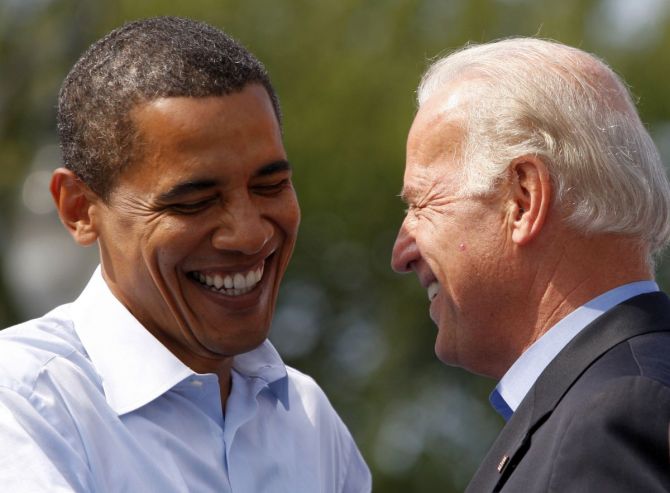 Biden, a familiar face to many Americans who has spent five decades in Washington and served two terms in the White House as former president Barack Obama's vice president, capitalised on that experience to portray himself as a tested leader and a better alternative to Republican incumbent President Donald Trump.

While accepting the Democratic presidential nomination in August, Biden pledged to restore the “soul of America”, and be an “ally of the light, not the darkness.”

“The current president has cloaked America in darkness for much too long. Too much anger. Too much fear. Too much division. If you entrust me with the presidency, I will draw on the best of us, not the worst. I will be an ally of the light, not of the darkness,” he had said. 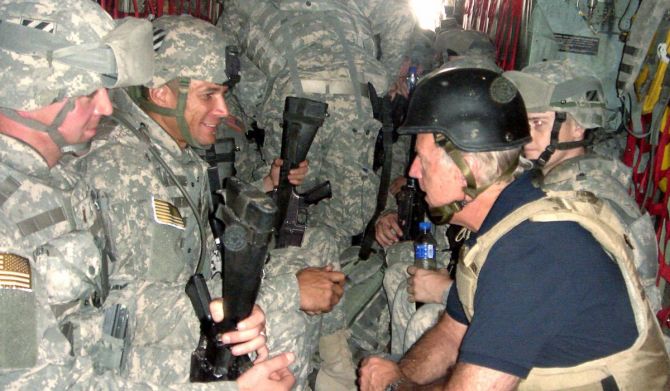 IMAGE: Joe Biden talks with soldiers as he travels in a military vehicle to Iraq from Kuwait in this September 6, 2007, photograph. Photograph: Reuters.

He has a strong track record of being an ardent advocate of a strong India-US relationship both as a Senator from Delaware for over three decades and then as deputy of President Obama for eight years.

Referring to his eight years as the vice president, Biden said that he was proud to have played a role in securing Congressional approval for the US-India Civil Nuclear Agreement, which he said was a "big deal".

"Helping open the door to great progress in our relationship and strengthening our strategic partnership with India was a high priority in the Obama-Biden administration and will be a high priority if I'm elected president," Biden had said. 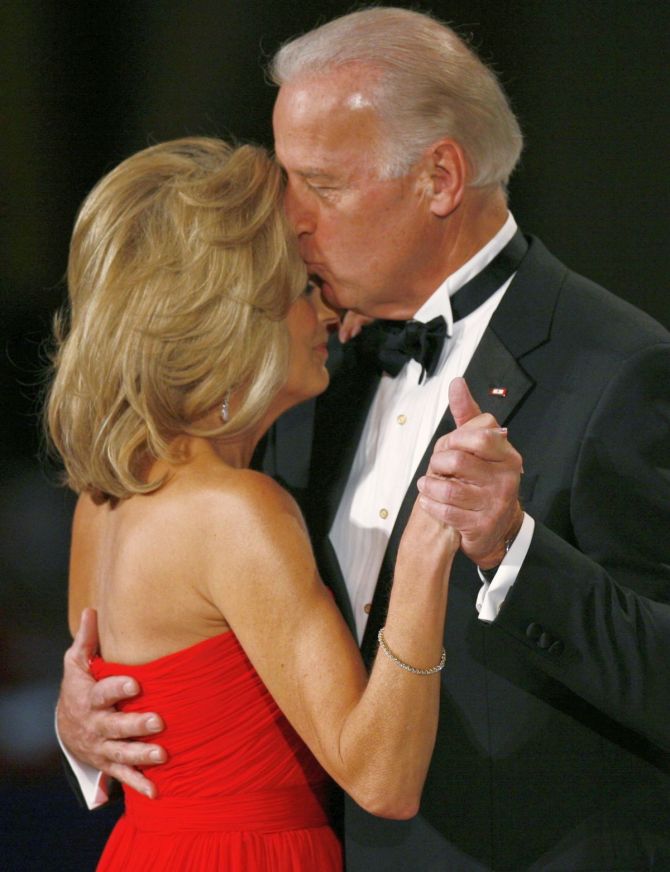 IMAGE: Joe Biden, then US vice president, kisses his wife Jill as they dance at the Commander-In-Chief Ball in Washington DC, January 20, 2009. Photograph: Gary Hershorn/Reuters.

Born in Pennsylvania in 1942 to a Catholic family, Joe Biden studied at the University of Delaware and then earned a law degree from Syracuse University in 1968.

He was first elected in 1972, and served six terms as a senator for the state of Delaware. 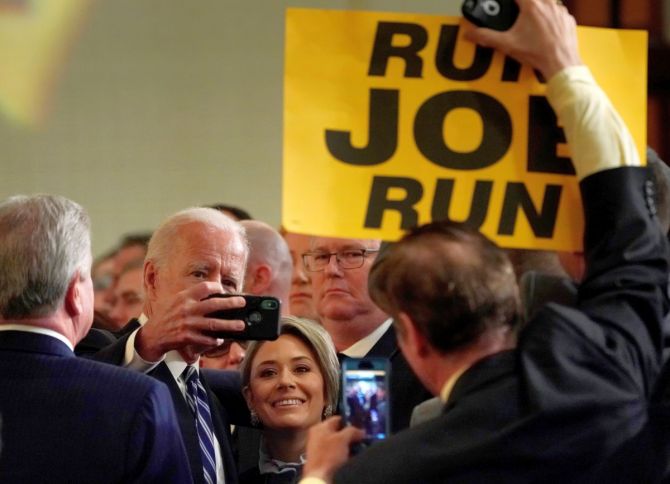 Biden himself had a health scare in 1988 when he suffered two brain aneurysms. He has referred to his personal losses on the campaign trail, and declared: “Healthcare is personal to me.”

In October, Biden pointed to his son's terminal diagnosis and said: “I can't fathom what would have happened if the insurance companies had the power to say ‘last few months, you're on your own’.”

Biden faced allegations from former staffer Tara Reade in 2019, who said she felt uncomfortable with Biden during her time in his Senate office in the 90s.

In March 2020, she also accused him of sexual assault in 1993. Biden and his campaign team have strongly denied the allegation. 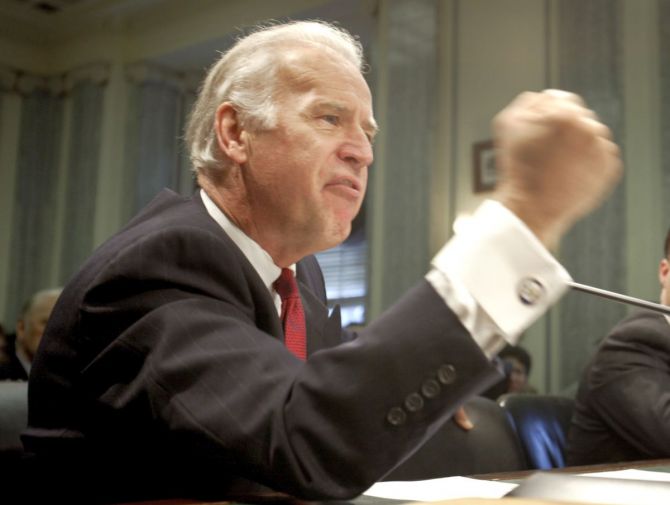 IMAGE: Joe Biden shakes his fist as he lashes out at steroid use in sports, during a hearing of the Senate Commerce, Science and Transportation Committee on Capitol Hill, March 10, 2004. Photograph: Kevin Lamarque/Reuters.

During his tenure, Biden voiced support for LGBT rights, calling himself “absolutely comfortable” with the idea of same-sex marriage.

Obama officially endorsed Biden in April. He has praised him, saying, "Biden is my brother. I love Joe Biden. And he will be a great president and he treats everyone with dignity and with respect". 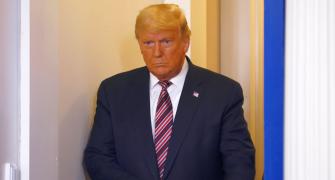 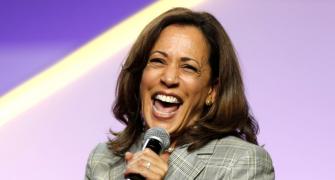