Nine Indian Army personnel and two civilians were injured when terrorists triggered an improvised explosive device fitted in a vehicle near an army patrol in the militancy-hit Pulwama district of south Kashmir Monday, officials said. They said the multi-vehicle patrol of the 44 Rashtriya Rifles was moving on Arihal-Pulwama road when the IED was detonated by the terrorists, injuring the personnel travelling in a bullet-and-mine-proof Casper vehicle.

The army personnel immediately swung into action and fired in air to dominate the situation and ward off any surprise attack, the officials said.

The injured have been admitted to a hospital and all of them were reported to be in stable condition, the officials said.

Srinagar-based defence spokesman Col Rajesh Kalia said it was a "failed attempt" to attack the patrol and except for a "few minor injuries, all troops are safe".

"A failed attempt was made to attack a mobile vehicle patrol of 44 RR with a vehicle-based IED while the army patrol was moving in the general area Arihal in district Pulwama today evening," he said in a statement here.

"Troops are all safe, (except a) few minor injuries," the defence spokesman said, adding the damage was minimised due to the alertness of the patrol team.

The area has been cordoned off and a search operation is in progress, he said.

The site of the blast is 27 kilometre from the area where a convoy of vehicles carrying security personnel on the Jammu-Srinagar National Highway was attacked by a suicide bomber on February 14 in which 40 Central Reserve Police Force personnel were killed. 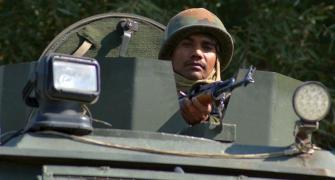