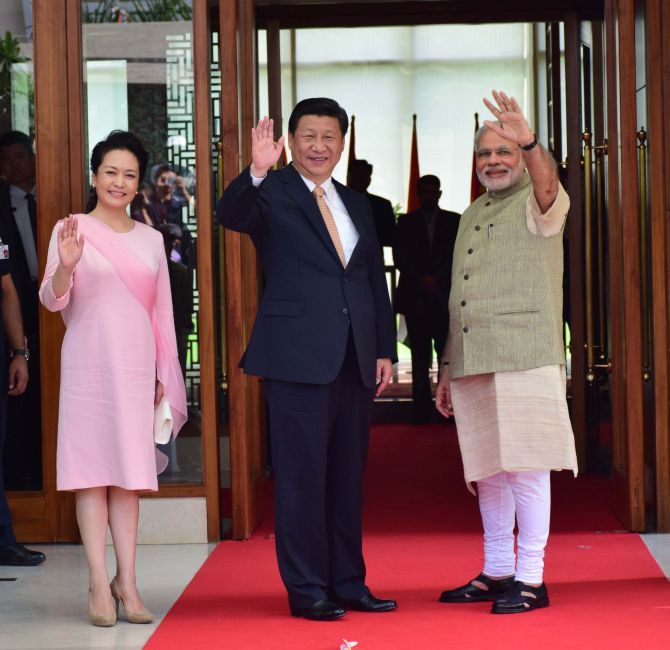 State authorities rolled out the red carpet as Xi, the first Chinese leader to visit Gujarat, was given a warm welcome after an Air China special aircraft carrying him and his delegation landed at the airport. Giant billboards in Mandarin, Gujarati and English were put up at various places in Ahmedabad to welcome him. 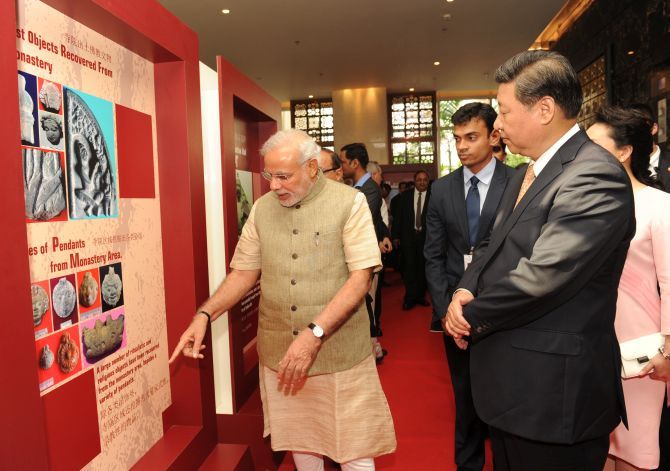 Modi takes Chinese President Xi Jinping on a virtual tour of Vadhnagar. Vadhnagar, which is where Modi was born, is where 7th century Chinese traveller Hiuen Tsang had visited during his 15-year stay in the country. Photograph: MEA/Flickr

Xi's three-day visit is aimed at ramping up trade and investments, besides having discussions on substantive issues including the contentious border dispute. It also coincides with Modi's 64th birthday.

The three pacts were signed in the presence of Modi and Xi after the Chinese leader and his wife Peng Liyuan, dressed in a pale pink knee-length dress, were welcomed by the PM at the entrance of the Hyatt Hotel. Modi gave floral bouquets to the couple.

The choice of Gujarat as Xi's first stop in India marks a departure from protocol and many see it as a sign of warm relations between the two leaders. When the couple landed at the Ahmedabad airport, apart from a guard of honour, there was a traditional Gujarati dance. The three pacts include making Guangzhou city in China and Ahmedabad as sister cities, setting up of industrial parks in this state and an agreement between Guangdong province and the Gujarat government for development of cultural and social ties between the two provinces, officials said.

The agreement, aimed at developing industrial parks, was signed between China Development Bank and Industrial Extension Bureau of the Gujarat government. It envisages promoting the bilateral trade and setting up of industrial parks in the state, especially for electronics and electrical goods.

While an agreement was signed between Guangdong province and Gujarat government for development of cultural and social ties between the two provinces, another MoU was inked between Guangzhou city and Ahmedabad, to make them sister cities.

These MoUs will facilitate exchange of ideas and services between Gujarat and China, officials said. 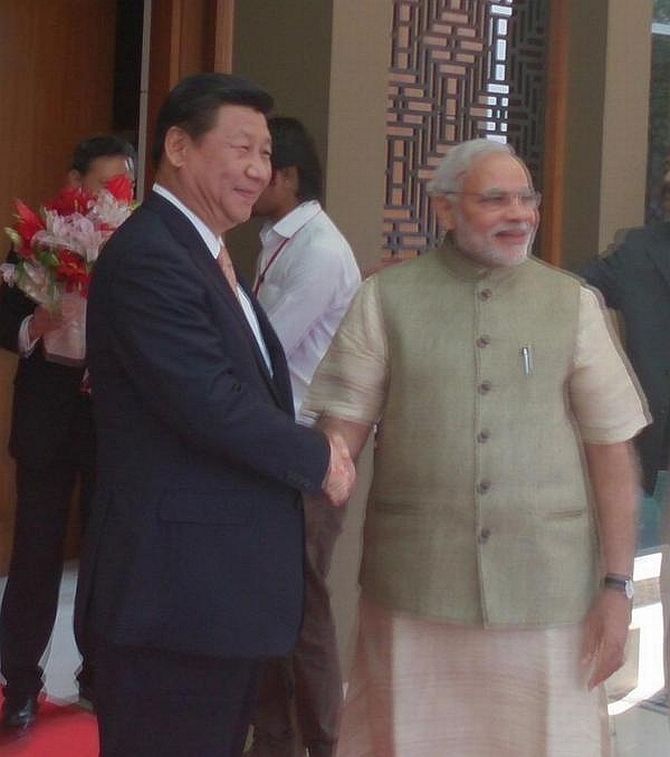 Modi and President Xi shake hands outside the hotel in Ahmedabad. Photograph: MEAIndia/Twitter

Besides Modi and Xi, Chief Minister Anandi Patel and her cabinet colleagues, members of Chinese delegation and several top businessmen from the state were present at the event.

Modi also accompanied Xi to the tranquil Sabarmati ashram on Ahmedabad's Ashram road and explained its historical significance to the Chinese leader.

They later took a walk down the Sabarmati riverfront, which was a riot of colour with the visiting dignitaries treated to a mix of Gujarati tradition and culture through dance forms including the famous garba dance. 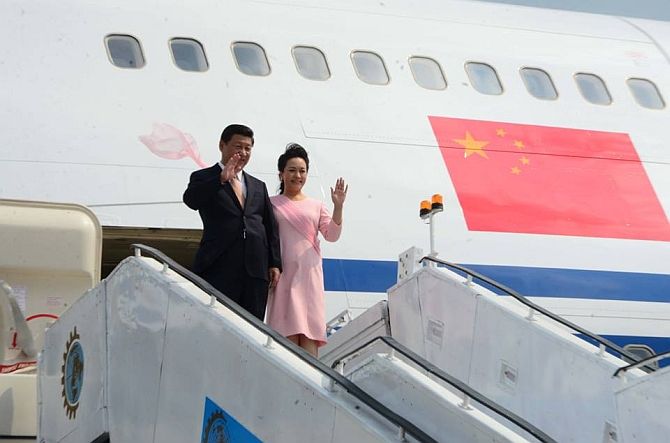 Xi's visit comes in the middle of a new stand-off in Demchok area of Ladakh with Chinese nomads now reported to have erected tents there with the help of Chinese troops inside the Indian territory to protest against an ongoing irrigation canal work.

Modi and Xi, who had a brief one-on-one meeting, will hold extensive talks in Delhi on Thursday following which the two sides are expected to sign a number of pacts which will provide for Chinese investments in a range of areas including railways and industrial parks.

Largely described as a visit to focus on economic and trade issues, Xi is expected to announce large scale Chinese investments in railways, manufacturing as well as infrastructure rivaling Japan's $35 billion commitment made during Modi's recent visit to Tokyo.

Chinese officials say that China would be committing anywhere between $100 billion to $300 billion in the modernisation of Indian railways, establishing of industrial parks as well as investment in mega infrastructure projects.

China's foreign exchange reserves, the largest in the world, reached a record $3.95 trillion in March and it plans to invest around $500 billion overseas in the next five years, a large share of which is expected to find India's way. 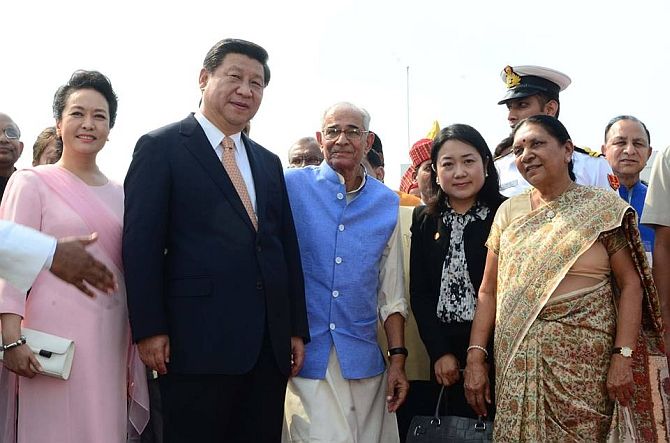 Xi is accompanied among others by State Councillor Yang Jiechi, who was earlier foreign minister, Foreign Minister Wang Yi, Commerce Minister Gao Hucheng besides a number of businessmen and other leaders.

Ahead of Xi's arrival, India said it expects that the visit will address the "interests and concerns" of the two countries and that "all substantive" issues having bearing on the ties including the boundary dispute will be discussed.

Sixty-year-old Xi, who took over as the head of the ruling Communist Party in 2012 and president and military chief in March last year, had been sending clear signals of boosting bilateral relations with India.

Modi said the relationship between the two countries goes beyond "plain arithmetic" and he was confident that the neighbours can "script history" by enhancing cooperation.

Reflecting the importance India attaches to the visit, Modi said India and China have a "unique chemistry" that can make for a defining moment and create a bright future for the entire mankind.

Xi's visit will be the third by any Chinese president to India. President Hu Jintao had visited India in 2006 and Jiang Zemin had come here in 1996. 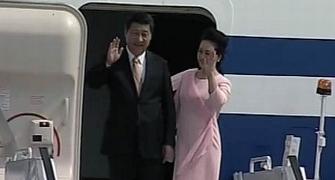 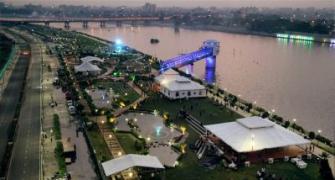 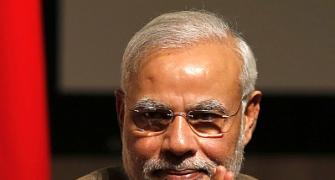 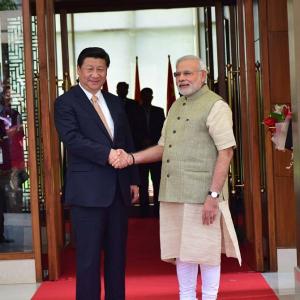 The foursome who were tasked with Gujarat's welcome for Xi 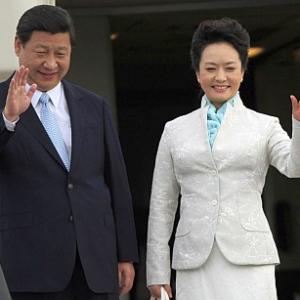