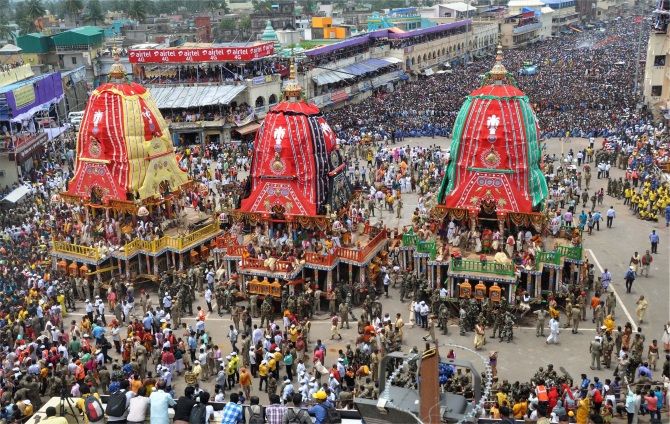 IMAGE: Devotees around the chariots of Lord Jagannath, Balabhadra and Devi Subhadra during the Lord Jagannath Rath Yatra in Puri. All photographs: PTI

An estimated 9 lakh devotees witnessed the world famous 'Ratha Yatra' of Lord Jagannath on Wednesday with religious fervour, enthusiasm and a spirit of camaraderie amid tight security.

Lakhs of devotees from across the globe descended on the pilgrim town to witness commencement of the nine-day journey of Lord Jagannath, Lord Balabhadra and Devi Subhadra to GundichaTemple and back to their abode.

Devotees from all walks of life made a beeline to the town since Tuesday for the world famous annual festival of chariots to catch a glimpse of the presiding deities of the 12th century shrine of Sri Jagannath. 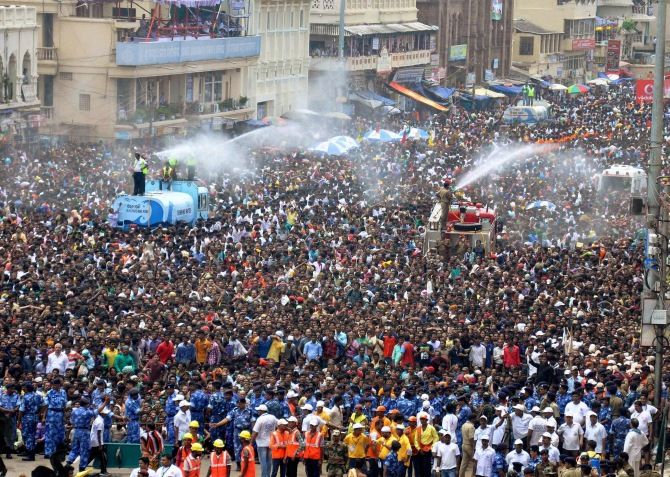 IMAGE: Water being sprayed on the devotees thronged at the Lord Jagannath Rath Yatra in Puri.

Enthusiasm and excitement ran high among the devotees as the deities remained indoors since "Snana Purnima" which was held on June 20. 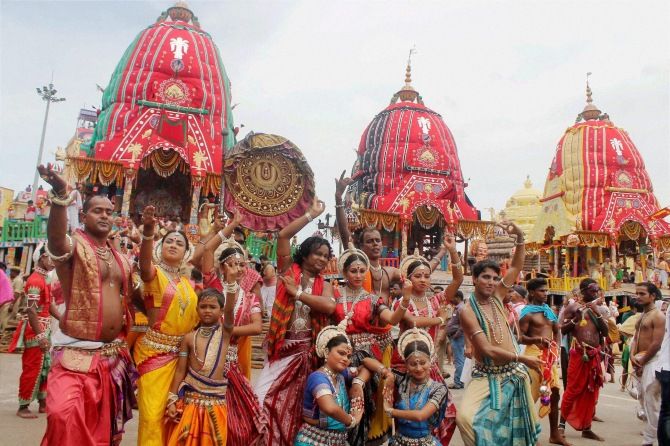 IMAGE: Traditional dancers in different costumes perform at Dhadhi Pahandi in front of the chariots of Lord Jagannath, Balabhadra and Devi Subhadra during the Lord Jagannath Rath Yatra in Puri.

'Naba Jaubana Darshan' of deities was held on Tuesday as they remained confined in "Anasara Pindi" (recovery chamber) after the grand bath or 'Snana Purnima' on June 20.

With a large number of visitors thronging the holy town on the occasion, police made elaborate arrangements to throw a thick security blanket by deploying personnel in strength besides putting air and coast surveillance in place.

A multi-layer security net had been thrown to ensure smooth conduct of the festival while CCTVs have been installed at various locations to keep a tab on people, Director General of Police, K B Singh said. 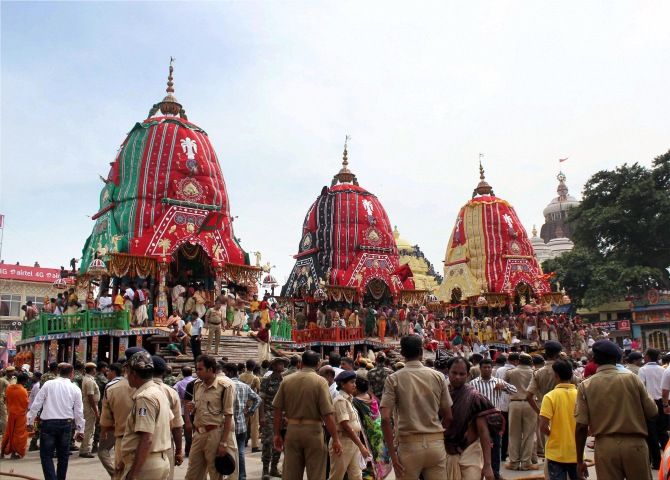 Security was tightened outside the temple, around the three chariots, the Grand Road, sea beach, railway station and bus stand, he said adding patrolling was strengthened.

Steps were also taken to avoid any stampede-like situation.

Personnel of Anti-Terrorist Squad, Rapid Action Force and sharp-shooters were deployed in vital points while the Coast Guard kept a vigil on the sea.

Devotees poured into the seaside town to watch the grand ceremony and pull the three majestic and colourful chariots on the 'Bada Danda', the grand avenue.

Before the presiding deities -- Lord Jagannath, his elder brother Lord Balabhadra and their sister Devi Subhadra -- set out from the sanctum sanctorum of the temple, a number of special rituals such as 'Mangala Arati' and 'Mailam' were held.

Descending from the 'Ratna Sinhasana', the bejeweled throne, the three deities were taken out of the temple down the 22 steps known as 'Baisi Pahacha' through the Lion's Gate in an elaborate royal ritual called 'Pahandi' as devotees and sevayats jostled to have a glimpse and touch them.

In a rhythmic style, the deities moved forward step by step to the accompaniment of beating of ghantas and kahalis and blowing of konch shells.

The trinity proceeded majestically in rhythmic movement in their journey to the world outside during Pahandi. At first Sudarshana, the celestial wheel of Krishna-Vishnu, was taken out and placed in the chariot of Subhadra follwed by Balabhadra, Subhadra and finally Jagannath.

Ready to carry the deities for their annual nine-day sojourn to the Gundicha temple, about 2.5 km away, the three majestic wooden chariots waited outside draped in layers of red, black, green and yellow cloth.

The 45-feet high 'Nandighosh', the chariot of Lord Jagannath stood with 16 huge wooden wheels, while the 44-feet high 'Taladhawaja' with 14 wheels is famous as Balabhadra's and Subhadra's 'Darpadalan' Is 43-feet high with 12 wheels.

Shankaracharya of Puri Govardhana Peeth, Swamy Nischalananda Saraswati had 'darshan' of the deities on chariots along with his six disciples.

Thereafter, the Gajapati King of Puri Divyasingh Dev proceeded to the chariots to perform the 'Chhera Panhara' ritual by sweeping the platform with golden broom before the pulling of the Raths.