Bharatiya Janata Party candidate Bharati Ghosh was attacked in West Bengal and a poll officer was allegedly beaten up by an MLA of the saffron party in Uttar Pradesh during the Lok Sabha poll’s sixth and penultimate phase on Sunday in which over 63 per cent turnout was recorded in 59 seats across six states and the national capital. 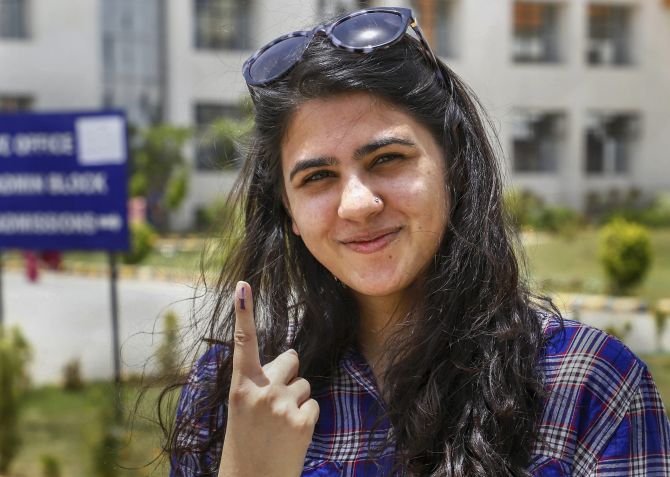 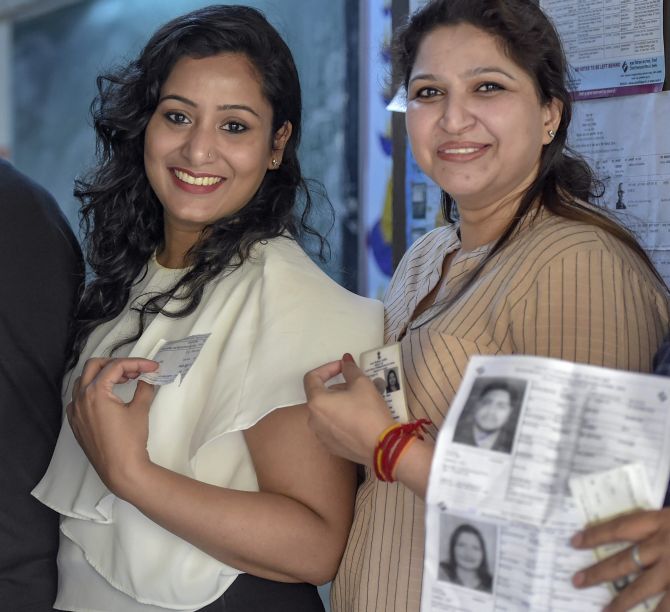 With Sunday’s polling, votes have already been cast in nearly 89 per cent of the 543 constituencies, while the last phase of voting will take place on May 19 for the remaining 59 seats.

The Election Commission announced 63.3 per cent turnout across the states and Delhi, with West Bengal recording over 80 per cent polling and the national capital registering just 60 per cent. 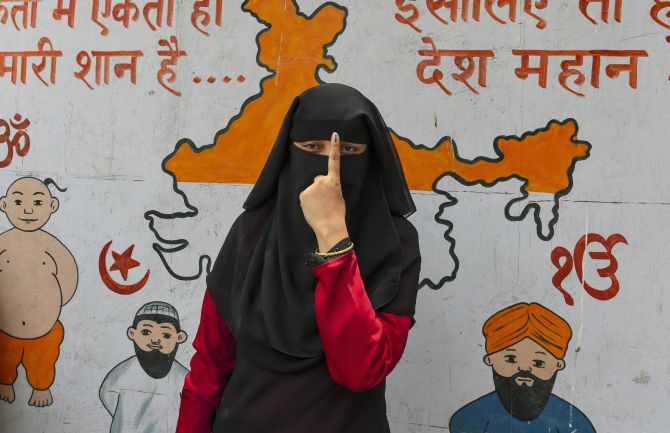 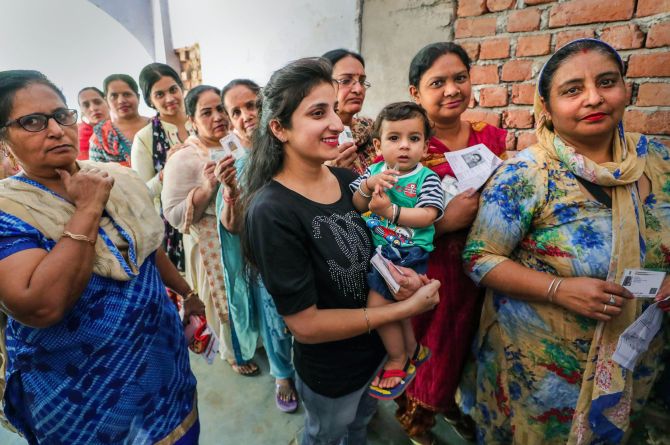 Delhi's saw a dip in its turnout from 65 per cent in 2014, despite a three-cornered contest between the BJP, Congress and Aam Aadmi Party with several high profile candidates, while the EC also appeared disappointed at the low polling figure even after its enhanced efforts to draw the voters to polling booths. 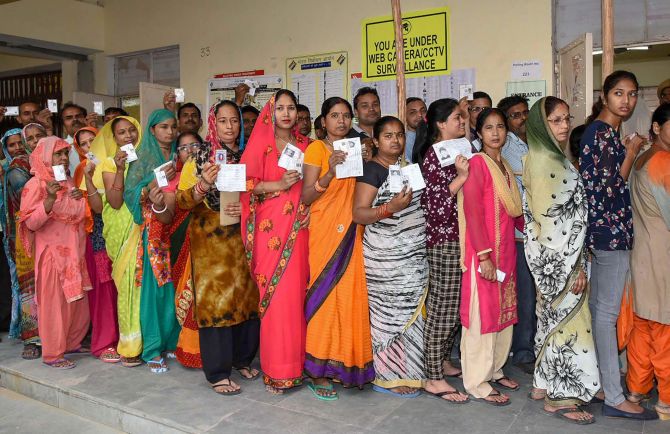 Over 80 per cent polling was recorded in eight seats in West Bengal, where BJP's Ghatal candidate and former IPS officer Bharati Ghosh was attacked twice by local people when she tried to visit polling stations in her constituency.

Ghosh suffered minor injuries when a group of women allegedly attacked her when she tried to take a BJP agent inside a polling booth at Keshpur area, officials said. 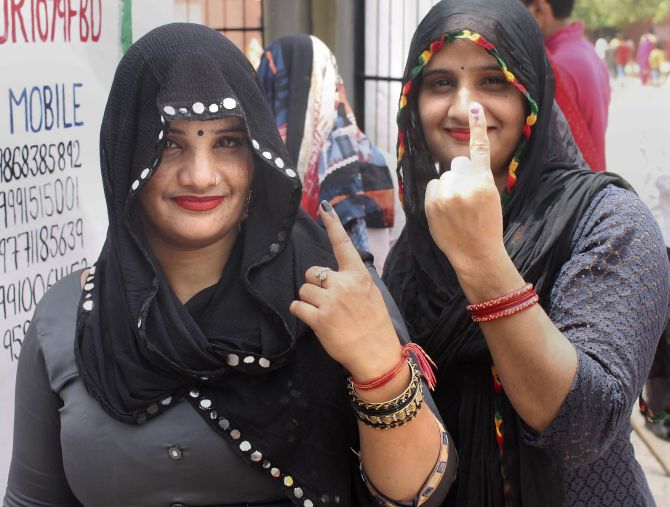 Following this, bombs were hurled and stones were pelted towards her convoy when she was going to visit another booth at Dogachia in Keshpur after receiving complaints of rigging there.

One of her security guards was injured and a vehicle was damaged, they said. 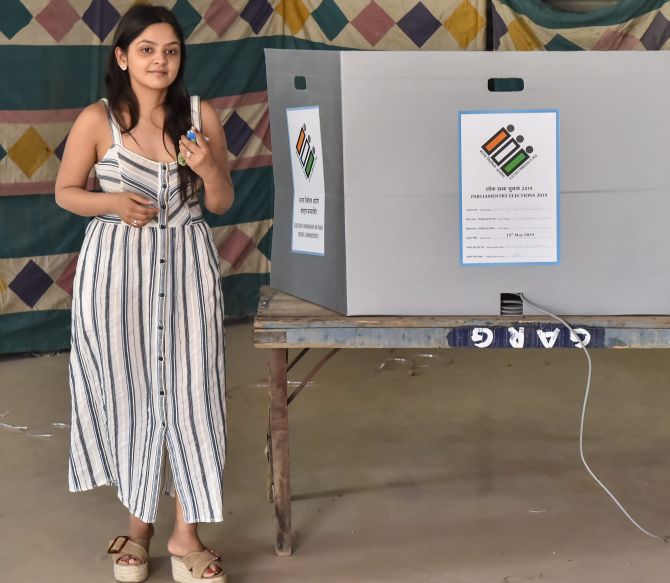 In the politically crucial state of Uttar Pradesh, 54 per cent polling was reported in 14 constituencies. SP president Akhilesh Yadav and Maneka Gandhi are in the fray in the state that sends 80 members to Lok Sabha.

Maneka Gandhi and her rival Bahujan Samaj Party candidate Chandra Bhadra Singh had a face-off in Sultanpur, with the BJP leader warning him that hooliganism will not work. Singh dismissed her charge. In Badohi, BJP MLA Dinanath Bhaskar and four others allegedly beat up a presiding officer in the Aurai assembly segment, accusing the official of deliberately slowing the polling process.Poll officials have sought a report on the matter.

In Azamgarh, Akhilesh is trying to retain his father and Samajwadi Party founder Mulayam Singh Yadav's seat against Bhojpuri film star 'Nirahua' of the BJP. 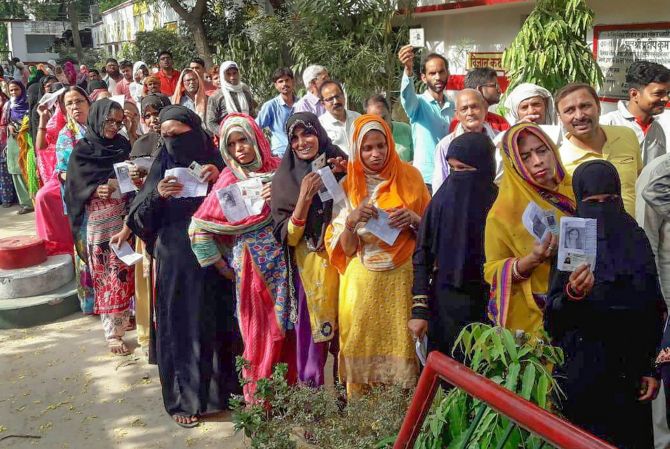 A few incidents of malfunctioning of EVMs were reported from various booths, officials said.

In Bihar, around 59.38 per cent turnout was recorded for the eight Lok Sabha seats. 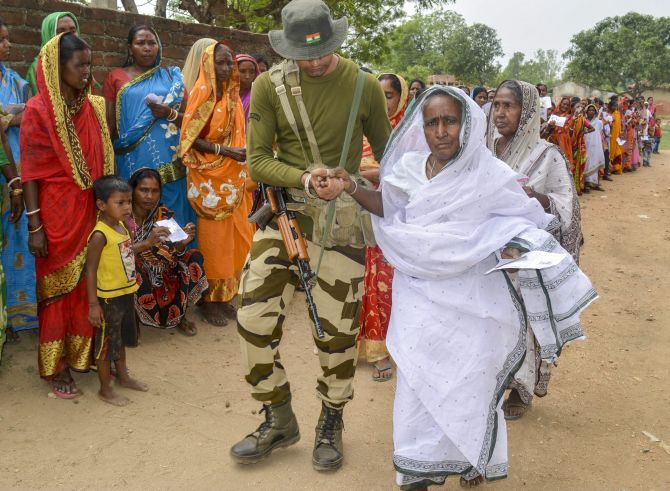 In Sheohar Lok Sabha constituency, a polling officer was killed at a booth in a freak incident of firing by a home guard before polling started.

Haryana recorded around 66.30 per cent turnout in 10 Lok Sabha seats and officials said no untoward incident was reported and polling remained peaceful in the state. Grover, however, rejected the charge claiming that Deepender, who is the son of former CM Bhupinder Singh Hooda, made baseless allegations in the face of 'imminent defeat'.

In Jharkhand, an estimated 64.46 per cent turnout was recorded for four Lok Sabha seat and officials said no untoward incident was reported. 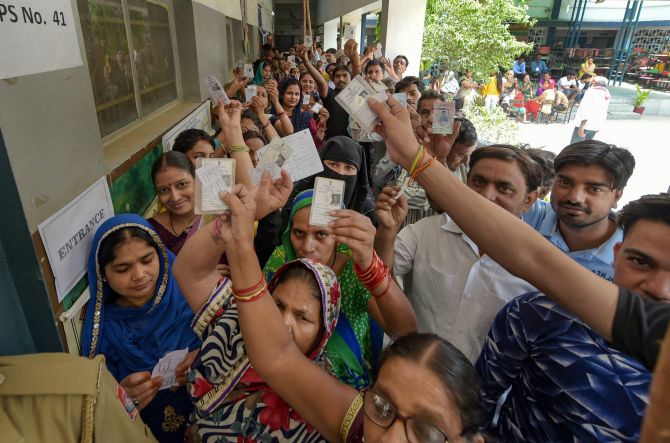 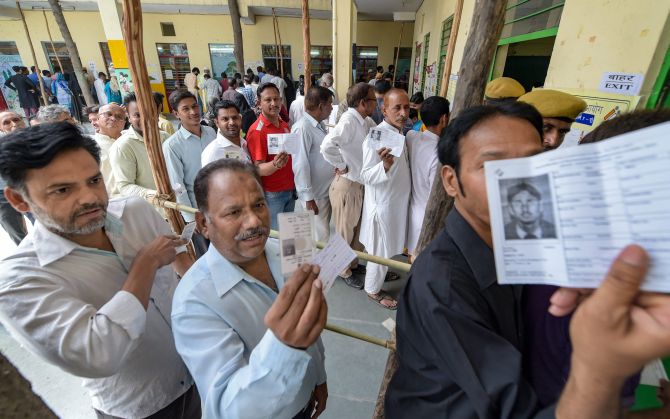 Congress general secretary Jyotiraditya Scindia, who is seeking re-election from Guna seat, is locked in a battle with BJP's K P Yadav, who is contesting his first general election. 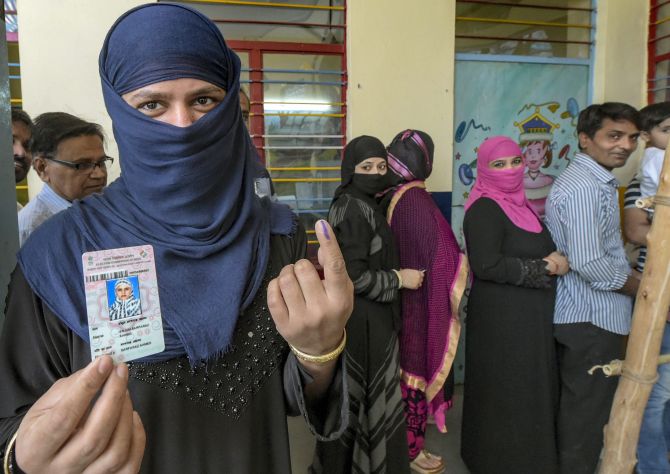 Former chief minister Shivraj Singh Chouhan and his family members exercised their franchise at their native village Jait, which falls under the Vidisha Lok Sabha seat.

Union minister Narendra Singh Tomar, who is the sitting MP from Gwalior, is in the fray from the Morena seat this time. 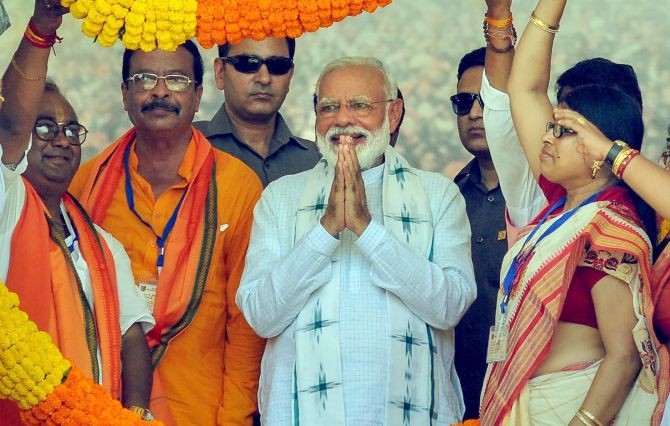