'Motherf*&^%$', 'Frank Sinatra's dead baby', 'If you don't like the music tonight, please don't keep it to yourself. Tell the DJ'.

Stuff you normally associate with a rowdy pub and not a fashion show. But then India Fashion Week is known to set trends and such profane lyrics-laden songs redefine the term attention grabbing.

Or let's put it this way -- everyone's playing a let's-see-how-better-I-can-shock game. 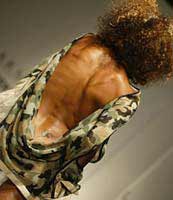 An Aki Narula show spells sexual energy. The designer has always delighted in expression -- in song (through his shows) and on fabric.

This is how a typical scene at an Aki show plays out. The designer usually stands with the choreographer (at IFW, it was Asha and Vidyun Singh) and watches his models take the ramp. Arms waving, fists pumping, dancing to the beat, the designer eggs his models on to 'express' more. That's perhaps why, at the end of his showing, he had four models lock themselves in an intimate clinch.

Snippet: Most Wearable Collection on Day 1 of IFW: Cue, by Rohit Gandhi and Rahul Khanna

If there's one thing - besides clothes of course - you can see at designer Rocky S' show, it's filmstars. 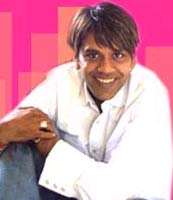 They flock to his shows like bees to honey. For those of you who didn't know, the designer has been wardrobe consultant for many stars, including Hrithik Roshan, Preity Zinta, Diya Mirza. They also usually form a clique and cheer lustily from their seats at Rocky's shows.

This year, curiously, there was none of that buzz. The only film industry presence was Diya Mirza and Suman Ranganathan. While Diya wore a flowing turquoise blue short kurta with trousers, Suman looked tight in white.

Meanwhile, Rocky S is also wardrobe designer for Hrithik and Preity's Koi...Mil Gaya as also Rudraksh, which stars the sensuous Bipasha Basu and musclemen Suniel Shetty and Sanjay Dutt. His Bollywood aspirations now extend to creating the look for entire films, not just the lead actors.

What they wore:
Rocky S: a mauve chikan-worked shirt with white pants

Aki Narula: Netted olive vest over a white vest, topped with an orange and white jacket