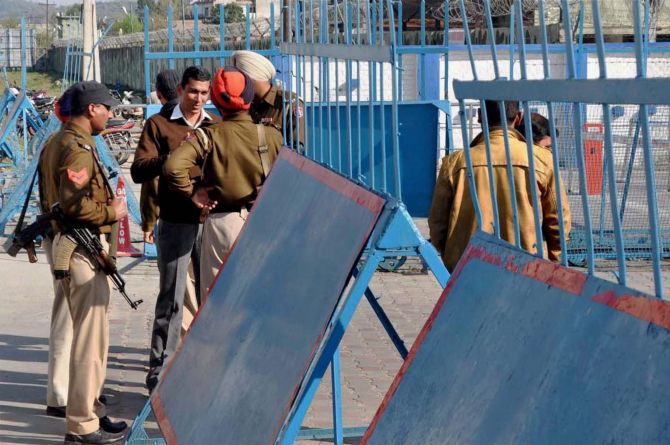 The airbase station in Pathankot, which had witnessed a terror attack last year, was put on high alert on Tuesday and a massive search operation was initiated in the area following intelligence input about presence of suspicious men.

The joint operation of Punjab Police, the Army, the Air Force and the Himachal Pradesh Police was launched following the intelligence input, Pathankot Senior Superintendent of Police Nilambari Vijayjagdale said.

Without divulging much information, she said the search operation is part of precautionary measures and more than 500 security personnel are engaged in it.

The SSP said the operation is being carried out in villages and other areas located near the airbase station and air surveillance is also being conducted using helicopters.

Besides patrolling by security personnel, Quick Response Teams have also been deployed to check any suspicious activity, police said.

Last year, terrorists had sneaked in from across the border and attacked the air base on the intervening night of January 1-2 while Dinanagar in Gurdaspur was targeted on July 27 in 2015.

The Pathankot attack had claimed the lives of seven security personnel while four terrorists were killed.

In the Dinanagar attack, three heavily-armed terrorists wearing army fatigues had stormed a police station, killing seven persons, including a Superintendent of Police, before they were gunned down during a day-long operation.

IMAGE: Security deployment around the Indian Air Force base in Pathankot on Tuesday following an intelligence input about a possible terror attack. Photograph: PTI Photo