Paramilitary forces waiting on govt to decide on OROP-like demand 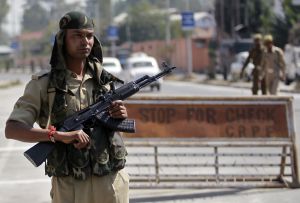 With the One Rank One Pension scheme for military veterans set to be notified soon, officials of central paramilitary forces, too, may be in for good news soon as the government is to take a final decision on granting of "organised services" status to them.

Through grant of such status, as ordered by Delhi high court in September this year, the officials of forces like the Central Reserve Police Force, the Border Security Force, the Indo-Tibetan Border Police, the Central Industrial Security Force and the Sashastra Seema Bal will get faster promotions, hike in emoluments and other service-related benefits from a period dating back to 2006.

In a significant order by a division bench of Justices Kailash Gambhir and Najmi Waziri on September 3, Delhi high court had asked the Centre to consider these forces as "organised services" and ensure non-functional financial upgradation from 2006 in terms of the 6th Pay Commission.

"The home ministry, the cadre-controlling authority of these officers, will soon take a final call in this regard as the court had given it eight weeks' time to issue orders. That deadline will expire in the first week of November," sources in the security establishment said.

They said the chiefs of these forces have also submitted their respective reports in this regard to the home ministry and have indicated that such upgradation should be granted to these personnel.

"Some officials of these forces, retired and serving, have also met Home Minister Rajnath Singh in this regard recently. He has assured them that the government will come out with its final decision soon," they said.

Sources added that the government may take the final call on the issue post the declaration of Bihar poll results on November 8 as the model code of conduct is in place till then.

Defence Minister Manohar Parrikar had on Monday said that the notification for the implementation of the OROP scheme for military veterans will be made "within days" of the Bihar poll process coming to an end.

"The government also has the option of filing a Special Leave Petition in Supreme Court for challenging the Delhi HC order. But the forces have requested the ministry not to take this step and instead implement the HC order, as that would be a morale booster," they said.

A section of the officers in these forces has also written to their directors general urging that this upgradation scheme be implemented in the right earnest.

In case it is not implemented or the Delhi high court order is challenged in Supreme Court, it would lead to widespread "demoralisation" amongst these officer cadres, they added.

"Please do the possible within your capability and by approaching the authorities concerned to ensure speedy and timely career progression of each rank to implement the verdict given by the Delhi high court on September 3, 2015 without further delay," a Second-in-Command officer of a border guarding force wrote to his DG recently.

NFU is a concept introduced in the pay commission and was granted to what the government termed 'Group A organised services'.

Under NFU, if all the officers of a particular batch cannot move up the ladder owing to lack of vacancies but only one does, the others will automatically get financial upgradation like the one who has got promoted. However, it would involve only a financial upgrade but not rank or perks.

The order was issued by the bench which was hearing pleas filed by over 200 serving and retired officers of the paramilitary forces seeking the court's direction for grant of NFU to them, alleging that deprivation of the financial benefit was "affecting the morale and efficiency of the officer."

"There is acute stagnation in the cadre of Group A officers of CRPF and this is affecting the morale and efficiency of the officers dedicating their life to the service of the nation at various sensitive areas in the performance of most-important duties of internal security of the country, that too when they are subjected to inhuman living conditions and in the absence of even basic facilities away from their families," the petition had stated.

The officers had also said that "undertaking these policy measures will ensure pay parity and social recognition as they would get timely promotions".

These forces form the country's largest paramilitaries, which not only guard strategic Indian frontiers but are also deployed for a variety of internal security duties.

In the plea, the petitioners had said that "while the department of personnel and training had issued notification providing for grant of non-functional pay upgradation, the government is yet to accord the benefit to group 'A' officers of the paramilitary".

According to the 6th Pay Commission recommendations, grade pay decides the status of an officer and denial of non- functional financial upgradation was "highly discriminatory", the officers had claimed.