Pakistani troops on Thursday opened fire and launched Rocket Propelled Grenades targeting Indian posts in Poonch district of Jammu and Kashmir. This is the third ceasefire violation by forces of the neighbouring nation in four days.

Pakistani troops opened fire and also launched RPGs on Indian posts in the Durga forward area along the Line of Control in Poonch district around 12.45 am, a senior army officer said.

Indian troops retaliated, which led to an exchange of fire that continued till 1.30 am, he said.

There was no loss of life or injury to anyone in the firing from the Pakistani side, he said.

At around 2 am, army authorities established a hotline contact and lodged a strong protest with the Pakistani army over firing and the ceasefire violation, the officer said.

Pakistan troops fired from two of their forward posts of Jemeela, along the LoC, on the Indian posts.

This is the third ceasefire violation along the Indo-Pak border in Jammu and Kashmir in the last four days.

Pakistani troops had violated ceasefire and opened fire on the forward belt of Keri area in Rajouri sector on Monday, resulting in injury to one army jawan.

On August 15, Pakistani troops violated ceasefire by firing on the Ballard Indian post in Samba district. 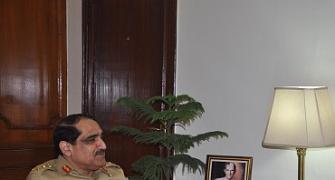