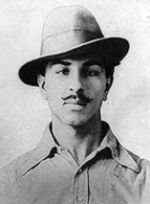 A Pakistani government committee has endorsed the renaming of a roundabout in Lahore after freedom fighter Bhagat Singh despite stiff opposition from extremist groups like the Jamaat-ud-Dawah.

About two weeks ago, the City District Government of Lahore had put on hold a move to rename Shadman Chowk after Bhagat Singh due to objections from hardline groups like the JuD and Jamaat-e-Islami and a section of local residents.

The matter was then referred to Dilkash Lahore, a committee set up to revitalise and beautify Lahore and to finalise new names for squares, roads and intersections after assessing their historical significant before the creation of Pakistan.

The committee finally rejected all objections and asked the authorities to notify Bhagat Singh Chowk as the new name of the roundabout without any further delay, officials told PTI.

JuD leaders and traders from Shadman Market, located near the roundabout, protested against the government's decision on Thursday.

Senior JuD leader Amir Hamza and Zahid Butt, the president of the local traders' body, announced that they would refer to the roundabout as Hurmat-e-Rasool Chowk.

They said they would resist efforts to rename the roundabout as Bhagat Singh Chowk tooth and nail.

Members of the Dilkash Lahore committee, while discussing the renaming of Shadman Chowk after Bhagat Singh, highlighted the importance of the place where the freedom fighter was hanged by the British.

Bhagat Singh was hanged in March 1931 in the erstwhile Lahore Jail, which stood at the spot where the roundabout was built later.

"(Pakistan's founder Muhammad Ali Jinnah) too appreciated Bhagat Singh in his speech on September 13, 1947," said noted television anchor Iftikhar Ahmad, who is a member of the committee.

The committee further recommended that an underpass on the Lahore Canal should be renamed after Jogindar Lal Mandal.

The City District Government of Lahore had first announced in the last week of September that the roundabout would be renamed after Bhagat Singh on the occasion of his death anniversary.

The move was put on hold after the JuD sent a strongly worded letter to district administration chief Noorul Amin Mengal and other government officials, warning them not to rename the spot after a "Hindu freedom fighter".

JuD leader Amir Hamza said: "We will not allow the renaming of places after Hindus, Sikhs or Christians. Pakistan is a Muslim country and such ideas cannot be appreciated".

However, retired Supreme Court judge Khalil-ur-Rehman Ramday, a member of the Dilkash Lahore committee, said Islam and the Constitution of Pakistan had always respected and protected the rights of minorities, including Sikhs, Hindus and Christians.

"That is why we are considering various important personalities, whether Muslims or Sikhs, Hindus and Christians, while renaming different places, intersections and underpasses in Lahore," Ramday said.
M Zulqernain in Lahore
Source: PTI© Copyright 2021 PTI. All rights reserved. Republication or redistribution of PTI content, including by framing or similar means, is expressly prohibited without the prior written consent.
Related News: Dilkash Lahore, Lahore Canal, Amir Hamza, Pakistan, PTI
SHARE THIS STORY
Print this article