Pak okays draft pact with US on NATO supply routes

Source: PTI
July 26, 2012 14:52 IST
The Pakistan government has approved a draft agreement with the United States on transportation of supplies to foreign forces in Afghanistan, weeks after it ended a seven-month blockade of the crucial routes.

The draft agreement was approved by the federal cabinet during a meeting chaired on Wednesday by Pakistan Prime Minister Raja Pervez Ashraf. However, the government is keeping the draft secret and details about it were not divulged to the media at a briefing held after the cabinet meeting.

Sources said that once the agreement is inked, legal hurdles in the way of the North Atlantic Treaty Organisation supplies would be removed.

Information Minister Qamar Zaman Kaira told the media that details of the agreement will be shared with the media after it is signed.

"The cabinet approved the Memorandum of Understanding between the Islamic Republic of Pakistan and United States of America for the transit of US cargo to and from Afghanistan through the territory of Pakistan," said a statement issued after the cabinet meeting.

Pakistan had shut the supply lines after a cross-border NATO air strike killed 24 of its soldiers last November. The routes were recently reopened after the US apologised for the incident.

The defence ministries of Pakistan and the US will be the lead agencies under the new cargo transit agreement to be signed soon, the Dawn newspaper quoted its sources as saying. The pact will replace the current arrangement governing NATO supplies.

The new agreement will be similar to the current mechanism and will cover the transit of US cargo from the time it takes effect till 2014.

Other countries in the International Security Assistance Force in Afghanistan that are interested in forging similar arrangements will have to accede to the Pakistan-US MoU, the report said.

The major difference between the existing and the new agreements is that the former was reportedly a verbal pact while the latter is written down.

One salient feature of the MoU is the introduction of a Central Coordination Authority to oversee its implementation. Pakistan's defence ministry will be the CCA with the defence secretary acting as the chief liaison officer.

During negotiations with the US, Pakistan tried to introduce provisions for demurrages and charges for special services but had to drop them because of the US reluctance to pay any fee.

The MoU approved by the cabinet has a "negative list" attached to it. This list includes lethal equipment, which Parliament has barred from being transported through Pakistani territory.

To ensure compliance with the negative list, the MoU has a provision for scanning all cargo.

Under new guidelines framed by Parliament, the defence minister will have to make a formal statement about the pact in the Senate and National Assembly before it is signed. 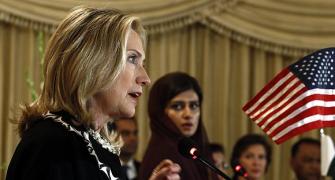 Will 'face-saver' politics of US, Pak WORK?