The role of Pakistan's intelligence outfit, Inter-Services Intelligence in the recent train disaster in Kanpur is being suspected after Bihar police on Tuesday arrested three people who they claimed were working for the agency to target Indian railways. 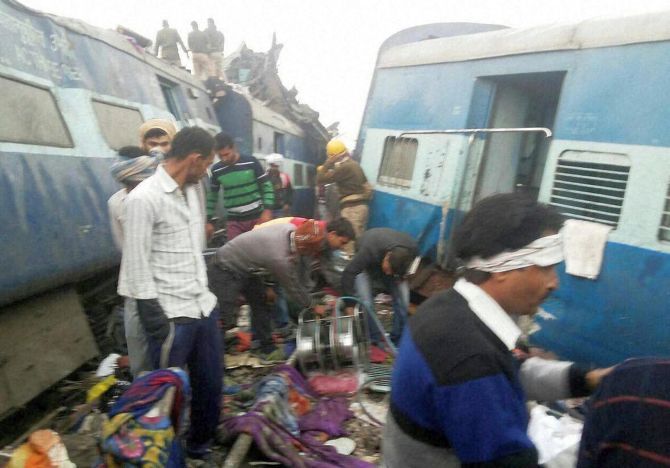 He said ATS and central agencies have been apprised of it for comprehensive investigation.

Moti Paswan, Uma Shankar Patel and Mukesh Yadav were arrested from Adapur police station area and they allegedly confessed to having worked for a Nepalese contact suspected to be connected to ISI to target the railways, Rana told reporters.

The three are "professional criminals" involved in more than a dozen criminal cases.

The three were paid Rs 3 lakh by a Nepali man Brajesh Giri, who allegedly has connections with Shamsul Hoda of Dubai who has links with ISI, the SP said, adding that the money was paid to them to plant a bomb on railway tracks at Ghorasan in East Champaran district, bordering Nepal, in October 1 last year.

"Fortunately, the bomb was detected with the help of villagers at Ghorasan and defused which prevented the sinister designs of the terror elements," Rana said.

The arrest of the trio came in course of investigation in the murder of two persons of East Champaran district in Nepal on December 28 last year for failing to successfully blast bomb on track in Ghorasan, he said.

Efforts are on to arrest, in this connection, two others identified as Gajendra Sharma and Rakesh Yadav, who are "hiding" in East Champaran, he said.

While three persons were arrested from East Champaran district, three others have been captured earlier at Tailaya in Nepal for targeting railways on behalf of suspected terror elements in India, the SP said.

East Champaran is a district bordering Nepal. Indian Mujahideen chief Yasin Bhatkal was arrested from Raxaul in the district in August 2013.