With its reputation badly affected in the aftermath of the Abbottabad raid, the Pakistan Army is systematically working to weaken the civilian government and is using its embarrassment to undermine counterterrorism cooperation with the United States, a noted American expert on South Asian affairs has said.

Ashley Tellis of Washington-based think tank Carnegie Endowment for International Peace said the demise of the civilian government on issues of national security will not only undermine President Asif Ali Zardari's assurance of full support to the war on terror, but will also subvert Pakistan's stability by further strengthening the military that has in the first place 'taken the country to perdition repeatedly'.

"Far from strengthening civilian authority, the army's embarrassment has provided new opportunities to decisively undermine counterterrorism cooperation with the US and further weaken the civilian regime  even as Pakistani military sold fantastic stories about the army chief's struggle to keep his job because of 'excessive' cooperation with the US," he wrote.

He pointed out recent Pakistani actions such as arrest of US informants who supported the bin Laden mission, reduction of Special Forces components training the Pakistani Frontier Corps, sharply increased constraints on clandestine US counterterrorism operations inside Pakistan, the demanded diminution in size and status of the US military assistance mission in Islamabad and the continued support of jihadi groups that continue to target US troops in Afghanistan, as some of the disconcerting realities.

"The United States will find ways to circumvent these problems, albeit at greater cost and with greater risks," he said.

Continuing American appeasement of its generals, he said, has contributed mightily to this outcome. He said except a small section, which persisted in asking hard questions about the army's involvement in bin Laden's sanctuary, 'the state successfully kept up the diversionary drumbeat about bruised sovereignty'.

"A strong civilian government might have used this moment to demand the resignation of the Pakistani chief of army staff and the director-general of the Inter-Services Intelligence, holding them accountable for their failures," Tellis said.

"In Pakistan, however, the opposite happened," he said, with some civilian politicians close to the army actually calling on Zardari and Yousuf Raza Gilani to resign. 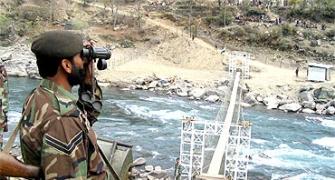 Did Pakistan a favour by making N-bomb: A Q Khan
MQM opts out of the Pak coalition government