Asaduddin Owaisi's All India Majlis-e-Ittehadul Muslimeen has denied reports of going for an alliance with the Samajwadi Party in the forthcoming Uttar Pradesh assembly polls. "We have never said that the AIMIM will go for alliance with the Samajwadi Party if Akhilesh Yadav makes a Muslim leader as deputy chief minister if the party comes into power in Uttar Pradesh. We clearly deny the reports stating that because neither I nor AIMIM chief Asaduddin Owaisi made these statements," AIMIM Uttar Pradesh president Shaukat Ali said.

"We said that the SP has got 20 per cent of Muslim votes in the previous elections and came into power but they did not make any Muslim as deputy chief minister," he said.

Asaduddin Owaisi on Saturday reportedly said that if SP chief Akhilesh Yadav agrees to make any Muslim MLA as the deputy chief minister in Uttar Pradesh then he is ready to form an alliance with the party.

At present, there are 110 assembly constituencies where Muslim voters make up around 30-39 per cent.

Owaisi had earlier visited Lucknow and has been in talks with smaller political outfits.

He is also part of 'Bhaagidari Sankalp Morcha'.

In the 2017 assembly elections, the AIMIM fielded its candidates on 38 seats but could not manage to win even a single constituency.

It decided not to contest the 2019 Lok Sabha polls in Uttar Pradesh.

However, Owaisi campaigned against the Bharatiya Janata Party (BJP).

In 2017, the BJP won a landslide victory by gaining 312 assembly seats. 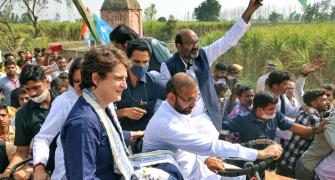 'Cong able to fight UP polls without SP or BSP' 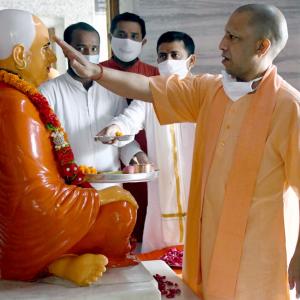 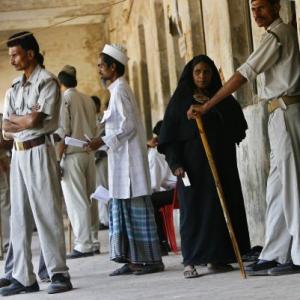