Over 50 injured at PM Modi's Saturday rally venue in Raipur 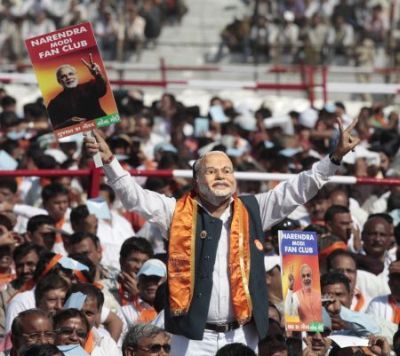 At least 50 persons were injured on Friday, mostly policemen, when the dome over a stage being erected for Prime Minister Narendra Modi's public rally at Naya Raipur on Saturday collapsed in severe storm, forcing cancellation of his engagements there.

"While the work was underway, suddenly the weather changed and a severe storm hit the place, damaging a portion of the dome which fell on the police personnel and workers present," Inspector General of Police G P Singh told PTI.

"Yes, the prime minister's events of Naya Raipur have been cancelled," he said.

The prime minister was scheduled to inaugurate an Indian Institute of Information Technology and Police headquarters, besides laying the foundation stone for construction of 40,000 affordable houses for the Lower Income Group and Economically Weaker Sections at Naya Raipur.

Under the revised plan, Modi, after landing in Raipur, will fly to Dantewada, worst-hit by naxalism, to take stock of socio-economic development initiatives and undertake a road journey of nearly 22 kilometres.

Before flying to Kolkata later in the day the prime minister will address a public meeting at Dantewada, considered a hub of Naxal activities.

Dantewada in tribal Bastar region, is rich in mineral resources, especially iron ore. The area has witnessed a string of naxal attacks in the past, with the worst being the 2010 Maoist assault that left 76 CRPF personnel dead.

The prime minister will have 'Mann Ki Baat' with six children, whose parents had been killed by Maoists, and will be present during the signing of MoUs for setting up an ultra mega steel plant and the second phase of Rowghat-Jagdalpur railway line, state government officials said.

He will visit the Education City in Dantewada spread across over 100 acres and built at the cost of approximately Rs 120 crore. It is estimated to serve almost 5,000 most deprived children of the region every year by providing them the opportunity to have quality education.

Modi will also visit a Livelihood College that has been imparting necessary skills to the youth living in Dantewada region to help them get suitable jobs.

The prime minister will also hand over bonuses to two persons engaged in picking 'Tendu' leaves, used for making bidis, besides handing over key of a pickup van to a Dantewada resident.