News
Business
Movies
Sports
Cricket
Get Ahead
Money Tips
Shopping
Sign in  |  Create a Rediffmail account
Rediff.com  » News » 'Osama was in touch with Mullah Omar till his death'

'Osama was in touch with Mullah Omar till his death'

The documents show a close working relationship between top al Qaeda leaders and Mullah Omar, the Guardian reported, saying this could come as a blow to the new peace moves in Afghanistan.

The news will undermine hopes of a negotiated peace in Afghanistan, where the key debate among analysts and policymakers is whether the Taliban, seen by many as following an Afghan nationalist agenda, might once again offer a safe haven to Al Qaeda or like-minded militants, or whether they can be persuaded to renounce terrorism.

The communications show a three-way conversation between bin Laden, his then deputy Zawahiri and Omar, who is believed to have been in Pakistan since 2001.

They indicate a "very considerable degree of ideological convergence", a Washington-based source familiar with the documents said.

Part of the documents seized by Americans from the high-walled hideout of bin Laden in Abbottabad in northwestern Pakistan is likely to be declassified soon, the daily said.

Some communications in the documents date back several years but others are said to be from only weeks before the raid on May 2 last year in which bin Laden was killed.

"Questions and issues come up. They don't see eye to eye on everything but it's clear they understand they have an interest in co-operating (on attacks against Nato, Afghan government and Pakistani targets)," the source said.

"Of those engaged in the conversation, two (Zawahiri and Omar) are still alive today and there is no reason to believe that either has substantially changed his views in the last year."

Western intelligence officials estimate that there are less than 100 Al Qaeda-linked fighters in Afghanistan, and last year the United Nations split its sanctions list to separate the Taliban and Al Qaeda.

Both David Cameron and US secretary of state Hillary Clinton have said that some kind of political settlement involving the Taliban is key to the stability of Afghanistan once most western troops have withdrawn by 2014.

The range of the al-Qaeda senior leadership's interlocutors revealed by the documents has also surprised investigators, the source said.

Bin Laden appears to have been in direct or indirect communication with Nigerian-based militant group Boko Haram as well as many other militant outfits.

The new documents give a reliable account of bin Laden's life on the run. 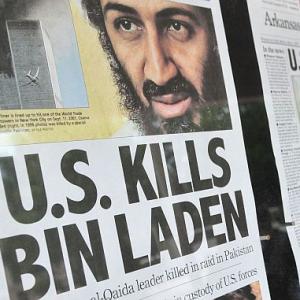 A year later: Al Qaeda refuses to die with Osama