Ever the supporting hero, never the hero, was what people said of O Panneerselvam, famous as the stop gap chief minister of Tamil Nadu. But on Tuesday night he decided to move to the centrestage and emerge as a hero in his own right. At 9 pm on Tuesday, Panneerselvam the caretaker CM went to Jayalalithaa’s samadhi in Chennai and sat there quietly in meditation.

He meditated for 40 minutes, which was enough time for every news reporter in the city to rush there. After meditating, he wiped the tears from his eyes and stood up. Then he prostrated before Amma’s samadhi the same way he must have done a hundred times when she was alive.

He then walked across to meet the gathered press. It took the excited media all of 10 minutes to settle down for the impromptu press conference.

OPS started off saying that when Amma was in Apollo hospital, on the 70th day her health deteriorated very badly. At that time she had told him that he should choose a general secretary acceptable to the cadre.

There was a suggestion to make Madhusudan the general secretary but OPS refused saying that he was not acceptable to all.

“After Amma passed away I became the CM and one of my ministers, Udaykumar, told me, “Diwakar is saying I want to take Akka (elder sister) home she has no work here. You must make her the party general secretary”. I went to Poes garden to check if it was the truth and then supported the idea and made her general secretary.

“As CM I resolved to not let down Amma in my functioning, so her rule gets a good name in the state. I didn’t do it for me, but this irritated them.

“When cyclone Vardah struck people were happy with our government the way we worked. I did it for Amma, it is still her government. When the Jallikattu protests started I went to Delhi. The prime minister said our law was stayed by the Supreme Court so we cannot do anything. He suggested that we come out with an ordinance and his government would support it.

“I drafted the ordinance in Delhi after consulting legal luminaries. I got the home ministry, law ministry, environment ministry and the President to give their okay. I came back with the ordinance and got the governor’s approval. The students said they want a law.

“Chennai did not have drinking water beyond January. I went to Andhra Pradesh and met their chief minister and he immediately agreed to give us water and the water crisis was averted.

“There was an oil spill off Chennai. I went there to tell the state and central officials working there to hurry up with the cleaning.

“I saw Udaykumar giving an interview to a TV channel that Chinnamma should be made CM. I saw our MP in Delhi doing the same thing. I asked her about this, how was this correct, why are you humiliating me like this, and she said she would tell them not to undermine me. But others continued doing it. This has upset the party workers and the people of the state. Party seniors should behave with decorum."

On Sunday last, he said, he was called to the Poes Garden residence of Jayalalithaa which is occupied by Sasikala where senior party leaders, MLAs, ministers and members of her family were present.

"I was called to the meeting about which I did not even know. I went to Chinamma (Sasikala) and they asked me to resign. They said I should resign to make Sasikala the CM. I asked them what's the necessity for an MLAs' meeting. They said both the positions of party general secretary and the CM should be with one person," he said.

"For two hours they tried to convince me. But I asked them whether it is fair to ask me to resign after having elected me the leader of the AIADMK legislature party which I did not want in the first place. Still, I tolerated all the insult just to maintain party discipline."

Panneerselvam said that he wanted to go to Jayalalithaa's samadhi to "vent out everything that was in my mind" but was not allowed.

"At that stage, they forced me, saying you should follow party discipline. I resigned because I was forced to," he said.

“Today I came here as my conscience told me to come and speak to Amma. I sat in front of my Amma to guide me and Amma’s atma told me, “Reveal the truth”. 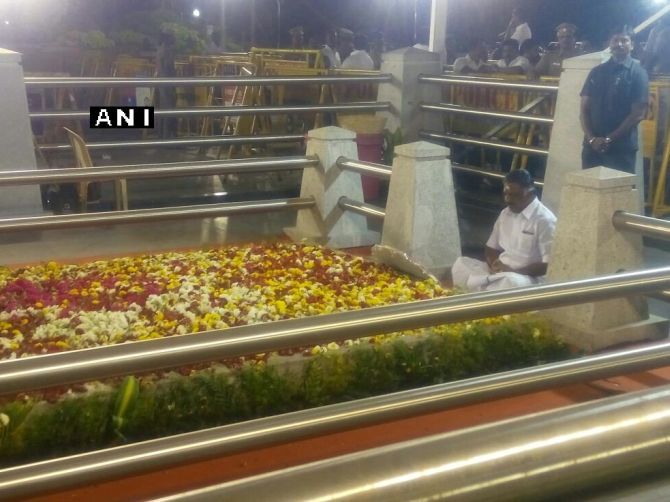 “If the party supports me well and good, and if they don’t I will still protest alone as I have Amma’s blessings. Amma gave us a strong party and a strong government and we will strive to keep it that way.”

When asked if he could withdraw his resignation, Panneerselvam said,"Yes, if people of the state, and party cadres desire so, I will do it."

Narrating the sequence of events since the last days of Jayalalithaa in Apollo hospital, Panneerselvam said that the late chief minister's soul pushed him to say something which was why he was presenting himself before journalists.

He said that almost 70 days after Jayalalithaa was in Apollo hospital Sasikala had discussion with him about how to run the party and the government if something untoward happened to Jayalalithaa.

Panneerselvam said that he was distressed and asked her what was the need to discuss these issues.

Sasikala, in fact, wanted party senior Madhusudhan as General Secretary to which he (Panneerselvam) was not agreeable.

Sasikala said that he was nominated twice by Jayalalithaa as the chief minister and that the party and the government should not be harmed. Then only I accepted it (the chief minister's post), he said.

After two or three days, Health minister Vijay Bhaskar came to me and said that Divakaran, Sasikala's relative, had told him to convey that "you all have become ministers so we are all going back to our town. Let anything happen we are not bothered."

Panneerselvam said all senior ministers told him that Sasikala should be made General secretary, a post to which she was later elected by the party's general council.

After that came the Vardha cyclone and I had worked hard to ensure the government machinery tackled the natural disaster effectively. "I worked hard so that no blame should come to the government that was running in Amma's name," he said.

The chief minister said that a lot of "bad blood" had already been created.

There was a staggering crisis in Chennai with four reservoirs almost empty. He said that he went to Andra Pradesh Chief Minister N Chandrababu Naidu and got 6 tmc feet of water released for Chennai.

Then came the "uprising" in Chennai and other parts of Tamil Nadu by students, youths and others over Jallikattu.

"I went to Delhi and met Prime Minister Narendra Modi and overnight I got an ordinance cleared through home ministry, law ministry, environment ministry to ensure Jallikattu happened," he said.

He said that it was historic occasion in India when in one day the Governor's address was made and an ordinance was introduced and passed. The President's assent was also got quickly.

Panneerselvam recalled that when he went to meet the prime minister, Lok Sabha Deputy Speaker M Thambidurai and 50 MPs had also sought an appointment with Narendra Modi.

The PMO expressed surprise about the demand because the CM had also sought time and both were to discuss same issue.

"I cried over my torment but I didn't get any redress," he said.

"Then the revenue minister Udayakumar said that Sasikala should become the CM. I told Sasikala that is it fair and just that a minister who is appointed by me should say that someone else should become the chief minister. If at that time, the Governor asked me to prove majority what will happen. Then I was told that minister has been spoken to and told to correct himself," he said.

Then the chief minister said he met his cabinet colleagues and told them that the party's senior ministers should play a responsible role.

"In public life, one has to tolerate insult. I also adopted patience because I felt the party and the government should not suffer because of my actions," he said.

It is in these circumstances, the legislature party meeting was called on Sunday about which I had no idea, he said.

Earlier in the day, suspense mounted over the swearing-in of Sasikala as Chief Minister with the Governor C Vidyasagar Rao deferring his plans to go to Chennai, as charges and counter-charges flew thick and fast between AIADMK and rebel leaders over the death of J Jayalalithaa.

In the wake of uncertainty over Governor Vidyasagar Rao's plans, the AIADMK asserted it was the constitutional obligation of the Governor to swear in Sasikala as the chief minister and that there is no ground for stopping it.

Rao, who is in Mumbai, has no plans to go to Chennai as of now, Raj Bhavan sources in Mumbai said, indicating that he could take a decision on Wednesday. Rao, who is Maharashtra governor, is holding additional charge of Tamil Nadu.

With the Supreme Court expected to deliver its verdict in the disproportionate assets case against Sasikala and others next week, political uncertainty grew as opposition parties attacked the move to elevate her as chief minister and the AIADMK came out in strong defence of her.

On a day of hectic activities, P H Pandian, a former Speaker of state Assembly, and his son Manoj, a party functionary, stoutly opposed Sasikala being made the chief minister and alleged foul play in the death of Jayalalithaa who was "pushed" at her Poes Garden home during a quarrel that led to her hospitalisation on September 22.

The AIADMK fielded two of its top leaders Panruti Ramachandran and K A Sengottaiyan at a press conference where they rejected Pandian's allegations and dubbed him as a "betrayer" who was causing "confusion."

"General Secretary in-charge can be appointed," Ramachandran asserted, stating that Sasikala's elevation was in compliance with party rules and that it was valid.

"The constitutional obligation of the Governor is to swear in Sasikala. There is no ground for stopping it. Nobody can stop it," Ramachandran, who was a minister in the first MGR cabinet, said.

Asked about a PIL opposing swearing in of Sasikala as chief minister, he said the court can dismiss the petition, saying it cannot interfere in the Governor's duty.

The press conference at the party headquarters was called to dispel rumours and speculation about Jayalalithaa's death, especially in the wake of media interaction of the Pandians.

Pandian claimed that Sasikala's elevation was against party norms, saying she does not have the locus standi to either be the party chief or chief minister.

"Sasikala does not deserve to be either the party supremo or the Chief Minister," Pandian told reporters, two days after Sasikala was elected AIADMK Legislature Party leader, paving the way for her becoming the chief minister.

Pandian claimed that within 20 days after the demise of Jayalalithaa on December 5, party leaders were "made to say" that they wanted Sasikala to be the party chief.