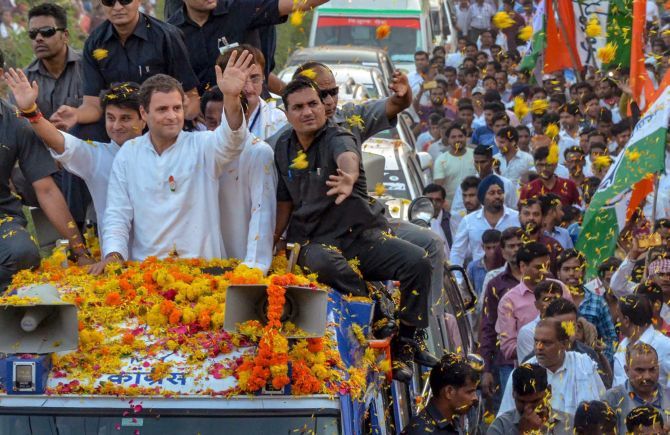 The Bharatiya Janata Party may lose power in Madhya Pradesh, Rajasthan and Chhattisgarh, two opinion polls have predicted, saying the Congress is best placed in Rajasthan, where its state president Sachin Pilot is the first choice of the voters for the chief minister's post.

Surveys carried out by ABP News-CVoter and C fore have given the Congress almost 50 per cent of the vote share and 142 and 124-138 seats respectively in the 200-member Rajasthan assembly, with its state president Sachin Pilot leading Chief Minister Vasundhara Raje as the most preferred candidate for the top post.

While the C fore survey is restricted to Rajasthan, the ABP News-CVoter opinion poll has also predicted the outcome of the assembly elections in BJP-ruled Madhya Pradesh and Chhattisgarh, giving an edge to the Congress in both the states.

The ABP News-CVoter survey has predicted that the Congress may return to power in Madhya Pradesh and Chhattisgarh after a gap of 15 years and will make a comeback in Rajasthan, where Chief Minister Vasundhara Raje seems to be struggling against a strong anti-incumbency factor.

The survey has, however, added that a minor swing in Madhya Pradesh and Chhattisgarh can turn the tide in the favour of either of the two main parties due to a very small difference between their projected vote shares.

The BJP had on Saturday expressed confidence that it would register a 'record victory' in the upcoming state assembly elections and retain power in Madhya Pradesh, Chhattisgarh and Rajasthan.

Senior BJP leader and Law Minister Ravi Shankar Prasad had said the saffron party would secure a record victory on the basis of its hard work and development measures, besides the performance of its governments in the three states.

The opinion poll has said that if the assembly polls are held now, the Congress is likely to win 142 seats in Rajasthan against the BJP's 56.

The ABP News-CVoter poll has predicted 122 seats for the Congress in the 230-member Madhya Pradesh assembly and 47 seats for the opposition party in the 90-member Chhattisgarh assembly.

The BJP has been projected to bag 108 and 40 seats in these two states respectively.

The C fore poll says Pilot, Gehlot and Raje are the first choice of 32, 27 and 23 per cent voters respectively.

However, Madhya Pradesh Chief Minister Shivraj Singh Chouhan and his Chhattisgarh counterpart Raman Singh are the first choice of the voters for the hot seat, despite anti-incumbency sentiments against their governments.

There is, however, a huge gap in the projected vote share of the Congress and the BJP in Rajasthan, with the opposition party being backed by 49.9 per cent voters against the 34.3 per cent share for the ruling dispensation.

The vote share predicted by C fore is 50 and 43 per cent for the Congress and the BJP respectively in Rajasthan.

The BJP had secured power in all the three states in 2013 by winning 165, 142 and 49 seats in Madhya Pradesh, Rajasthan and Chhattisgarh respectively as against the 58, 21 and 39 seats of the Congress.

The C fore survey interviewed 5,788 voters in Rajasthan, while the ABP News-CVoter opinion polls had a sample size of 26,196 voters in the three states.

The Election Commission on Saturday announced that the assembly polls in Chhattisgarh, Madhya Pradesh, Mizoram, Rajasthan and Telangana will be held between November 12 and December 7.

While Chhattisgarh will go to the polls in two phases on November 12 and 20, the elections in Madhya Pradesh and Mizoram will be held on November 28.

Polling in Rajasthan and Telangana will be held on December 7. Counting of votes will be taken up in all the five states on December 11. 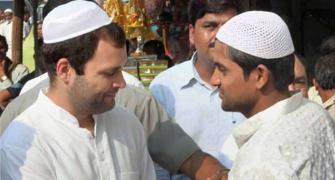