The paramilitary force on Tuesday night had issued a statement and said that "almost all patients are in need of uninterrupted oxygen." Only one-third of the total 500 oxygen beds at the ITBP operated COVID care centre in south Delhi are occupied as the border guarding force said the capacity to admit coronavirus infected patients at the facility is "limited" due to supply of oxygen.

The paramilitary force said there is a huge influx of patients demanding admission at the facility and it has requested the Delhi government to increase oxygen supply so that admissions are increased.

As per latest available data of the Sardar Patel COVID care centre (SPCCC) located in the Radha Soami Beas in south Delhi's Chhattarpur area, the facility that began operations on April 26 has taken a total of 176 patients till now.

The total occupied beds, as per the data, are 164 while nine patients have been discharged, three were referred to hospitals while eight patients have died after admission.

Some patients, out of the 26, were admitted through referrals on Tuesday, officials said.

The paramilitary force on Tuesday night had issued a statement and said that "almost all patients are in need of uninterrupted oxygen."

"The Delhi government has been requested to increase oxygen supply so that admissions are increased," it said.

The statement said "there is a huge influx of patients demanding admission but our capacity is limited by supply of oxygen".

"Efforts are on to gradually increase the capacity of the centre," it said.

Officials had said though the Delhi government has not issued any official order doing away with the mandatory process of getting an approval of the district surveillance officer (DSO) for admitting patients at this centre, some were allowed in "on the basis of referrals, considering the condition of the patient and following due processes".

The facility has been opened in view of Delhi registering a sharp rise in coronavirus cases, a shortage of oxygen beds and its healthcare system not being able to handle the pressure.

The ITBP, a border-guarding force, has been designated by the Union Home Ministry as the nodal agency to run it.

The SPCCC, at present, only has oxygen beds and no ICU and ventilator facilities.

According to the laid out procedure, the SPCCC will have no walk-in admissions and these will be made after approval by DSOs of various Delhi districts.

The ITBP has said that treatment, medicines and food for the patients at this centre will be free of cost. The cost is borne by the Delhi government.

As the centre opened on Monday, a number of patients whose oxygen levels were fluctuating had voluntarily queued up outside the facility with a hope of getting admitted there.

However, they could not get admission and were asked to follow the set protocol.

A number of patients were unsuccessful in getting admission on Tuesday too.

ITBP Deputy Inspector General (DIG) D K Goyal had told reporters at the facility on Monday that the standard operating procedures (SOPs) state that patients whose oxygen saturation level is 85 or above will be admitted to the facility as it is a COVID care centre and not a hospital.

The SOPs state that the patients who require intensive or better medical care will be referred to GTB and Safdarjung hospitals from here.

According to officials, patient's details like age, address, contact number, oxygen level, pulse and comorbid conditions will be obtained and after an assessment by a team of doctors, those eligible to get admitted will be communicated through their contact number.

The DSOs are also to be empowered to recommend patients to the SPCCC, according to the SOP.

A team of 50 ITBP and other organisations' doctors, about 80 paramedics and nursing staff, security personnel of the border-guarding force and other administrative staff have been tasked to run the centre that is expected to add more beds in the coming days.

The Ministry of Home Affairs (MHA) had declared on April 22 that the SPCCC, which was made operational in July last year and shut in February this year as the number of coronavirus infections declined in the national capital, was being restarted on the Delhi government's request as the cases were rising rapidly once again.

A total of 11,657 COVID-19 patients were treated at this centre between July and February.

Delhi is currently facing shortage of oxygen beds for serious COVID-19 patients and has almost run out of ICU facilities amid soaring infections. 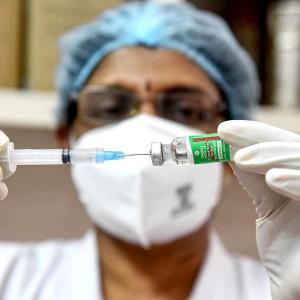