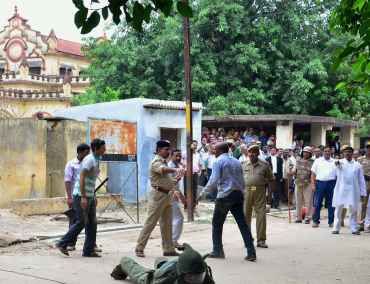 In a daring attack inside the court complex in Faizabad, two persons allegedly threw crude bombs and opened fire at a local politician, prompting his gunners to retaliate, killing one of the attackers.

A case has been registered against 11 persons in connection with the attack, including former UP minister Vinod Kumar Singh, police said.

Six persons, including local politician Yashbhadra Singh alias Monu and his lawyer, were injured in the attack.

"Block chief of Dhanpatganj, Yashbhadra Singh alias Monu, came to appear in court in connection with the a murder case" when he was attacked with bombs by Jayendra Sharma and Sahil, allegedly to avenge killing of one Sant Gyaneshwar, Inspector General of Police (law and order) Amrendra Singh Sengar told reporters in Lucknow.

As Monu came under attack, his gunners are said to have returned fire, shooting dead one of the attackers, Sahil. Police said that Sahil hailed from Nepal.

Sengar said that the second attacker, Jayendra, was arrested and three live bombs were recovered from his possession.

Along with Monu, his lawyer Rishi Dev and four others were also injured, police said, adding that they were rushed to Lucknow for treatment.

Monu had contested 2012 assembly polls as a Peace Party candidate.

The officer said that a case has been registered against Vinod Kumar Singh, a minister in the previous BSP government, along with Kamla Devi, Jayendra and seven to eight unidentified persons.

"There are 19 cases against Monu, who is also a history-sheeter," Sengar said, adding that the attack could be the result of an old enmity.

Secretary (home) Kamal Saxena said it had to be probed as to how bombs and weapons were taken inside the court complex despite the tight security there.

Action would be taken after getting a detailed report from the district administration, he added.

Saxena said that ADG (law and order) Mukul Goel and the Commissioner Faizabad and the DIG (range) have reached the spot.

The IG said that one-and-a-half sections of PAC, two sub- inspectors, eight constables and 15 home guard jawans were deployed for providing security on the court premises.

"We have arrested a person who was involved in the attack... Preliminary investigation suggests that this attack may be related to the Sant Gyaneshwar murder case".

Image: Tension at the Faizabad court complex following a clash 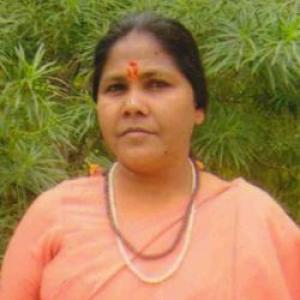 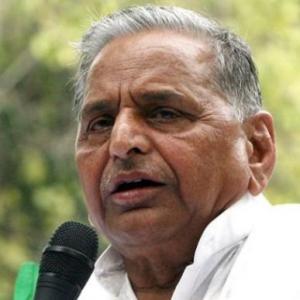