'A heartfelt connection with the Obamas' 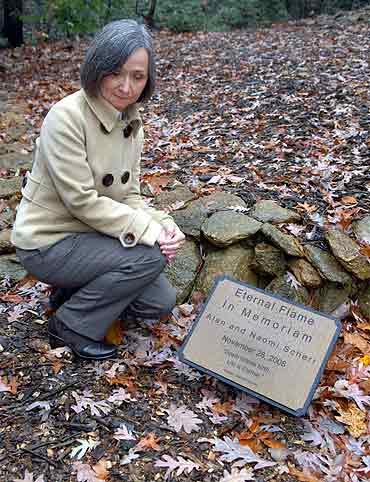 Kia Scherr, whose husband Alan and thirteen-year-old daughter Naomi were brutally gunned down by terrorists at the Tiffin restaurant at the Oberoi hotel during Mumbai's 26/11 attacks, has been in Mumbai since September.

This resident of Virginia has been planning a special ceremony to commemorate the second anniversary of the victims of the terrorist strikes.

Scherr is working, as part of this ceremony, on establishing her 'counter-terrorism' network -- One Life Alliance -- to heighten awareness of the sacredness of life.

Shortly after she arrived in Mumbai, Scherr was pleasantly surprised and touched to receive an invitation to a reception organised by the US consulate in Mumbai for Barack and Michelle Obama to meet victims of the 26/11 terror attacks when they came to India.

Scherr's account of her meeting with the President and First Lady of her country, first at the Taj Mahal hotel and later opposite the Gateway of India:

A couple of weeks ago I got a letter from the US consulate (in Mumbai).

They (the consulate) have been just absolutely wonderful. They really organised all of us there and they just did a great job.

There were 12 people, staff from the Taj and The Oberoi (who initially met the Obamas inside the Taj hotel). These were the staff on duty the night of 26/11; some were wounded. Some of them lost family members. Those were the people that were invited.

The president and his wife came in and took time, one by one, to shake everybody's hand and spend a moment talking with them to find out who they were and what they did there in the hotel.

Then we went out and met a larger group about 100 people. I was with the small group (inside) and the large group. Outside there were a lot more families of victims. And (there too) they (the Obamas) went right into that crowd, shook hands and got photos taken. Anyone who asked for a photo, got one.

They (the Obamas) were very available, very warm and personable. I thought I had a heartfelt connection with them.

I thanked him for sending me a beautiful condolence letter when he was president-elect (after the death of her husband and daughter in 2008). I felt moved to just share that we have an opportunity to create a positive outcome to a terrible tragedy if we take a stand on the sacredness of life.

The whole time we were talking, we were holding hands and he looked right in my eyes. It was very moving.

Then he introduced me to Michelle Obama, saying, "Here's another mother." Michelle said: "How are you? How are you doing." I said I am being very welcomed here and I thanked her for the great work she was doing and she said we have a lot more work to do.

It was amazing. The organisers of the ceremony did such a great job. We probably were in there for about three hours. the hotel gave us tea and light refreshments and made everybody comfortable.

I had a chance to meet members from both sides, the US ambassador and everybody else and talk with everybody. I met Mr Kang (Taj hotel General Manager Karambir Kang who lost his wife and two sons in the 26/11 attacks). That was quite an emotional meeting.

Image: Kia Scherr at the site in Virginia where the ashes of her husband Alan and her daughter Naomi are placed. Photograph: Paresh Gandhi/Rediff.com

ALSO SEE: 'I don't want Kasab to be given a death sentence'
Video: This eternal flame is for everyone who died in the attack' 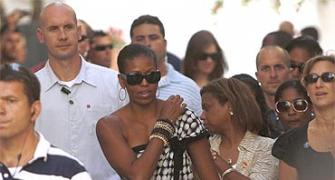 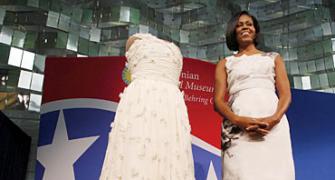 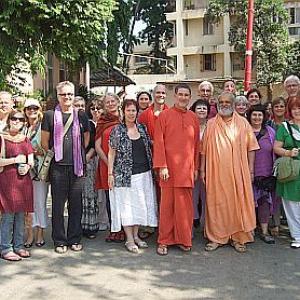 India is more than a second home to him

Obama connected with his heart: 26/11 survivor