Obama likely to assure PM on protecting Sikhs in US

Barack Obama's spokesman Jay Carney said that the US president has no immediate plans to speak to Prime Minister Manmohan Singh regarding the horrific massacre of Sikh Americans Sunday at a gurdwara in Oak Creek, Wisconsin.

But sources said such a call was likely in a day or two, during which Obama would assure Dr Singh that he has ordered all security precautions to protect this community that has been virtually frozen by fear, following this worst-ever attack against Sikh Americans in the history of the United States.

Carney, at the outset when peppered by questions if, in the wake of this awful tragedy, had any plans to do something about gun violence and gun control, said, "Let me say at the top that the president and the first lady, as was noted yesterday, were deeply saddened to learn of this tragic shooting that took so many lives."

"The president made clear that his administration will provide whatever support is necessary to the officials responding to this event and to the investigation, which the FBI, as you know, is involved in. The president also made clear -- and this is important -- how much our country has been enriched by Sikhs, who are a part of our broader American family."

Tracing the genesis of how the president was informed of the massacre, Carney said, "The president was notified shortly before 1:00 p.m. by his Homeland Security Advisor John Brennan, yesterday. Later in the afternoon, the president convened a call with FBI Director Bob Mueller, Chief of Staff Jack Lew, and Homeland Security Advisor Brennan to receive an update. Following that briefing, the president called the governor of Wisconsin, Scott Walker, Oak Creek Mayor Steve Scaffidi, and the trustee of the Sikh Temple Charanjeet Singh to express his condolences for the lives lost and his concern for those who were injured."

On the broader issue of gun violence and gun control, Carney said, what the president had said at a recent speech to the Urban League in New Orleans, following the recent massacre of innocents by another lone gunman at a movie theatre in Aurora, Colorado, "is still the case."

"He believes that we have a broader issue with violence in America that needs to be addressed from a variety of angles, including efforts that this administration has undertaken to work with local communities to try to get children out of gangs, to get kids back in school, working with local law enforcement in their efforts to fight crime."

Carney said, "Incidents like this are horrific, and our hearts go out to the victims and their families, and to the Sikh community in Wisconsin. But we cannot lose sight of the fact that there is violence all the time in America and that we need to take concerted action to deal with it."

But when pressed if he has any specific plans following the latest massacre, this time of Sikh Americans in their place of worship, Carney said, "I have nothing new to announce. I mean, he did very recently give those remarks at the Urban League and he'll continue to instruct his administration to take action towards common-sense measures that protect the Second Amendment rights of law-abiding citizens, but make it harder and harder for those who should not have weapons under existing law to obtain them. Some progress has been made on those instructions with regards to our background check system. And the president will continue to press that, as well as pressing the variety of ways that this administration is assisting local communities in their efforts to combat violence."

However, law enforcement officials have said, the shooter of those in the Oak Creek, Wisconsin gurdwara, Wage Michael Page, 40, who has been variously described as a "white supremacist" and "neo-Nazi" had obtained his hand-gun -- that was responsible to the carnage -- legally.

America, a country with a population of 330 million people has as many guns in circulation, including assault weapons which can fire off as many as 100 bullets in a minute, that have all been apparently obtained legally.

On the question of the president speaking to Prime Minister Singh regarding the shooting at the gurdwara, and what, if any, assurances can the president or federal law enforcement authorities give to the Sikh community in America that they will be protected from this kind of atrocity, Carney said, "On the first part of the question, I have no other foreign leader calls to read out to you at this time. The president and the first lady yesterday and again, through me today, expressed their deep condolences to the families of the victims and to the community that was affected. And the president noted yesterday, as I am today, the important contribution that Sikhs have made and continue to make to the broader American community. And we need to remember that."

Meanwhile, he said, "The specifics of this particular incident are under investigation, so questions that go to motive, to the perpetrator, those kinds of things, I would have to refer to the FBI, which has a role in this investigation, as well to local law enforcement."

When pressed on any special security measures, Carney reiterated, "Again, that goes to motive about -- and I wouldn't want to speculate at this time. And I think that I would refer you to the FBI and to local law enforcement."

The spokesman was non-committal when pressed if the latest massacre of innocents called for gun control legislation, simply repeating Obama's remarks at the Urban League that "we need to take common-sense measures that protect Second Amendment rights and make it harder for those who should not have weapons under existing law from obtaining weapons."

"I think he made clear, too, in his speech in New Orleans that violence in America is a problem that is greater than just the issue of gun laws. And he talked very clearly about the prevalence of violence in America, that even as overall statistics show that crime has gone down over these last many years but there is still too much violence. "

Carney acknowledged that the killing of innocent Sikh Americans at the gurdwara, "are horrific, and our hearts go out to the victims of such appalling acts of violence, but we should not forget that there are victims of violence every day in America, and we need to address that problem in a concerted way that deals with education and summer jobs and other ways to help address the violence problem in America."

But Carney acknowledged, "It is certainly the case that Sikhs have been targeted in America in the past, since 9/11, because they have been believed to be Muslims, and that has been a tragic event -- I mean, a violent -- whether it's against Sikhs or Muslims, this is clearly horrible and unacceptable. But I can't address the motivation behind yesterday's attack because it's under investigation by the FBI and by local law enforcement."

Asked if the president would travel to Oak Creek to condole with the Sikh families and victims affected by this tragedy, he said, "As for the president's schedule, I don't have any announcements to make about upcoming travel. If I do, I will certainly make everyone aware of that travel."

"But I just want to be clear and to reiterate, the president feels very strongly that we need to remember on a day like today the profound contributions that the Sikh community has made in this country. And as you note, this is a very peaceful community, and it is a horrific thing when this kind of event takes place in and around a house of worship of any kind. And our hearts go out to the victims and to their families."

When pressed on the fact that Sikh Americans have been targeted in the past, which he himself had admitted, and if it were time for the administration to step up with some kind of educational campaign, something to help this community because there is a lot of concern among that community that they've been unfairly targeted and will continue to be targeted in the future, Carney continued to be circumspect.

"I appreciate the question," he said, but noted, "it's safe to say that you wouldn't have asked me this question on Friday. And I think that reflects that it relates specifically to this incident. And because I can't address or speculate about motivation in this incident because it's under investigation, I can't -- I think it would be inappropriate for me to talk more broadly about that issue because you would be understandably making assumptions about our conclusions about this specific incident that we can't make when the FBI and the local law enforcement are still investigating. And it's only been 24 hours. I think it's important to note that."

Later, when a White House press pool was ushered into the Oval Office where Obama signed the Honouring America's Veterans and Caring for Camp Lejeune Familites Act, reporters shouted out questions about the Oak Creek massacre and if this would prompt him to pursue gun control.

Obama said, "We are still awaiting the outcome of a full investigation," but added, "all of us are heartbroken by what happened."

He bemoaned that such events happen "with too much regularity," and reiterated that he would "examine additional ways to reduce violence," but did not commit to calling for any new gun-control laws.

Obama acknowledged that news reports seemed to suggest that Page may have been motivated by racial prejudice, and asserted, "Regardless of what we look like, where we come from, or where we worship, we're all one people." 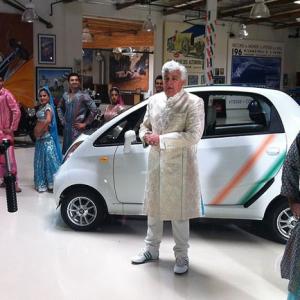 Jay Leno gets himself a Nano!

Gurudwara shooting: 'Sikhs in US should install CCTVs'