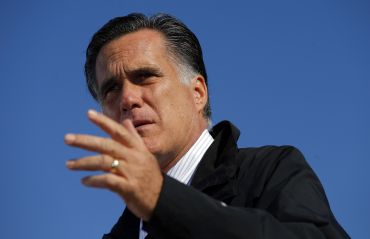 United States President Barack Obama has "fallen short" of the promises he made to the people of the country four years ago as cared more about a liberal agenda than about repairing the economy, Republican presidential candidate Mitt Romney said on Monday.

"The president promised a lot of change but change can't be measured in speeches. It has to be measured in achievements and four years ago, candidate Obama promised to do oh so very much but he's fallen also very short," Romney said launching another blistering attack against his challenger at an election rally in Florida.

He is scheduled to address rallies in Virginia and Ohio before ending his campaign in New Hampshire around mid-night. He would be joined by his wife Ann Romney.

"You hoped that President Obama would live up to his promise to bring people together and to solve problems. He hasn't; I will. And you know why he fell so short -- you know why he fell so short of what he promised. He cared more about a liberal agenda than about repairing the economy," he said addressing a large cheering crowd in Orlando, Florida, a key battle ground state.

Romney said he is the one who would bring real change in the country.

"I think you know that the President promised change, but he couldn't deliver change. I not only promise change, I have a record of achieving it... that's why I'm running for president. I know how to change the course the nation is on.

"If you believe we can do better, if you believe America should be on a better course, if you're tired of being tired, then I ask you to vote for real change; Paul Ryan and I will bring real change to America from day one," Romney said.

Meanwhile, Obama asked the countrymen not to surrender to status quo which is represented by special interest and lobbyists in Washington and instead vote for him promising that he needs another four years to bring in the real change in the country.

Post mid-night he and the First Lady head back to Chicago, his home town, where he will stay on Tuesday and address his supporters later Tuesday night after the election results come.

"Listen, we know what change looks like. And what he's selling ain't it. Giving more power back to the biggest banks -- that's not change," Obama said.

After Wisconsin, Obama will travel to Ohio before ending his campaign at a late night event in Des Moines, Iowa.

"Changing the facts when they're inconvenient to your campaign, not change -- which raises something else about this presidential campaign. It's not just about policies; it's also about trust. It's also about trust," Obama said attacking Romney.

"You know me by now. You may not agree with every decision I've made, Michelle doesn't either. You may be frustrated at the pace of change. I promise you, so am I sometimes. But you know that I say what I mean and I mean what I say," Obama said.

In an apparent response to the Republican critic that he has not been able to deliver what he had promised four years ago, Obama said he knew in 2008 that this is not going to be easy.

"We know what the future requires. But we also know it's not going to be easy. You know, back in 2008, we talked about it. I know everybody sometimes romanticizes the last campaign and the posters, you know, all the good feeling. But I said back then when I talk about change, I'm not just talking about changing Presidents or political parties. I'm talking about changing how our politics works," he said.

Image: Republican presidential nominee Mitt Romney speaks at a campaign rally at the airport in Lynchburg 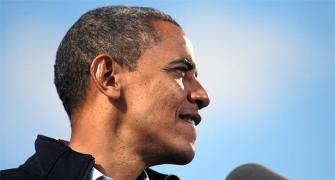 With a day to go, Obama-Romney war of words reaches climax 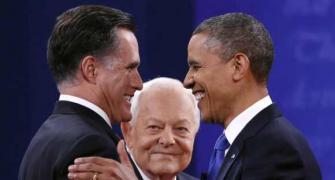 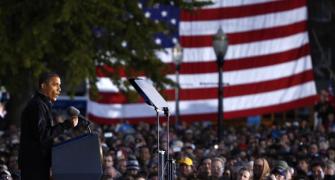 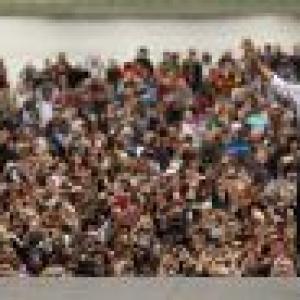