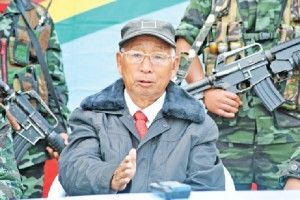 Nationalist Socialist Council of Nagaland-K leader S S Khaplang, whose outfit carried out the June 4 attack on the Army in Manipur, is believed to be ill and convalescing in a Yangon hospital.

Khaplang, 75, suffering from old-age related ailments, was shifted from his base in Tago, located along the Sino-Myanmar border, to Myanmar's biggest city Yangon about four months ago, official sources said.

Myanmar had informed India about shifting Khaplang, who is a Myanmarese national, to Yangon in February and New Delhi had conveyed its no objection to that, sources said.

NSCN-K was then in a ceasefire agreement with the government. However, barely a month after being shifted, the outfit ended the agreement.

"We believe Khaplang continues to be in Yangon, undergoing treatment," a senior official said.

Khaplang is a Hemi Naga from Myanmar and was born in April 1940 in Waktham village east of Myanmar's Pangsau Pass, through which passes the 1,763-km Stilwell Road from Ledo in Assam to Kunming in China.

Khaplang had said he first attended a school in Margherita in Assam before joining the Baptist Mission School in Myitkina, Kachin, in 1959 and going to another missionary school in Kalemyo in 1962 before he eventually dropped out.

The insurgent leader, along with Isak Chishi Swu and Thuingaleng Muivah (NSCN-IM leaders) revolted against the Shillong Accord of November 1975 that was signed by Angami Zapu Phizo's Naga National Council.

The three leaders then formed the NSCN (Nationalist Socialist Council of Nagaland). In April 1988, Khaplang announced the formation of NSCN-K after making an unsuccessful attempt on Muivah's life.

NSCN-K along with a few Manipuri outfits was responsible for the killing of 18 Army personnel in Chandel district of Manipur on June 4 that prompted retaliatory action by India in which his group was claimed to have suffered significant casualties.