Notification for fourth phase of UP polls issued

Notification for the fourth phase of Uttar Pradesh Assembly elections was issued on Wednesday, setting in motion the process of filing nominations.

"More than 1.72 crore voters are expected to cast their votes at 18,209 polling booths at 12,821 polling stations where 19,029 electronic voting machines would be used," according to the Election Commission.

In this phase, senior BJP leader and Rajya Sabha member Kalraj Mishra would be making his debut in electoral politics from Lucknow east seat, whereas UPPCC president Rita Bahuguna Joshi would be contesting from Lucknow Cant seat.

Chairman of Housing and Development Board Achche Lal Nishad would be contesting from Tindwari while chairman of UP Agro Brijmohan Singh Kushwaha would file nomination for Baberu seat.

Synonymous with women empowerment in Bundelkhan region and leader of Gulabi gang, Sampat Pal would also be in the fray as a Congress candidate.

Veer Singh, son of slain dacoit Daddua, would be contesting for Karvi seat in Chitrakoot as SP nominee. 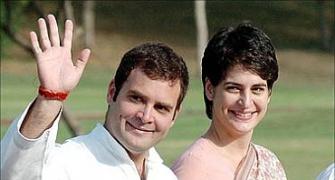 Digvijay's fresh ploy to divide BJP's leadership in UP