The Samyukta Kisan Morcha on Friday condemned the lynching of a man at a farmers' protest venue at Kundli near the Delhi-Haryana border and claimed that there could be a conspiracy behind the incident. 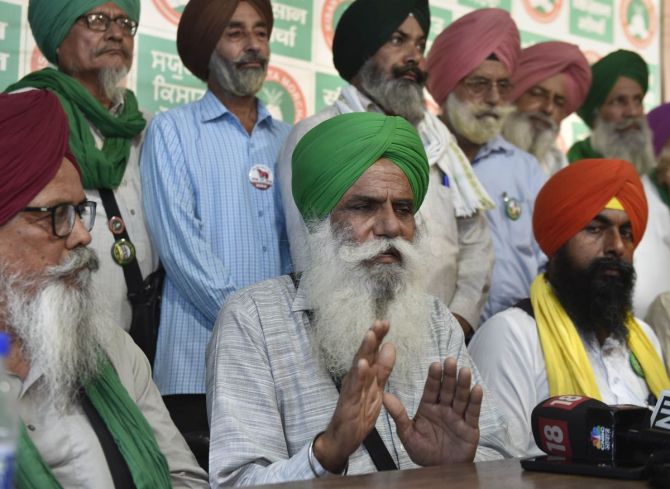 The umbrella body of 40 farm unions spearheading the farmers' agitation against the Centre's three agri laws also demanded a thorough probe into the matter and said those responsible should be brought to book.

The body alleged that a religious colour is being given to their movement.

A man was lynched, his hand chopped off and the body tied to a metal barricade at a farmers' protest venue at Kundli, a gruesome incident being blamed on a group of Nihangs.

In a video clip that has gone viral on social media platforms, some Nihangs are seen standing as the man lies on the ground in a pool of blood with his chopped off left hand lying next to him.

The Nihangs are heard in the clip saying the man has been punished for desecrating a holy book of the Sikhs.

The Nihangs are a Sikh order, distinguished by their blue robes and often seen carrying spears.

"We are all very saddened at what happened. The Samyutka Kisan Morcha is fighting against the three farm laws. This (incident) could be a conspiracy. We condemn the incident in the strongest words," said Jagjit Singh Dallewal, a farmer leader from the organisation.

He said the matter should be probed thoroughly and the accused should be brought to book.

Dallewal said they have learnt that the victim, Lakhbir Singh, had been staying with the Nihang Sikhs, and had allegedly tried to steal the Sarbloh Granth, a holy book of the Sikhs.

"We condemn disrespecting of any religion. We also condemn the reaction (killing)," he said.

The SKM claimed that the killing was an internal matter between the Nihang Sikhs and had nothing to do with the farmers movement, which is not a religious one.

The farmers' movement is for the rights of farmers and against the three farm laws.

Farmer leader Kulwant Singh alleged that the central agencies are behind the incident and demanded a probe into the matter.

"When we got to know about the incident, we rushed to the site. By the time we reached there, the man had died. We urged Nihangs that police have come here and they are requesting us to hand over the dead body to them.

"The body was later handed over to police. We condemn this act," he said.

In a video message, Yogendra Yadav also condemned the incident and said such kind of incidents cannot be accepted in a civilised society.

"The man had been staying with the group of Nihangs for 2-3 days. Last night, there was a dispute among them and there were allegations of sacrilege," he said.

He said this is not religious movement, but it is a farmers' movement and several SKM leaders have asked them (groups of Nihangs) to leave, but despite that they have been staying there (at protest site).