Claiming that normalcy had come back to Bangalore, Karnataka Chief Minister Jagdish Shettar on Saturday exuded confidence that people from northeast, who had left the city due to "rumours", would soon return and said those behind spreading panic would be dealt with sternly.

Shettar, who was in New Delhi to attend the BJP chief ministers' conference, said that despite rumours, not a single untoward incident had occurred in the state after one minor incident.

"Some rumours had been spread...but uptil now not one untoward incident has taken place in Bangalore. Yesterday five persons have been arrested by the police and we have started investigations and we'll find out the culprits and punish them...those behind spreading rumours will be dealt with sternly," he said.

The Karnataka chief minister also said ministers from northeastern states had inspected the steps taken by his government and had expressed satisfaction.

"Cabinet ministers from Assam and other states came yesterday and expressed satisfaction over all the security measures taken by the state government," he said.

When asked who were responsible for spreading these dangerous rumours, Shettar said it will come out after investigations.

He said many people from the northeast had gone because their family members had called them and would be back soon. 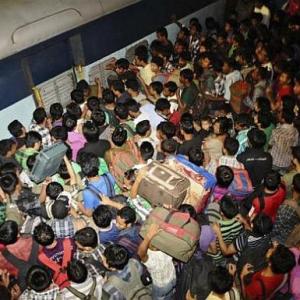