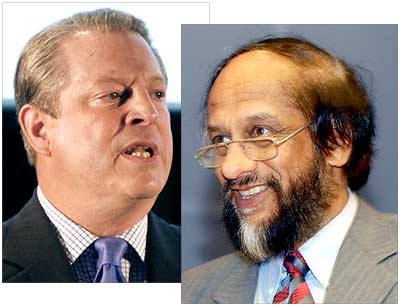 Dr Rajendra Kumar Pachauri is the chairman of the IPCC, the influential body established by the World Meteorological Organisation and the United Nations Environment Programme, to investigate global warming and its consequences for Earth.

The Nobel committee, in a citation, said, the two were awarded "for their efforts to build up and disseminate greater knowledge about man-made climate change, and to lay the foundations for the measures that are needed to counteract such change."

Dr Pachauri, who has been the IPCC's chairman since April 2002, has a double PhD from North Carolina State University, Raleigh, USA, in industrial engineering and economics. He has headed The Energy Research Institute (formerly the Tata Energy Research Institute) in New Delhi since 1981, first as director, and since April 2001 as director-general.

The 67-year-old Director-General of the environmental organisation Tata Energy Research Institute reacted by saying that with the award, the issue of climate change will come to the fore. "I was not expecting any awards for my efforts. I feel privileged to share it with Al Gore. I am only a symbolic recipient but it is the organisation which has been awarded," Pachauri said.

Gore, who was the vice-president in the Clinton administration and who lost a controversial presidential poll to US President George W Bush in 2000, made the 2006 Oscar-winning documentary An Inconvenient Truth, after which he was seen as a champion of environmental issues and climate change.