No lull and dip in Indo-US relationship: Nancy Powell

Source: PTI
June 09, 2012 10:33 IST
India and the United States have jointly refuted the perception that there was a "lull and dip" in the relation between the two countries and it is "oversold".

Indian Ambassador to the US, Nirupama Rao and her American counterpart, Nancy Powell, while responding to a volly of questions from audience at the Center for American Progress, said that was certainly not the case.

"I reflect every once in a while as I read the press both in the US and in India, they keep talking about this lull and this dip in our relations. I keep thinking they clearly haven't looked at my calendar for the last six weeks or the next six weeks," Powell said.

"It is an incredible array of activities that we are engaged with in India, and so much broader, so much deeper than when I was there," said Powell, whose past posting in India was in 1995.

Rao, while arguing said, "The relationship is certainly not oversold, in my view. There is certain logic, a certain rationale for close partnership between India and the United States. That is recognised not only in Washington, but also in India, where there is a multi-partisan consensus about the need to progress this relationship forward."

Responding to questions, she said she had conscientiously objected to these formulae or these approaches or these analyses about the relationship.

"I deal with it on an everyday basis. I look at it at the ground level, and I see the extent and the depth and substance of the kind of dialogue and cooperation that is happening between the two countries," the Indian ambassador argued.

"I would say this relationship is certainly -- it's not being -- it's not in a situation or a place where we are just engaged in meaningless conversation or just an empty bandying of words or concepts. There is really tangible progress that has been recorded and has been achieved, in my view," Rao said.

Referring to recent India visits by US Secretary of State Hillary Clinton and Defence Secretary Leon Panetta, Powell said a vibrant dialogue going on between the two countries now.

"I think people that expected India and the US to be in lockstep probably don't have any appreciation of the independence of either of us, that we are going to pursue our interests, our policies. But the consultations that go into that, the ability to say we agree on these things, we agree on this goal, we're going to take a slightly different tactic, I think that piece is increasingly done without acrimony. It's done routinely. There is a transparency," she said.

Source: PTI© Copyright 2022 PTI. All rights reserved. Republication or redistribution of PTI content, including by framing or similar means, is expressly prohibited without the prior written consent.
Related News: Nancy Powell, India, United States, Nirupama Rao, Leon Panetta
Print this article
'India-US ties reached a momentum of great opportunity'
Panetta pledges to provide technology access to India
Why India, US have reached out to China 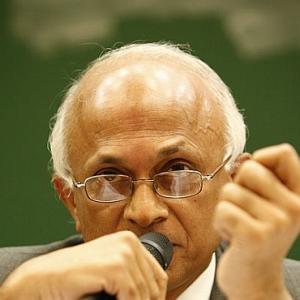