Over a month has gone by, but Delhi Police is yet to make a headway in the suspected terror strikes outside the historic Jama Masjid which created a security scare ahead of the Commonwealth Games.

The city police has announced a Rs ten lakh reward for providing information about the two bikers who opened fire at a Taiwanese media crew at Jama Masjid on September 19, but investigators have not got any credible information.

A day ahead of the announcement of the reward, two Kashmiris had approached the police claiming that they were sent to paste inflammatory posters on Ayodhya in central Delhi by some persons who were harassing their families.

Though police investigated whether those people who sent the Kashmiris to Delhi were involved in the firing incident, no breakthrough was made in this direction. Investigators have questioned over 50 people in connection with the strikes but "no concrete" headway has been made in the probe while several teams are in Uttar Pradesh and Mumbai to find some links in the case, a senior police official said.

Police initially attributed the firing on Taiwanese media crew and a car catching fire after a "crudely circuited and poorly assembled" device went off withing two hours after the first incident to "disgruntled youths and local criminal gangs" ruling out involvement of any organised terror outfit.

despite outlawed Indian Mujahideen claimed responsibility for the strikes and warned of more attacks ahead of the Games in an email send to several media organisations.

However, the next day Delhi Police did a somersault saying they cannot rule out a terror angle and even Police Commissioner Y S Dadwal exclaimed "who said that" when asked about the investigator's stand the previous day.

Even police had on September 19 maintained that there were no traces of any explosives in the device which they recovered from the car when already a case under the Explosives Act was registered.

However, later it came to light that ammonium nitrate was used in the device which had two timers -- 11:30 am and 12 noon -- set for explosion. No RDX or detonators were recovered, police said.

The only headway it could make was tracking the IM email to Borivali in Mumbai suburbs. The email was sent using a
Tata mobile and it had a SIM purchased by an unidentified youth in the name of a woman.

The Maharashtra Anti-Terror Squad prepared a sketch and even went to two addresses provided by central intelligence agencies as the youth had purchased two SIM cards. Investigators suspect that a laptop might have been used to attach a PDF file in the email sent by Indian Mujahideen claiming responsibility for the attack and it was located to a server in Norway. The SIM card was put in a GPS activated mobile phone.
Source: PTI© Copyright 2021 PTI. All rights reserved. Republication or redistribution of PTI content, including by framing or similar means, is expressly prohibited without the prior written consent.
Related News: SIM, Jama Masjid, Delhi Police, Mumbai, Kashmiris
SHARE THIS STORY
Print this article 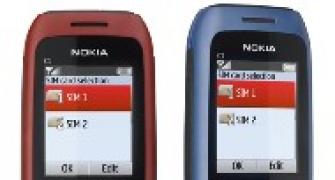