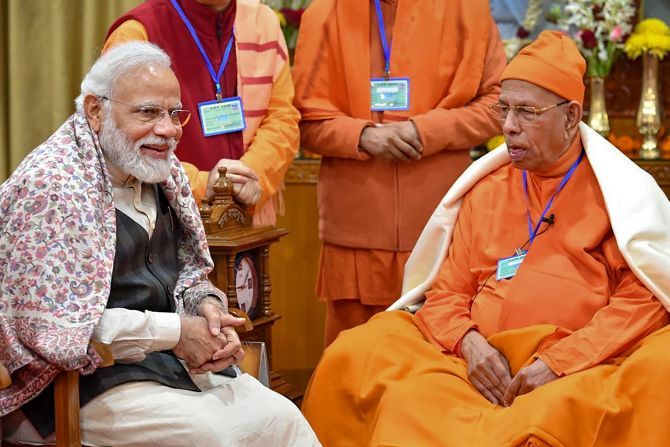 The Ramakrishna Math and Mission on Sunday distanced itself from Prime Minister Narendra Modi's remarks on the Citizenship (Amendment) Act, contending that it was a strictly apolitical body which did not respond to 'ephemeral' calls.

The prime minister, during his address at Belur Math -- the headquarters of Ramakrishna Mission -- said that the new law would not take away anybody's citizenship, and a section of the youth was being misguided about the Citizenship (Amendment) Act or CAA.

Addressing a press meet, Swami Suvirananda, the Ramakrishna Math and Mission general secretary, said, "The organisation will not comment on the prime minister's speech on CAA. We are a strictly apolitical body. We have come here after leaving our homes to answer eternal calls. We do not respond to ephemeral calls."

He said Modi was a guest and the onus was on him on what he had spoken at the Math.

"But when you have a guest... Atithi Devo Bhava is the Indian culture. And you must extend all kinds of courtesies, decencies to him. And if something you feel ought not have been told, the onus lies on the person who tells it but not on the host -- by no logic," he added.

Swami Suvirananda further said that both Modi and Chief Minister Mamata Banerjee are not politicians but leaders holding constitutional posts.

Asked whether Modi's speech on the CAA was an attempt to 'saffronise' the Mission, Swami Suvirananda said, "We are already saffron but that doesn't mean that we are saffron in the sense that is being interpreted in politics today."

He said the Mission believes in inclusivity and is the only order in the world where the monks do not cast their votes.

"We are inclusive as an organisation, only order in the world which has monks from Hindus sects and from even Islam... Islamic people from Iran and Iraq. Ours is the only organisation which has Christian monks, hundreds in numbers, Buddhist monks and we live like brothers, more brotherly than the brother born to same parents... What more inclusiveness do you want?" he said.

Modi, who came to the city on Saturday evening on a two-day trip to attend 150 years celebrations of the Kolkata Port Trust, spent a night at the Math in Belur.

The prime minister described his visit to the Math as a 'homecoming'.