No animosity, no friendship, only issue-based support: TRS on NDA

The Telangana Rashtra Samithi would give issue-based support to the Bharatiya Janata Party-led National Democratic Alliance government, a senior leader of the ruling party in Telangana said on Friday, ahead of the commencement of the Lok Sabha session next week. 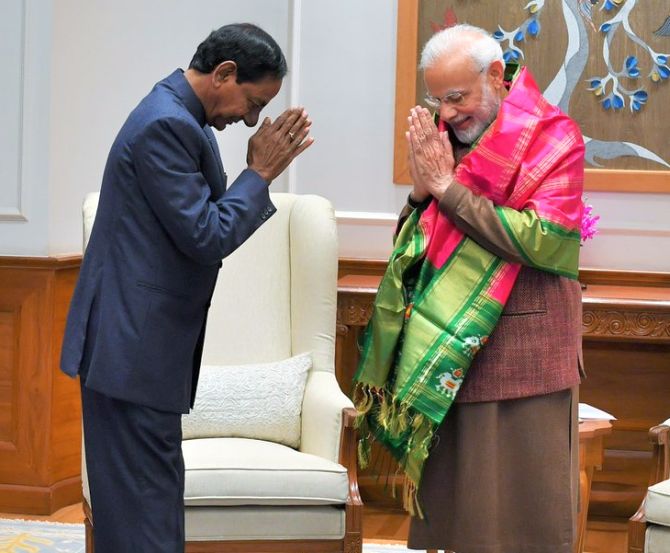 "No animosity, no friendship", K Keshava Rao, who was retained as Parliamentary Party leader on Thursday said, when asked about the Chief Minister K Chandrasekhar Rao-led outfit's policy towards the National Democratic Alliance government.

The Telangana Rashtra Samiti had backed the NDA on demonetisation, GST and in the elections to the post of President and Vice-President during its last term.

Chandrasekhar Rao on Thursday shared his thoughts on the strategy to be adopted by party MPs in the Parliament session beginning Monday.

The TRS had aimed to sweep the recent Lok Sabha elections in the newly formed state, repeatedly asserting it would win 16 seats and its ally All India Majlis-e-Ittehadul Muslimeen one out of the total 17.

The BJP, which had a lone member from Telangana in the previous Lok Sabha, sprang a huge surprise winning four seats, while the Congress picked up three.

Expecting a hung Parliament, the TRS had since last year made efforts to forge a non-Congress, non-BJP federal front of regional parties which, however, largely remained non-committal.

The NDA's massive win dashed hopes of the TRS, which was keen to play a key role in formation of the government in the event of NDA and UPA falling short of the majority mark.

Nageswara Rao, who was TDP's parliamentary party leader from 2009 to 2014, had joined the TRS on the eve of the 2019 Lok Sabha elections.

A P Jithender Reddy was floor leader of TRS in the previous Lok Sabha, but joined the BJP after being denied ticket.

The TRS would also miss K Kavitha, daughter of the Chief Minister, and B Vinod Kumar, who had served as deputy floor leader of the party in the Lok Sabha.

Kavitha and Vinod Kumar, two prominent faces of the party, lost to BJP candidates in Nizamabad and Karimnagar constituencies respectively.

The TRS has six members in the Rajya Sabha.