Public grief gave way to outrage as angry people raised slogans against Bihar Chief Minister Nitish Kumar on Tuesday when he visited a hospital in Muzaffarpur district, where over 100 children had died so far due to acute encephalitis syndrome. 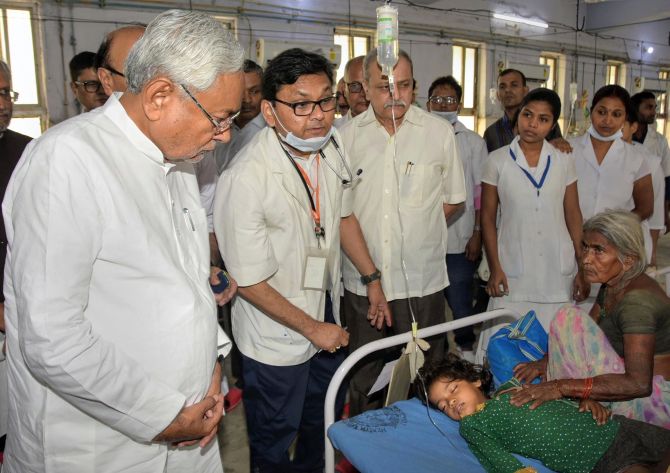 Kumar, who was away in New Delhi since Saturday, had returned to Patna on Monday evening and held an emergency review meeting on the AES situation with officials.

On Tuesday morning, the chief minister rushed to the Shri Krishna Medical College and Hospital in Muzaffarpur, where more than 300 children have been admitted with complaints of AES since June 1 and close to 90 of them died.

Kumar, Deputy Chief Minister Sushil Modi and local MLA Suresh Sharma went inside the ICU to meet the patients before holding an impromptu review meeting with the hospital authorities and other state Health Department officials.

In the meantime, scores of people gathered outside the hospital and started shouting slogans like "Nitish Kumar go back", as they vent their anger over the chief minister for visiting the area after the number of casualties had crossed the three-digit mark.

Speaking to journalists, they pointed out to a water tanker. "This is today's development. Things are being spruced up so that it makes a favourable impression on the chief minister," one of the protesters said. "Had the CM visited earlier, it would have made the officials concerned pull up their socks and many lives could have been saved."

Eyewitnesses said no sooner than Kumar stepped inside the ICU, parents and guardians burst into sobs and begged the chief minister to save their children who are battling for lives. Kumar reportedly consoled them and interacted with the ailing children, enquiring whether they were getting food and medicines in time.

Officials of the Union health department had visited the district over the weekend and clarified that AES was an umbrella of symptoms, unlike a viral infection like Japanese encephalitis. The symptoms include high fever, convulsions and extremely-low blood-sugar level.

Among the factors said to trigger the syndrome are malnutrition. Moreover, the lychee grown in Muzaffarpur is said to contain a toxin that can cause a drop in blood-sugar levels if consumed by a malnourished child. 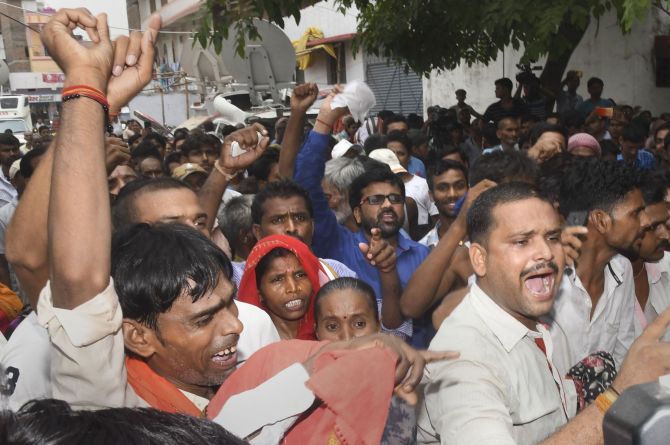 The Opposition, meanwhile, attacked the ruling National Democratic Alliance over the deaths.

In a series of tweets, former chief minister Rabri Devi asked whether Kumar, in power for about 14 years, should be held accountable for the deaths.

Without mentioning any name, the Rashtriya Janata Dal vice-president apparently took potshots at Union Minister of State for Health Ashwini Choubey and state Health Minister Mangal Pandey for their reported conduct during their visit to Muzaffarpur on Sunday.

While Choubey is said to have been dozing off while Union Health Minister Harsh Vardhan briefed the media, Pandey was reportedly enquiring about the score of the World Cup match between India and Pakistan at a review meeting with health officials.

State Congress president Madan Mohan Jha led a candlelight march in the evening in protest against the loss of lives because of the AES outbreak and the intense heat wave that has been reeling for the past few days.

Chief Secretary Deepak Kumar, who accompanied the chief minister to Muzaffarpur, briefed the media in Patna about important decisions taken by the state government.

"The CM and his team went to almost every bed and enquired the patients' parents. None of them complained about arrangements (at hospital), nor made any comment. We are satisfied with the doctors' work," the chief secretary said.

The official said Nitish Kumar had directed the implementation of both short-term and long-term measures to improve the situation at the SKMCH, which include upgrading 600 beds at the hospital to 2,500.

"Nine-hundred beds will be added by the next year, while the remaining will be added gradually. Besides, the existing 50-bed paediatric ICU will be upgraded to 100 beds," he said, adding that a rest house would be constructed for the people coming for treatment.

Stating that the reason behind the deaths was still not known, the chief secretary said a "socio-economic- environmental study" would be conducted of all the affected families, numbering over 400, from Wednesday.

The survey team will try to find out whether the affected families' overall condition, especially economic situation, level of sanitation, environmental issue (hot-and- humid conditions) were among the possible reasons for the outbreak of the disease. 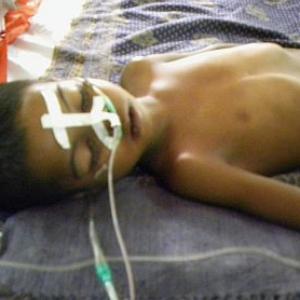 Only a miracle can end Gorakhpur's encephalitis nightmare