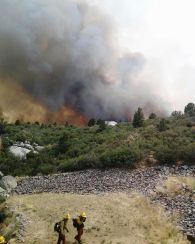 At least 19 firefighters have been killed battling a blaze in Yarnell town in central Arizona, with prevalent hot winds blowing across the United States making it one of the country's deadliest wildfire.

All the firefighters died Sunday while fighting to contain the Yarnell Hill wildfire, north of Phoenix, after the blaze destroyed the town forcing people to flee.

According to the officials, an estimated 500 homes have been ravaged by the ongoing fire that started Friday and is now spread over an area of 2,000 acres amid high temperatures, low humidity and windy conditions.

Residents of Yarnell Hill and PeeplesValley were being evacuated due to the blaze that is believed to have been started by lightning, officials said on a fire alert website.

Reichling expects 400 people to join the battle against the deadly blaze, which will also involve numerous water carrying aircrafts. About 250 firefighters, including two Type 2 crews, three Type 1 crews and four engines are at the scene at present, Reichling said.

The Red Cross has opened a shelter at YavapaiCollege in Prescott, the Sheriff's office said.

According to the US Fire Administration, there has been 43 firefighter fatalities reported so far in 2013 before this incident. A total of 83 firefighters died last year while on duty.

Image: Firefighters move away from the Yarnell Hill fire in Arizona on Sunday