With 12 new faces, Akhilesh expands UP cabinet to 59

With a dozen new faces inducted by Uttar Pradesh Chief Minister Akhilesh Yadav into his ministry on Thursday, the council of ministers is now a full-blown 59-member entity.

Political observers felt that the induction of the new entrants was done largely keeping in view the 2014 Lok Sabha election. Care was taken by the Samajwadi Party chief Mulayam Singh Yadav to handpick leaders from various castes in order to give the semblance of a better caste balance in the council of ministers. Strangely, however, there was not a single Muslim among the new ministers.

While expansion of the cabinet was on the cards for sometime, what came as a big surprise for all and sundry was the re-induction of Vinod Kumar, better known as ‘Pandit Singh’, who had been removed unceremoniously as a minister, following his alleged involvement in the kidnapping of the Bahraich district chief medical officer, barely a few months back.

However, Akhilesh made it sure that Pandit Singh got a “clean chit” before he was re-inducted. Talking to mediapersons soon after the swearing-in ceremony at the Raj Bhawan in Lucknow, the CM said, “Well, the inquiry committee that was set up against him has clearly absolved him of the charges leveled against Pandit Singh.”

Singh made no bones about expressing his gratitude to the entire Yadav family by touching the feet of Samajwadi Party patriarch Mulayam Singh and his younger brothers Shivpal Yadav, the all-powerful multi-portfolio minister and Ram Gopal Yadav, the party national general secretary and the 38-year-old chief minister.

The most prominent among others, who were ushered into the government, was Rajendra Chaudhary -- the only one to be rewarded with a cabinet rank. He has been the party spokesman for quite sometime and is known as a veteran Lohiaite, enjoying close confidence of Mulayam Singh Yadav. Vijay Kumar Misra was the only minister of state (independent charge).

This was the first expansion of the nearly 11-month old Akhilesh government that will complete one year on March 15 next. 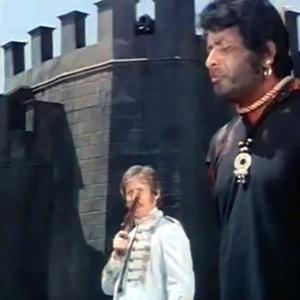