India has detected a new 'double mutant' COVID-19 variant in states like Maharashtra and Delhi as it recorded the highest ever one-day spike in cases and deaths from the disease this year with the Centre on Wednesday saying the surge in Maharashtra and Punjab is of 'grave concern'. 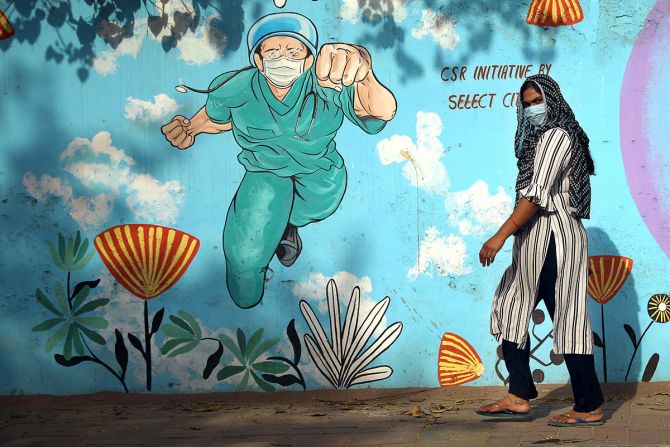 The Union health ministry said the new 'double mutant' variant of SARS-CoV-2 was detected in Delhi, Maharashtra and some other places in addition to the three 'variants of concern' -- first noticed in the United Kingdom, South Africa and Brazil -- that have been found in at least 18 states and union territories.

The ministry, however, said it could not be sufficiently established yet if these variants were behind the recent spike in COVID-19 cases in some states.

Maharashtra reported 31,855 new coronavirus cases on Wednesday, its highest ever single-day jump since the outbreak of the pandemic last year, a health official said in Mumbai.

Delhi reported 1,254 cases, a highest daily increase in over three months, according to the state Health Department.

National Centre for Disease Control (NCDC) Director S K Singh said 771 cases of variants of concern (VOCs) have been detected in a total of 10,787 positive samples in 18 states and UTs which include 736 samples positive for viruses of the UK (B.1.1.7) lineage.

Also, 34 samples were found positive for viruses of the South African (B.1.351) lineage and one sample for the Brazilian (P.1) lineage.

In addition to these, some other variants, including the double mutant one, have been found in some states and UTs such as Maharashtra and Delhi and need to be further analysed and investigated for establishing any epidemiological correlations, he said.

Genomic sequencing by the Indian SARS-CoV-2 Consortium on Genomics (INSACOG) and epidemiological studies are continuing to further analyse the situation.

There are only three variants of concern, detected in the United Kingdom(UK), South Africa and Brazil, he clarified.

"Till now no linkage has been established to say that the surge that we are seeing in different states is directly because of only mutations," he said.

Singh said there are various reasons behind a surge.

"Currently, the SARS-CoV-2 variants detected in the community have been prevalent for last 6-8 months and they are distributed in over 70 districts of our country.... Various states that are witnessing a surge in cases have revealed different mutation profile, post-sequencing," Singh told a press conference in Delhi.

Genomic variants of various viruses are a natural phenomenon and are found in almost all countries, the health ministry highlighted in its statement.

Genome sequencing and analysis have been carried out on samples from arriving international travellers, contacts of those positive for VOC and community samples from most of the states at INSACOG partner laboratories, it stated.

'Though VOCs and a new double mutant variant have been found in India, these have not been detected in numbers sufficient to either establish or direct relationship or explain the rapid increase in cases in some States,' the ministry said.

India recorded 47,262 fresh coronavirus cases in a day, the highest single-day rise so far this year, taking the nationwide tally to 1,17,34,058, the health ministry said.

The active caseload registered an increase for the 14th day in a row and was put at 3,68,457, comprising 3.14 per cent of the total infections, while the recovery rate further dropped to 95.49 per cent, the ministry data updated at 8 am on Wednesday showed.

The daily rise in infections was the highest recorded in 132 days, while the country's COVID-19 death toll increased to 1,60,441, with 275 new fatalities, the highest in around 83 days.

The number of people who have recuperated from the disease rose to 1,12,05,160, while the case fatality rate stood at 1.37 per cent, the data showed.

Union Health Secretary Rajesh Bhushan told a news conference that the Centre held a meeting with health officials of Maharashtra and Punjab on Saturday to talk about refinement in their strategy to tackle the surge.

"Two states are of grave concern which showed recent surge in cases. First is Maharashtra and second is Punjab. Maharashtra reported over 28,000 cases. The top five districts are Pune, Nagpur, Mumbai, Thane and Nashik," he said.

Punjab is a cause for worry because the number of new cases are disproportionately high compared to its population, he said.

Bhushan said there are other states too which are a matter of serious concern. They are Gujarat, Madhya Pradesh, Karnataka, Tamil Nadu, Chhattisgarh and Chandigarh which have recorded a surge.

Gujarat recorded 1,790 new coronavirus cases on Wednesday, its highest one-day rise since the pandemic began, an official said in Ahmedabad.

Bhushan said there are roughly three per cent active cases of COVID-19 and these are concentrated mainly in 10 districts -- nine in Maharashtra and one in Karnataka.

Nine out of the top 10 districts with the highest number of active COVID-19 cases--Pune, Nagpur, Mumbai, Thane, Nashik, Aurangabad, Nanded, Jalgaon and Akola--are in Maharashtra and one, Bengaluru Urban, is in Karnataka, he said.

"We have to battle this second peak", he said, and stressed on following the COVID appropriate behaviour and using vaccination as a tool to curb transmission.

"Mask is as effective as the best vaccine in the world, why are we getting lax. Please get yourself tested, where tests are happening less, positivity is increasing. Large proportion of the population is susceptible," Paul told reporters.

Maharashtra, Punjab, Karnataka, Chhattisgarh and Gujarat together account for 77.44 per cent of the new infections, the health ministry said. 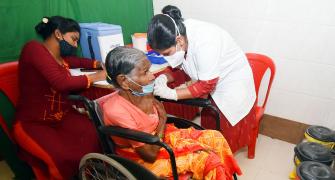 Vaccine for all above 45: Registration from April 1 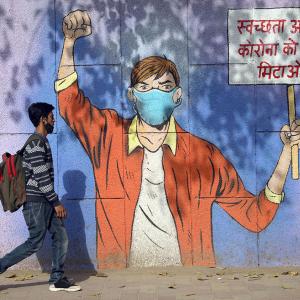