Senior Bharatiya Janata Party leader L K Advani on Thursday stressed the need to change the image of the average Indian politician in the minds of the public who perceive him to be the root cause of all problems.

"I often tell my party colleagues that the principle task before any person in public life is to contribute to change the image of average politician. Its not a pleasant image.... not a good image," he said at conference 'ThinkEdu' organized by The New Indian Express Group.

The octogenarian leader pointed out that politicians are always in the limelight in a democracy, because of which citizens feel they are the 'culprits' and the real cause of various problems.

The BJP leader said he had recounted it only to emphasise that this was the image that an average politician has acquired today. "Therefore, we should be very particular to see that gradually this image is changed."

Turning to education, he said students should be taught skill development and nation building.

"I feel in the field of education also, it should be of the kind which teaches every student to be proud of his country. I mean patriotism.... Education of the kind that empowers ethics and character to people", he said.

Flaying the ruling UPA government at the Centre for by and large "neglecting" eduction in the country, he voiced concern over there being no proper discussions on the subject even in Parliament.

Advani said economic policy is talked about a lot in India, particularly in political circles, on whether it should be liberalised or in state control and so on. However there are no discussions on the education system, he said.

Source: PTI© Copyright 2021 PTI. All rights reserved. Republication or redistribution of PTI content, including by framing or similar means, is expressly prohibited without the prior written consent.
Related News: Advani, BJP, UPA, New Indian Express Group, India
Print this article
'Only Rahul's work will decide if he can lead country'
Cong tries to project Modi as 'state leader'
'Concerns in field of education need to be addressed' 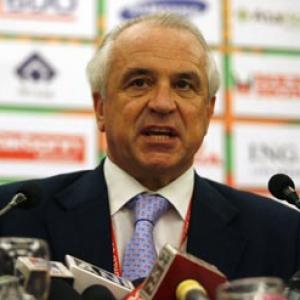