The Supreme Court on Thursday sought a response from the Centre and the Odisha government on a petition seeking to restrain the release of jailed Maoists in exchange for captive Biju Janata Dal MLA Jina Hikaka.

A bench of Justices T S Thakur and Gyan Sudha Misra asked the respondents to file a reply within two weeks.

The apex court initially expressed disinclination to issue any notices, but relented after counsel for Major General (retd) Gangurdep Bakshi persisted with the plea.

The petitioner submitted that already five Maoists had been released by the state government on Wednesday, to facilitate the release of the abducted MLA.

Responding to questions, the counsel said that the bail applications for the release of the Maoists was moved on their behalf by their supporters and the state government chose not to oppose it.

He submitted that the entire exercise was part of a collusion between the government and the Maoists.

At this stage the court remarked, "if that is so the scope of our interference is very limited. But you can go to the magistrate's court and challenge it."

However, the counsel persisted with the argument that at least notices be issued to the state and the Centre on the issue, following which the bench relented.

Solicitor General Rohinton F Nariman who was present in the court submitted that the petitioner's plea for formulation of a law to tackle the insurgency by the Maoists was a larger issue and hence not relevant to the present crisis.

However, the bench said since the Centre was a relevant party, it would like to issue notices to both the Central government and Odisha.

Hikaka was kidnapped on March 24 from Koraput district while returning home from a political meeting.

Bakshi, a counter-terrorism operations expert, had pleaded with the apex court that the state government should be restrained from releasing the Maoists as they were captured by security forces, which had to put their lives on stake to nab them.

He had submitted that his petition be given urgent hearing as the deadline set by the Maoists was to come to an end on Wednesday at 5 pm.

Agreeing to hear his plea, the bench had, however, pulled up Bakshi for moving the court so late.

"You can't come at the eleventh hour and plead for urgent hearing," the bench had said.

Bakshi had also pleaded that the guidelines framed by the apex court during the crisis arising out of abduction of mega star Rajkumar should be followed and the state government should not allowed to relent for the sake of one person.

The Andhra Odisha Border Special Zonal Committee of CPI (Maoist), which was behind Hikaka's abduction, had demanded the release of 30 prisoners, including hardcore Maoist Chenda Bhusanam alias Ghasi, accused of killing 55 policemen, in lieu of the 37-year-old tribal legislator's freedom.

Earlier, two Italians, Bosusco and Claudio Colangelo were taken hostage by Maoists on March 14, while trekking in the forests of the Daringbadi area in Kandhamal district.

61-year-old Italian tourist Colangelo was released as a "goodwill gesture" on March 25, while the Puri-based tour guide, Bosusco, was released on April 12 after 29 days of captivity after five jailed ultras were freed. 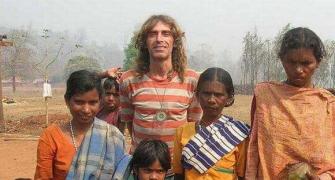