Name of alliance with Sena on Cong-NCP meeting agenda

Nationalist Congress Party and Congress leaders are expected to discuss a myriad of issues -- right from the name of their likely alliance if they join hands with the ideologically opposite Shiv Sena to the contours of their tie-up in the coming polls -- in their meeting scheduled for Wednesday, an NCP leader said. The Congress and the NCP are not comfortable with the name Maha Shiv Aghadi (a grand alliance comprising the Shiv Sena), the leader said.

"We don't want name of any party in the alliance. Even in the NDA (National Democratic Alliance) and the UPA (United Progressive Alliance) alliances don't have names of parties," the leader added.

The Congress-NCP alliance is known as Aghadi (front) and the Shiv Sena-BJP-RPI and other smaller parties are known by the term Mahayuti (the grand alliance).

The two parties would also discuss whether they would contest the civic body polls with the Shiv Sena if the three parties join hands to form the government in the state.

Polls to several civic bodies, including the Birhanmumbai Municipal Corporation, are to be held in 2022.

A meeting with the Congress scheduled on Tuesday to further discuss the possibility of government formation in Maharashtra was called off due to pre-occupation of Congress leaders with Indira Gandhi's birth anniversary events.

Congress leaders had requested that the meeting be postponed to Wednesday.

The Congress and the NCP have deputed leaders for holding talks on a possible alliance.

Accordingly Mallikarjun Kharge, Ahmed Patel and Congress general secretary K C Venugopal besides some state leaders and Praful Patel, Sunil Tatkare, Ajit Pawar, Jayant Patil of the NCP were to meet to explore the possibility of an alliance with the Shiv Sena in the state.

Pawar said if the NCP-Congress have to take a view on government formation, they have to first discuss it between themselves.

However, sources have said that the Congress and the NCP have been having detailed discussions on the CMP and the way forward for a possible tie-up with the Sena.

Maharashtra was placed under the President's rule on November 12 after no party or alliance staked claim to form government in the state.

A day after the President's rule was imposed, the Shiv Sena, Congress and NCP leaders held hectic parleys to work out a CMP for government formation.

At a joint press conference in Mumbai last week with the Congress leaders deputed by Gandhi to hold talks with him, Pawar had said the two parties would discuss and come up with a consensus on what should be the policies and programmes if the Sena was to be supported.

Congress leader Ahmed Patel had insisted that no final decision could be taken without the formulation of a CMP by the three parties.

In the October 21 Maharashtra polls, the BJP-Sena saffron alliance secured a comfortable majority by winning 105 and 56 seats respectively in the 288-member assembly.

The Congress and the NCP, pre-poll allies, won 44 and 54 seats respectively.

However, failing to evolve a consensus over the chief minister's post, the two saffron parties parted ways, with the Sena exploring the possibility of tying up with the Congress-NCP. 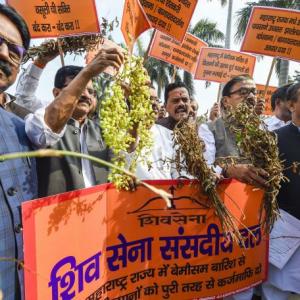