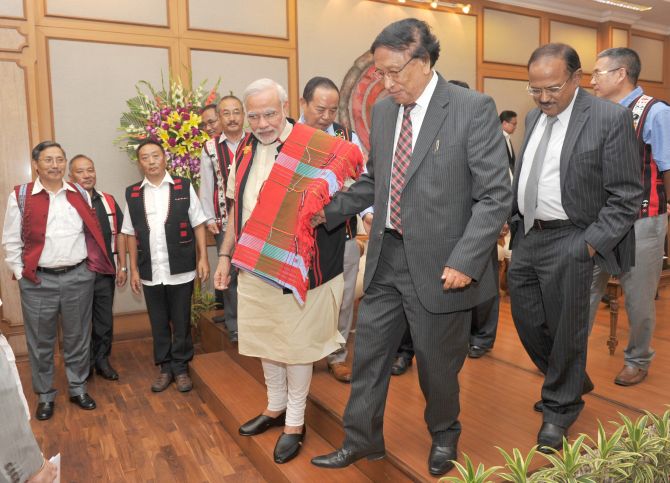 The Centre on Monday held a fresh round of talks with the National Socialist Council of Nagaland--Isak-Muivah faction (NSCN-IM), the major insurgent group in Nagaland, to finalise the Naga peace deal to end the seven-decade-old insurgency problem amid indications the dialogue will continue beyond October 31 when it was expected to conclude.

The talks were convened in Delhi in a bid to hammer out differences, particularly on the NSCN-IM's demand for a separate flag and Constitution for the Nagas, officials said.

A team of the NSCN-IM led by its general secretary Thuingaleng Muivah and the Centre's interlocutor and Nagaland Governor R N Ravi discussed possible ways to find an "honourable" solution to address the sticky issue of a separate flag and Constitution.

The issue of a separate flag and Constitution for the Nagas has become the main bone of contention between the two sides with the NSCN-IM strongly pressing for it and the Centre rejecting the demand.

"The dialogue, which lasted for more than four hours, remained inconclusive and both sides agreed to meet again soon. However, a final agreement between the NSCN-IM and the government is unlikely to take place by October 31," an official privy to the development said.

Ravi, in a statement, said last week that a mutually agreed draft comprehensive settlement, including all the substantive issues and competencies, is ready for signing the final agreement.

"Unfortunately at this auspicious juncture, the NSCN-IM has adopted a procrastinating attitude to delay the settlement raising the contentious symbolic issues of separate Naga national flag and Constitution on which they are fully aware of the government of India's position," he had said.

The framework agreement was signed on August 3, 2015 by Muivah and Ravi in the presence of Prime Minister Narendra Modi.

The framework agreement came after over 80 rounds of negotiations spanning 18 years, with the first breakthrough in 1997 when the ceasefire agreement was sealed after decades of insurgency in Nagaland which started soon after India's independence in 1947.

The central government has already rejected the NSCN-IM's demand for unification of Naga inhabited areas -- located in Manipur, Arunachal Pradesh and Assam. The three Northeastern states also vehemently opposed it.

Meanwhile, a grouping of seven organisations called Naga National Political Groups (NNPG) appealed to the elected representatives in Nagaland to avoid a 'neutral stand' and make clear their position.

Noting that the Centre was keen on finding a solution, the NNPG made the appeal in a statement released by its media cell on Sunday night.

The NNPG has been holding separate talks with the Centre since 2017.

"Unresolved matters should be decided through political and democratic process.... The position and status of elected representatives of Nagaland cannot remain lukewarm. They cannot choose to hide behind the boulders blocking the way," it said.

The Centre had set a deadline for conclusion of peace talks in the wake of the Naga society's demand for an early solution to the six-decade-old issue, the statement said.

"It is time for political parties in Nagaland to clear their stand in the interest of the Naga people.... If the political parties of Nagaland fail in their constitutional duties and obligations, they should resign and allow the Election Commission of India to derecognise the parties," it added.

Interlocutor Ravi is expected to hold dialogue with the NNPG in the coming days too. 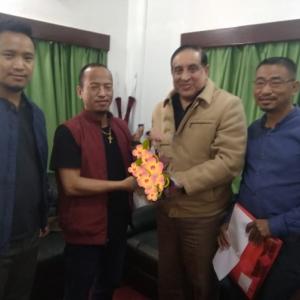