Source: PTI
Last updated on: August 23, 2012 18:16 IST
Mumbai Police Commissioner Arup Patnaik was transferred on Thursday amid mounting opposition clamour for his ouster over his alleged failure to prevent August 11 Azad Maidan violence, though the government termed it as a routine exercise.

Patnaik, a 1979 batch officer of the Indian Police Service, has been replaced by Additional Director General (law and order) Satyapal Singh of 1980 batch.

Patnaik has been promoted to the rank of the director general of police and posted as the managing director of Maharashtra State Security Corporation, state's Home Minister R R Patil said, describing the transfer as a "routine administrative process".

Seeking to downplay his shifting from the high-profile post, barely two days after a massive show of strength by Raj Thackeray's Maharashtra Navnirman Sena at a rally in Mumbai to demand Patnaik's ouster, Patil said the file for his transfer was first moved by the DGP's office on July 6.

A revised file was set in motion on August 8 and Maharashtra Chief Secretary Jayant Kumar Banthia had chaired a meeting in this regard on August 16, five days after the Azad Maidan incident where a protest called by Muslim organisations against alleged persecution of members of the community in Assam and Myanmar turned violent.

Two protesters were killed in firing and over 50 injured including more than 40 police personnel. Several police and media vehicles were vandalised and set ablaze, some women constables allegedly molested and three police weapons and ammunition snatched by the mob.

While Patnaik had come in for fulsome praise from Muslim leaders for exercising restraint in the face of grave provocation, the Opposition, particularly Shiv Sena and Raj Thackeray's MNS, went for his jugular.

Shiv Sena patriarch Bal Thackeray lashed out at the government for its handling of Azad Maidan violence, saying the Mumbai police was demoralised due to Patnaik's conduct.

"When the police were being attacked, when women police personnel were being molested, Mumbai's police commissioner Arup Patnaik was growling at those who were trying to control the radicals indulging in violence. The morale of the Mumbai police has been dented because of such a police commissioner," he said in an editorial in party mouthpiece Saamana.

"I am standing here to express solidarity with our brothers and sisters in the police force and the media and to demand immediate resignation of Home Minister R R Patil and police commissioner Arup Patnaik," said Raj Thackeray while addressing a massive MNS rally on Tuesday.

"They (Patil and Patnaik) have played with the morale of the police. Our policemen kept waiting for instructions to control violence. When a DCP got hold of a rioter, an abusive Patnaik told him to let off the offender," Thackeray said.

Patnaik, however, rejected allegations of being "soft" on vandals and defended his action, saying "facing a few stones ourselves" was better than following a more aggressive course.

"When I came in, I found my entire force running helter-skelter. They had guns..SLRs and hands on the trigger. Had they fired 200-300 people would have died. My entire aim was to stop my people from firing because I had handled the 1992 riots as DCP...what happened? 188 people died on the first day," Patnaik had said fending off criticism and explaining reasons for restraint.

There were reports that Chief Minister Pritiviraj Chavan was not inclined to remove Patnaik now as it would send a message that the government had succumbed to pressure from the Thackerays.

However, the fact that Patnaik's removal would somewhat blunt the opposition's attack, also directed against Patil, might have forced his hand.

Later, speaking to the media, Patil trashed suggestions that there was a link between Azad Maidan violence and Patnaik's transfer and that the move would demoralise the upright officer.

On the contrary, "when there are demands for his resignation and suspension, promoting him to the rank of DG will enhance his morale," the minister said.

Patil said the promotion-cum-transfer was part of the administrative process under which the then DGP had moved a proposal in July for increasing the posts of director general rank officers in the state from four to five.

After detailed discussions it was decided to create an additional post of DG to head the State Security Corporation set up after the 26/11 Mumbai terror attacks, he said, adding since Patnaik was the seniormost additional DG, he was the natural choice.

About Patnaik's successor Satyapal Singh, the minister said though the officer was removed as the commissioner of the Pune police after the German Bakery blast, "his overall performance was good in Pune and Nagpur".

Asked about the timing of the transfer, which came amid mounting Opposition demand for Patnaik's removal, Patil said, "Important administrative decisions have to be taken after due consideration." 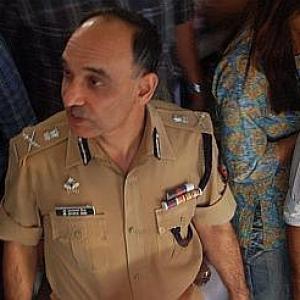