Were Wednesday's triple blasts in Mumbai a joint operation by Indian Mujahideen modules from Hyderabad, Bengaluru and Jharkhand? This is what the investigations point towards at the moment, reports Vicky Nanjappa.

Inputs point out that around 14 boys of the Indian Mujahideen were picked to carry out the triple blasts that rocked Mumbai on Wednesday, killing 17 and injuring 140 others.

The National Investigating Agency, which is working on these leads, has already conducted a raid in Ranchi at the residences of some of the members of the banned Students Islamic Movement of India.

The NIA sleuths have been in Karnataka since Thursday where a probe into the activities of both the IM and the SIMI are taking place. However, very strong reliance has been placed on the intelligence inputs from Hyderabad where it was said that the boys were from these three places.

After examining the CCTV footage that the police have got, it was concluded that the boys who possibly planted the bombs were not locals.

Further investigations have revealed that the Mumbai operation was planned in January and intelligence inputs from Hyderabad suggested that in February. However, it became extremely difficult to track these people since all through the operation they never used cell phones or email. It appears that they only met in person.

This was a deliberate ploy on their part since intelligence inputs can be picked up very easily if they tend to communicate through phones or emails. The police had said on the day of the blast that there was no specific input regarding these boys as there were no communication records of the operation.

An Intelligence Bureau official from Hyderabad says that there has been regular movement of some youth in the past one year and the various interrogation reports of IM operatives such as Salman and the rest did give an indication that the IM was trying to strike again.

Salman was specific when he told the Delhi police that they wanted to carry out a series of blasts and wanted to re-commence operations from Uttar Pradesh which they eventually did at Varanasi last December.

The NIA would probe these IM operatives again for further clues apart from launching a manhunt for the youth who carried out the serial blasts on Wednesday.

While the IM modules in Bengalauru and Hyderabad are considered to be very strong, the one at Jharkhand is a relatively new one.

The Bengalauru module was always under the scanner following the blasts in the city in 2008. Hyderabad, which was a hub for the Harkat-ul-Jihadi Islami, has been showing traces of IM activity in the past two years. 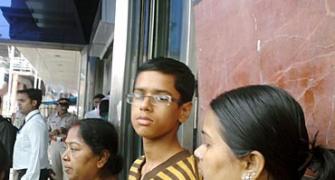 All the while you push away the pain, the shock