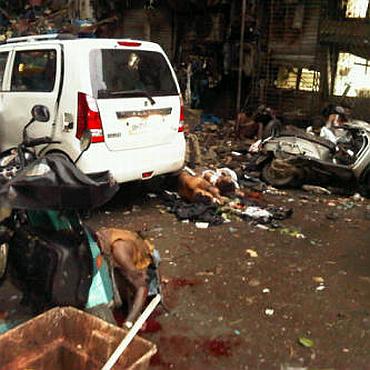 Apoorva Mehta, a diamond merchant, saw the aftermath of the blast at Opera House in South Mumbai on Wednesday evening. This is his account

"The blast at Opera House happened just 50 metres away from my window," says Apoorva Mehta, a diamond merchant whose office is in the middle of the Panchratna and Prasad Chambers buildings.

"Through a by lane, which we call Tata Lane, behind Roxy theatre you can go to both places. Thousands of diamond merchants work in both these buildings. Every day, for decades, after 6 pm traders loiter around Tata Lane and eat snacks like Bhel Puri, Sev Puri and sandwiches on the road. Today also, some 1,500 people were standing and eating or doing business. It's very common in our profession to do business on the road. We have always been doing business like this."

"It shook my office, computer and everything. I was shaken up. I could see smoke outside and also fire. The entire office was shaking as if it had been attacked physically."

The initial reaction, Mehta says, was that some people thought some air-conditioner in an office or maybe a gas cylinder had exploded.

"We were so scared that the first thing we did was to close the main gate," Mehta continues. "Our building's security, which is usually very high, was put on alert. We closed all the gates of the building. The diamond trade is too risky."

He says everyone around him was "numbed" by the blast. After about five minutes, people started calling up family, friends, loved ones.

"After about 15 minutes, the fire brigade, police and ambulance came. I went down to see the sight. Oh my God! I could not believe my eyes! I will never forget it! I saw blood everywhere," Mehta says. "I saw a hand cut off from someone's body. I saw injured limbs, and many people were seriously injured on the head. I could not believe the destruction that a bomb blast can bring!"

"I still can't believe I saw people dying like this. Why? Why? I saw people crying for help. I could not control myself. It was a terrible sight. Nobody should see the sight of a bomb blast. It's pure destruction."

Mehta says he saw an unusually high number of State Reserve Police "in and around our area today morning. I am not sure why. After the blasts, we panicked so much that we just wanted to go home. But we helped carry the injured to the Saifee and Harkisandas hospitals. After that, the area was cordoned off. I rushed home. I literally ran to meet my family. Thank God I am alive!"