The panic-stricken family of ousted Egyptian President Hosni Mubarak has reportedly fled Egypt for the luxurious refuge of their 8.5 million pound townhouse in London, a media report said on Thursday.

The leader's son Gamal, 47, is said to have spearheaded the move, flying to Britain on a private jet with his own family and 97 pieces of luggage, The Sun reported.

He owns a six-floor Georgian mansion, a stone's throw from Harrods in Knightsbridge, West London. According to rumours sweeping Britain's Egyptian community, the 82-year-old President and his wife Suzanne, 69, are also planning to head to the ritzy five-bed haven.

Egyptian baggage handlers at Heathrow are even said to have already spotted the First Lady arriving at the airport.

Mubarak is said to have amassed a 25 billion pound fortune for his family since grabbing power in 1981, the report said.

Suzanne, Gamal and older son Alaa, 49, have become symbols of excess and corruption in Egypt. Half-Welsh Suzanne has even been nicknamed Marie Antoinette after the opulence-loving queen who lost her head in the French Revolution.

The fashion-loving First Lady holds a British passport because mum Lily May Palmer was a Brit -- whose dad was a miner who went on to manage a colliery in Pontypridd.

Lily was working as a nurse when she met and married Egyptian medical student Saleh Thabet in North London in 1934. They then moved back to his country where Suzanne was born in 1941. 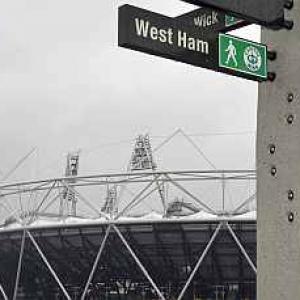