Mohammed Mursi was sworn in on Saturday as Egypt's first freely elected President, bringing his Muslim Brotherhood to power after 84 years of struggle, even as the military seemed determined to retain control.

Mursi, who was the winner of the presidential run-off, was officially sworn in before Egypt's High Constitutional Court as Egypt's first civilian president.

"I swear by the Almighty God to sincerely preserve the republican order and to respect the constitution and law, and completely care for the people's interest," 60-year-old Mursi said at the ceremony in the Constitutional Court.

"We aspire to a better tomorrow, a new Egypt and a second republic," Mursi said.

He became the Arab world's first freely elected Islamist president and Egypt's fifth head of state since the overthrow of the monarchy some 60 years ago.

In his first public speech at Cairo University after the oath, Mursi said, "God is greatest, above everyone" and pledged that Egypt would not reverse its new democratic course after Hosni Mubarak's fall.

Egypt's new president stressed on a Pan-Arab policy and also announced his support for the Palestinians until they "regain all their rights" and called for an end to bloodshed in Syria.

"I announce from here that Egypt, its people and presidential institution stand with the Palestinian people until they regain all their rights," Mursi said.

"We support the Syrian people. We want the bloodshed to stop," he added.

Mursi thanked the military for seeing through the presidential elections but pointedly mentioned the "elected parliament" several times in the address.

"The elected bodies will resume their functions and the army will return to their barracks, to their original role of protecting the borders," Mursi said, sending a veiled message to military leader Field Marshal Hussein Tantawi, who was among the audience.

As the families of those who died during the revolution cheered for Mursi, holding pictures of their children, the president addressed them, saying, "We have all of this because of the sacrifices your children made."

Mursi also expressed his appreciation for the role played by judges, the armed forces and police officers for supervising and securing the election process and ensuring its transparency.

"Egypt will not break away from the Arab and Islamic nation," said the president, stressing that from now on Egypt will not tolerate any violations against any of the Arab countries.

Attempts by any country to intervene in Egyptian affairs will be rejected, he said, and confirmed that Egypt will respect "international treaties and agreements," which might be an indirect reference to treaties such as the Camp David Accords.

The president reached out to both Muslims and Christians in "drawing a better future for Egypt and in fulfilling the goals of the revolution: freedom, social justice and dignity".

"It's time to look forward to a prosperous future for Egypt," said the president before leaving the podium amidst cheers.

Earlier today, he took his oath before the general assembly of the High Constitutional Court, composed of 18 top judges, lead by Farouk Sultan.

The ceremony was broadcast live by state television after an apparent change of plans. The state television had earlier announced that the ceremony would be recorded and aired at a later time. The national anthem played to mark the beginning of the ceremony, with Mursi sitting between Sultan and his deputy judge Maher El-Beheiry.

Farouk Sultan congratulated Mursi on behalf of the judges' general assembly, in an opening speech, ahead of the oath-swearing.

Mursi symbolically swore himself in on Friday, before tens of thousands of supporters, in the iconic Tahrir Square and vowed to fight for authority, defying the country's ruling generals.

Mursi is facing a very tough challenge as the military generals, who have ruled the country since former President Hosni Mubarak stepped down, have already curbed his powers.

Many political forces had called on Mursi to refuse to take the oath before the SCC, saying that doing so means accepting the controversial complementary constitutional
declaration the ruling military council has issued, curbing his powers.

But legal experts warned that if Mursi refused to take the oath, he would be acting against the country's formal legal measures.

Mursi, in a suit and burgundy tie, promised to lead a "civil, constitutional and modern state" in a short speech after taking the oath.

"We aspire to a better tomorrow, a new Egypt and a second republic," Mursi said.

Mursi was forced to take his oath at the court instead of in parliament after the military disbanded the Islamist-led House, following a court order earlier in June.

Mursi arrived in a small motorcade as several hundred supporters gathered outside the court to cheer the new president. His rise to presidency marks a dramatic reversal of fortunes for the Brotherhood that was banned under ousted leader Hosni Mubarak.

Mursi, in his first public speech on Friday, promised to be a "president for all Egyptians", adding, "You are the source of all authority and legitimacy." 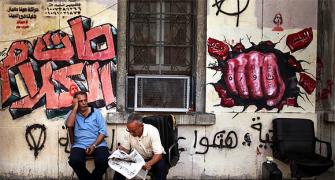