He dropped those perceived to be non-performers or whose integrity came into question, and also where it was felt they needed to learn a lesson or two in humility.
Archis Mohan reports. 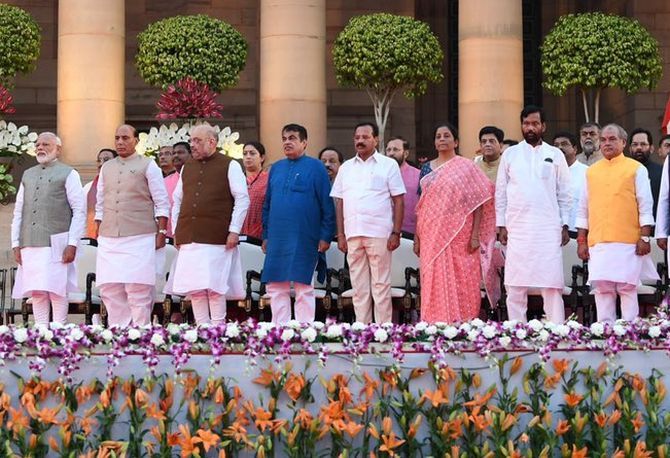 The story of portfolio distribution of a council of ministers is as much in who the prime minister picked for a particular portfolio as it is in those he did not.

The list of ministers sworn in on Thursday revealed that the prime minister rewarded MPs who won their respective Lok Sabha seats against heavy odds or included those known to hail from humble backgrounds.

He dropped those perceived to be non-performers or whose integrity came into question, and also where it was felt they needed to learn a lesson or two in humility.

It is, however, possible that some of the 37 dropped, especially those who have returned to the Lok Sabha, will make a comeback when the prime minister expands his ministry.

In 2014, Narendra Damodardas Modi expanded his ministry in November, when he added 21 ministers to the 40-odd who had taken oath of office on May 26 that year.

The message from portfolio distribution was that of a mix of continuity and change.

As many as seven economic ministries will now see new leaders -- the ministries of finance, commerce and industry, agriculture, telecommunications, civil aviation, and tourism.

In contrast, those in charge of the infrastructure ministries of railways, surface transport, roads, shipping, power, coal and petroleum in the previous government continue to remain part of the new Cabinet.

Significantly, the imprint of senior Bharatiya Janata Party leader Arun Jaitley, who is unwell and not part of the Cabinet, is evident in portfolio distribution.

Several ministers who count him as their mentor are in charge of key portfolios, including Nirmala Sitharaman, Hardeep Puri and Anurag Thakur.

The prime minister opted to transfer Nirmala Sitharaman from defence to finance and corporate affairs.

As in the ministry of defence, so in the finance ministry, Sitharaman follows in Indira Gandhi's footsteps.

She is only the second woman to be finance minister of India. Thakur is her minister of state.

Rajnath Singh, number two in the government, will now helm the defence ministry. He was home minister in the previous government.

Goyal will continue as railway minister and replaces Suresh Prabhu as minister for commerce and industry.

Nitin Gadkari will continue to handle the road transport and highways portfolio, but loses the ministry of shipping.

The prime minister, however, has decided to rely on Gadkari’s experience and expertise as an entrepreneur by handing him the MSME (Micro, Small and Medium Enterprises) portfolio.

With the Centre releasing the jobs data on Friday, the ministry would be crucial to spurring job growth.

Agriculture is another sector of concern. Narendra Singh Tomar replaces Radha Mohan Singh, who is no longer part of the Cabinet, as agriculture minister.

Tomar, rural development and panchayati raj minister in the previous government, will continue with that portfolio.

Dharmendra Pradhan will continue as oil minister while Mahendra Nath Pandey, the BJP's UP state unit chief, is the new minister of skill development and entrepreneurship.

The Shiv Sena, the BJP's oldest ally, retains the heavy industries and public enterprise ministry, but with the change in personnel. Arvind Sawant has replaced Anant Geete here.

The prime minister has reposed faith in some ministers of state with independent charge, particularly those who implemented key schemes of his previous government.

Former bureaucrat R K Singh continues to be power minister. Hardip Puri will not only continue to handle the housing and urban affairs portfolio, but also has the additional responsibility of the ministry of civil aviation with independent charge.

Gajendra Singh Shekhawat, who retained his Jodhpur seat by defeating Vaibhav Gehlot and is considered the BJP's new star in Rajasthan, is the new Cabinet minister for Jal Shakti, which comprises water resources, river development and Ganga rejuvenation.

Ministers like Harsh Vardhan and Prakash Javadekar have returned to their initial portfolios of Modi government 1.0.

Javadekar has returned to environment and forest and will also handle information and broadcasting, while Harsh Vardhan has returned to the ministry of health, but also continue to handle the science and technology portfolio.

Ravi Shankar Prasad, who has debuted in the Lok Sabha after long years in the Rajya Sabha, retains his portfolios of law and justice, communications, electronics and information technology.

D V Sadananda Gowda, in recognition of the BJP's good performance in Karnataka and with an eye on the state's caste balance, is minister of chemicals and fertilisers, while state colleague Pralhad Joshi is the new Cabinet minister for coal and mines as well as parliamentary affairs.

The late Ananth Kumar, who was also from Karnataka, was minister for both chemicals and fertilisers as well as parliamentary affairs in the previous government.

Haryana, Maharashtra and Jharkhand, three states scheduled for assembly polls by October, have representation in the council of ministers.

With an eye more on optics, several known to hail from humble backgrounds are ministers of state, including Odisha's Pratap Chandra Sarangi, Assam's Rameswar Teli and Rajasthan's Kailash Choudhary.

According to an analysis by the Association for Democratic Reforms, the electoral watchdog, the number of ministers facing criminal cases has increased from 31% in 2014 to 39% in 2019.

Sarangi, associated with the Bajrang Dal, whose activists had killed Christian missionary Graham Staines in Odisha's Keonjhar in 1999, leads the way. He faces seven cases of what the ADR terms 'serious' Indian Penal Code sections, and 15 other cases. 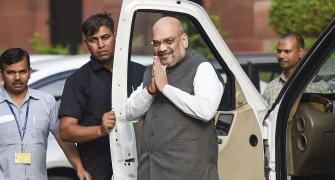 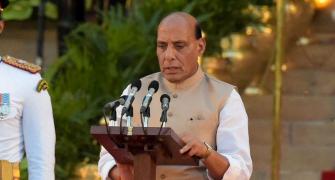